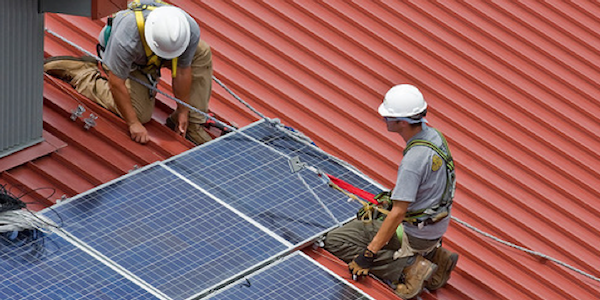 As the American Legislative Exchange Council (ALEC) prepares to meet in Dallas this week, the Center for Media and Democracy has uncovered new evidence that Edison Electric Institute (EEI) -- the trade association for the U.S. utility industry -- has been funding ALEC's legislative assault on solar energy.

Although ALEC recently proclaimed that it was being falsely portrayed as "anti-clean energy," these latest revelations confirm that ALEC continues to pursue a polluters' wish list, despite its PR pronouncements.

As documented by Suzanne Goldenberg and Ed Pilkington in The Guardian late last year, ALEC has been peddling legislation designed to increase costs for Americans who have invested in solar panels for their homes and businesses, which ALEC's rep attempted to label as “freeriders.” Through ALEC's bill and campaign, the group has been pushing changes to state laws that would increase costs for homeowners with solar who sell excess energy back to the grid, known as “net metering.”

The CMD documents underscore what Gabe Elsner of the Energy & Policy Institute has uncovered, which is that EEI is a prime player in ALEC -- footing the bill and calling the shots on the anti-renewable agenda. This shows that some powerful utilities -- which include public and private entities -- are backing ALEC's extreme agenda, not just global coal and oil corporations.

At the ALEC “Spring Task Force Summit,” held in Kansas City, Missouri, in May, legislators and lobbyists sat down together to eat lunch and hear about the threat of solar.

As reported previously by Wisconsin state Rep. Chris Taylor -- a Democrat who has written about ALEC's extreme agenda -- during the sponsored ALEC lunch, “legislators from Utah and Oklahoma bragged about slowing the development of solar energy in their states.” She noted that Minnesota state Rep. Pat Garofalo, a Republican, actually told the room “solar is dumb.”

Now it is known that, according to emails recently obtained by CMD through open records requests, the legislators’ lunch for the anti-solar agenda was sponsored by EEI.

ALEC offers a range of sponsorship options for its corporate clients and funders. An ALEC document obtained by CMD, lists the 2013 price for a policy workshop during an ALEC conference at $25,000 - $40,000. No price was listed for a session at which participants would also receive lunch, although presumably a lunch workshop's cost could be even higher. It is a small price to pay, however, to capture an audience of legislators from across the country along with food and drink.

According to Elsner, who works for a Washington D.C.-based think tank that conducts research on fossil fuel industry lobbyists, EEI also helped develop the ALEC model legislation on net metering.

Captured on video by Elsner, Rick Tempchin -- Executive Director, Retail Energy Services, at the Edison Electric Institute (EEI) -- confirmed that they worked with ALEC to develop the “model” legislation, which was formally adopted by ALEC in January 2014.

"EEI and its member companies join ALEC to advance an agenda that protects the utility industry’s profits at the expense of ratepayers,” Elsner told CMD. “That’s why EEI funds ALEC. The growth of cheap clean energy is a threat to the utility industry’s bottom line, and ALEC is a useful tool to lobby state legislators for special interests trying to squash the clean energy market.” 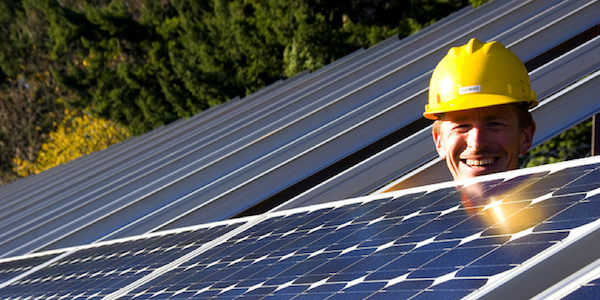 The U.S. solar industry is booming, with a 60% increase in-home solar installations in 2013, resulting in reductions in carbon pollution, and a large number of well-paying solar-installation jobs.

Business Insider recently reported there are now more people employed in the solar sector in the U.S. than there are coal miners.

This growing solar market represents a threat to the long-held monopoly on electricity production held by utilities. EEI represents companies that generate seventy percent of the electricity in the United States, with thirty-seven percent of the total generated from burning coal and thirty percent from "natural gas," which is predominantly methane -- a "potent" carbon in terms of its effect on warming temperatures.

In addition to its anti-solar work to help charge solar customers more, ALEC has also been attempting to weaken or fully repeal so-called “Renewable Portfolio Standards” – which are state laws that require utilities to provide a certain percentage of electricity from renewable sources at some set point in the future. ALEC's bill adopts the Koch "freedom" frame for public policy by calling this legislative agenda the “Electricity Freedom Act,” although it would greatly undermine state efforts to free Americans from over-dependence on fossil fuels that are contributing to the climate and ocean changes underway.

ALEC's task force on this issue was previously led by staffer Todd Wynn, who is now at EEI and who echoed the Charles Koch playbook in claiming that state efforts to decrease reliance on fossil fuels and increase the use of cleaner energy was supposedly a "crony capitalist" policy.

The language for the Electricity Freedom Act was brought to ALEC by the Heartland Institute, an Illinois-based operation that itself receives funding from the fossil fuel industry, and is probably best known for its extremism in comparing people who believe in climate change to the Unabomber Ted Kaczynski.

One of Heartland's key spokespeople peddling its effort to derail initiatives to address climate change, James Taylor, was recently discredited in the landmark Showtime series "Years of Living Dangerously." Taylor claimed to interviewer America Ferrera that he was a scientist because he had taken some science classes in college. As Connor Gibson of Greenpeace noted, by the Heartland definition almost everyone is a scientist. (CMD's research and its Executive Director, Lisa Graves, was featured in the film along with the investigations of Brendan DeMelle of DeSmog blog.)

On the Agenda in Dallas: “How to Think and Talk About Climate and Energy Issues”

Documents obtained by CMD, and first reported by Suzanne Goldenberg of The Guardian in May, show that ALEC has conducted monthly conference calls with lobbyists and legislators, encouraging lawmakers to activate their state’s Attorney General to litigate the proposed standards.

It has also been promoting a number of bills over the past 12 months on this subject, and ALEC will consider a new proposed bill at its Dallas conference this week titled “Resolution Concerning EPA’s Proposed Guidelines for Existing Fossil Fuel-Fired Power Plants" and ALEC is providing political messaging to its legislative members in a new session called “How to Think and Talk About Climate and Energy Issues.”

In addition to financial support from EEI, ALEC also receives funding from the coal giant Peabody Energy, ExxonMobil, Shell, BP, Koch Industries and other fossil fuel companies. The corporate co-chair of ALEC’s Energy, Environment and Agriculture task force, which helps set the agenda for the task force, is Paul Loeffelman, a lobbyist with American Electric Power (AEP) which is a member of EEI. AEP generates sixty percent of its electricity from burning coal.

The co-leader of the Congressional Progressive Caucus, Rep. Raul Grijalva, has called on the Interior Department to investigate the influence of AEP and other corporations on these policies.

CMD asked ALEC to comment on what EEI received in return for its cash, but ALEC’s Senior Director, Communications and Public Affairs, Wilhelm Meierling refused to answer questions about EEI’s funding, beyond confirming that they are a member.

In a statement, Meierling told CMD: “All work conducted at ALEC is led by out (sic) public sector members and any resulting resolutions are approved by the board of directors, comprised solely of legislators.”

Stung by criticism that ALEC resembled a "pay to play" operation, ALEC has attempted to re-brand itself as a "legislator-driven organization,” publicly announcing a new rule that only legislators can propose ALEC “model” bills. However, corporate lobbyists and politicians vote as equals on those bills at ALEC task forces where, as Dana Milbank colorfully noted, the press is barred despite ALEC's PR claims. Additionally, CMD subsequently uncovered documents showing how lobbyists distribute bills to ALEC legislators in advance and provide a detailed script so legislators could advocate the legislation at ALEC as if it were their own ideas.

Although ALEC has removed its "Top 10 Myths About Global Warming" from its site as part of its public relations remake, ALEC's prior sessions have included climate change denialist propaganda such as "Warming up to Climate Change," as reported by then-Wisconsin state Rep. Mark Pocan, who now serves in Congress. He observed that session and wrote for The Progressive how ALEC lawmakers lapped up claims that increased carbon dioxide is good for you.

Just last year, ALEC featured a weather personality who claimed that the planet was getting colder, despite the severe melting of ice in polar regions, where fossil fuel companies are expanding their investments.

It remains to be seen what messages ALEC politicians will be told they should echo at this year's conference.

Lisa Graves, the President of The Progressive/CMD, contributed research to this article.

DUMB ! I think you are referring to the Solar Nay sayers No one is this Ignorant ! Unless you are a Politician w/ anti Solar Agenda