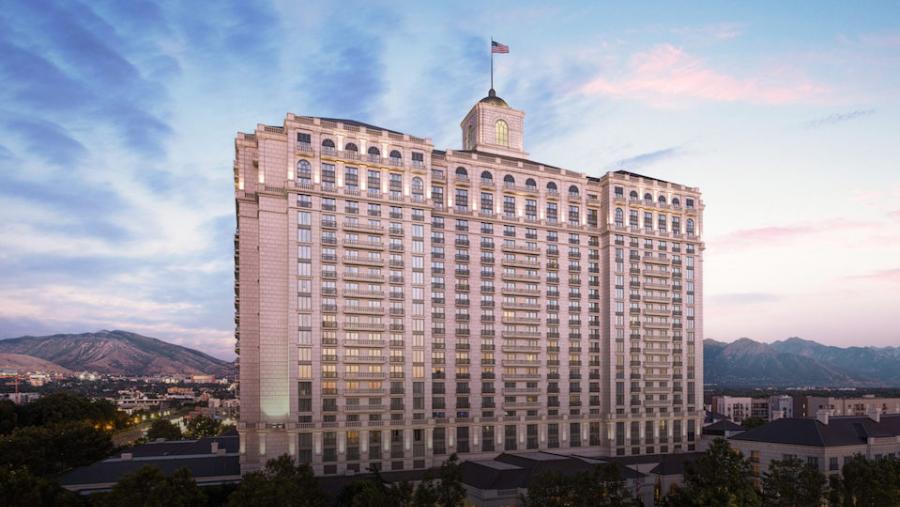 While Trump is no longer in office, ALEC members still wearing their MAGA hats can participate in Trump-themed trainings such as, "Achieving and Using Political Power: How You Implement an America First Agenda," and "Writing the History of the Future: Messaging Strategies to Reclaim States' Power & American Exceptionalism."

The Annual Meeting kicked off on Monday with an "exclusive, invitation-only academy" for state lawmakers with the dark money voter suppression group the Honest Elections Project, where ALEC politicians were "to discuss the implementation of new election legislation" with three secretaries of state, among other "fun and educational" events, the Center for Media and Democracy (CMD) reported.

Special Program to Work on Radical Rewrite of U.S. Constitution

ALEC is extending its conference well into the evening on Friday this year to hold an "interactive academy" on rewriting the U.S. Constitution. Attendees will "learn how an Article V amendments convention will actually play out," and "cast their ballots to decide which ideas to pursue," an invite obtained by CMD details.

One of the goals of the tutorial appears to be to convince lawmakers that a runaway convention can be prevented, despite expert opinions that this is impossible.

"Once you have the convention, it is subject to nobody's control," Georgetown University Law Professor David Super told the AP. "It makes its own agenda. It makes its own voting rules that decides how long it lasts and how far it goes."

At the 2020 Annual Meeting, former Wisconsin Governor Scott Walker (R) detailed a legal strategy to force a convention to rewrite the nation's founding document even though at the time only 28 of 34 states needed had resolutions calling for one pending.

ALEC is already pushing constitutional convention calls for a balanced budget amendment and sweeping new limits on federal powers, but meeting attendees will also have the opportunity to consider a newly proposed convention call for a package of tax and fiscal reforms, including "abolishing the existing Internal Revenue Code," called the Application Under Article V of the U.S. Constitution to Propose an Amendment to Require Fiscal Limitations and Accountability for the Legislative and Executive Branches of the National Government.

The model application also seeks to combine the states that pass it with other balanced budget amendment convention calls in an attempt to reach the 34 states needed to convene a constitutional convention.

Meeting attendees will debate a number of policies framed around ending "energy discrimination." The radical Energy Discrimination Elimination Act would punish financial institutions and other companies that cease to do business with fossil fuel companies by barring the state from investing in them and denying them state business. The policy also includes an anti-boycott measure which prohibits government contractors from boycotting energy companies, even asking for "written verification" from companies stating that they "will not boycott energy companies during the term of the contract."

This model, as well as the Affordable, Abundant, Reliable Electricity Act, which seeks to protect all energy producers in the name of maintaining a reliable electrical grid, are being lobbied for by Randy Eminger, executive director of the Energy Policy Network, an email obtained by CMD details.

An advocate for "clean coal," Eminger describes his mission at Energy Policy Network as, "to support the continued use of coal-fueled power," in the email, and notes that "four other comrades from the industry" will be at the ALEC conference as well.

In keeping with ALEC's climate-denial history and pay-to-play work for fossil fuel giants, ALEC lawmakers will also vote on resolutions to oppose any government action to reduce carbon dioxide emissions, and oppose any restrictions on the use of fossil fuels to produce electricity.

Indeed, ALEC is even proposing a model bill, the Safeguarding Greenhouse Gas Regulatory Authority Act, to bar any state agency from regulating greenhouse gas emissions or entering into any regional compact without "specific legislative authorization.”

The Resolution Urging States to Establish Electric Vehicle Charging Stations as a Competitive Market Free From Utility Commission Regulation urges state utility commissions to forbid "regulated utilities from using electric customer funds to build its own fleet of electric charging stations," thereby removing crucial funds to expand the infrastructure a larger fleet of electric cars will need in the future. This will have the intended consequence of forcing people to continue driving gas-guzzling vehicles for longer than necessary.

ALEC is also introducing another preemption model bill around plastics, the Act to Establish Statewide Uniformity for Essential Plastic Regulations. Spun as a policy to ensure "essential" plastic products are available, the proposed bill would bar municipalities from banning or taxing plastic food wrappers and plastic water bottles. The measure follows a 2015 American City County Exchange (an ALEC offshoot) resolution that calls on local government not to regulate many single-use products, including, "reusable bags, disposable bags, boxes, cups, and bottles that are made of cloth, paper, plastic, extruded polystyrene, or similar materials."

Despite claiming to be for free markets, and in a move to satisfy the MAGA crowd at ALEC, a resolution and a number of discussions will take place at the meeting on regulating Big Tech.

The Resolution in Support of State Governments Upholding Free Speech on the Internet follows along the same line of Trump's suit against Facebook, Twitter, and Google over their supposed censoring and violation of his First Amendment rights. The resolution states, "American Legislative Exchange Council members support state legislatures protecting free speech on the Internet and implementing targeted, effective measures to prevent any public or private entity from censoring, blocking, or restricting free speech on the Internet or social media platforms for any reason other than sexual obscenity or excessive violence."

ALEC has fought long and hard to decimate unions, so it no surprise that it is asking members to consider the Fair and Accountable Public Sector Authority Act. In what can only be understood as a massive attack on working people and the wages, benefits, and workplace conditions obtained through collective bargaining, ALEC's model bill prohibits public employers from recognizing unions and from collective bargaining with unions.

The model bill goes further than ALEC's Comprehensive Public Employee Freedom Act, which would prohibit public employers from requiring workers in a bargaining unit to join the union or pay dues, and allow individual workers to bargain independently with their employer.

Yesterday, CMD reported on ALEC's role in the promoting state legislation designed to restrict what can be taught about history and race in the public schools.

At the meeting this week, ALEC politicians will debate the American Civics and History Act. In the name of promoting civics, the bill would force public schools to make all social science teaching materials available online; require "state or local Board[s] of Education to approve instructional materials prior to first use"; require public school students to take courses on U.S. history, civics, and state government; and make high school students take a civics test similar to the one used for new citizens.

The model also states that "No public school shall direct or otherwise compel a teacher or student to personally affirm, adopt, or adhere to any belief relating to a current event or currently controversial issue," and "controversial issue" is vaguely defined to encompass just about anything.

Following ALEC's presentation of its International Pioneer Award to Taiwan's President Tsai Ing-wen at the 2020 States & Nation Policy Summit in December, it is again wading into the politics around China and Taiwan.

ALEC members will debate the  Resolution to Prioritize Strengthening the U.S.-Taiwan Partnership to Enhance Global Supply Chain Security and Resilience with a goal of enhancing "global supply chain security for both sovereign democracies," and hear from Taiwanese Ambassador H.E. Bi-khim Hsiao.

Discussions regarding Taiwan's neighbor, China, strike a different tone. Attendees will participate in discussions titled, "US-China Relations: BFF (Friends) or BFF (Foes)," "The Future of China's Rise and What It Means to American Democracy," or "Chinese Influence Operations at the Sub-National Level: Spotting and Stopping Malign Influence in Your Backyard." In addition, there is a workshop on "Will China Overtake the US Economically?"

ALEC is putting forth a number of proposed measures aimed at blocking the President's agenda and queuing up a 10thAmendment legal battle between federal and state government powers.

The bill appears to be a product of ALEC's new Functional Federalism Working Group. The working group's leader, former Utah state Rep. Ken Ivory, in a late February meeting "floated three potential ways for state lawmakers to present a united front against the Biden agenda: nullification, or passing state legislation to invalidate federal actions that states believe are unconstitutional; the initiation of a constitutional convention that would pass amendments giving states more power; and the passage of non-binding resolutions reaffirming the U.S. Constitution’s Tenth Amendment, which declares that powers not explicitly granted to the federal government belong to the states, in state legislatures," Grist reported

ALEC is also targeting Biden's aid to the states as part of the American Rescue Plan Act (ARPA), which made available $350 billion in state and local recovery funds. ALEC's Statement of Principles on ARPA Aid to State Governments and Resolution Urging Congress to Let States Cut Taxes both recommend how the money should be spent.

ALEC usually provides a venue at its meeting for allies to reach its legislative members, and this meeting is no different.

On Thursday, the Christian Right Family Research Council is holding a "Values Action Dinner" at the hotel to promote anti-trans legislation in the states "to save adolescents from experimentation."

The legislation is likely based on Arkansas's SAVE Adolescents from Experimentation Act (SAFE Act), which was enacted in April after a veto override and bans gender-affirming medical treatments and hormone therapies for transgender youth.  The bill's primary sponsor, Rep. Robin Lundstrom, will be a featured speaker at the dinner. Following a suit filed by the American Civil Liberties Union, the SAFE Act was temporarily blocked by a federal judge last week.

Other Christian Right groups ALEC has provided space for at its meetings in the past include: Alliance Defending Freedom, National Association of Christian Lawmakers, and the National Pro-Life Women's Caucus, a project of Susan B. Anthony List.

Other new model policies to be introduced at the annual meeting include: