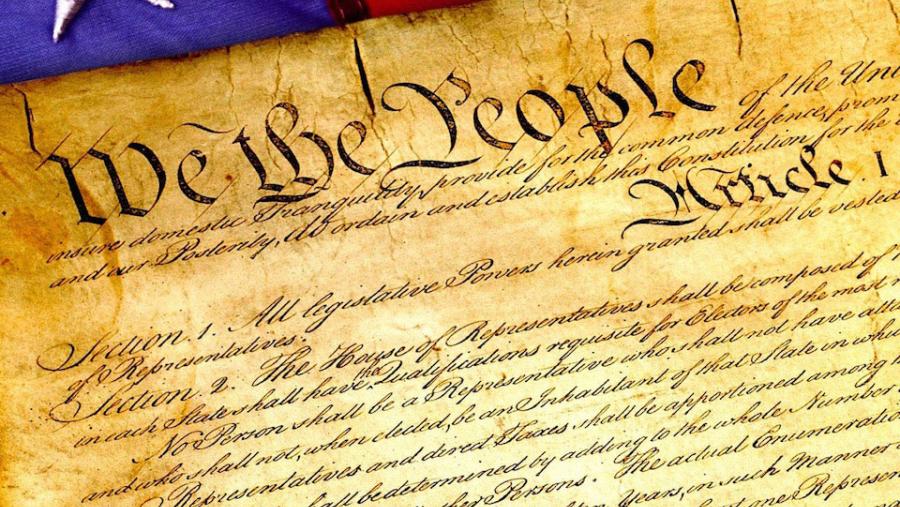 The Wisconsin Assembly passed a resolution calling for a rewrite of the U.S. Constitution on February 18 by a 60-38 vote, almost entirely along party lines. The measure, Assembly Joint Resolution (AJR) 77, now heads to the Senate, where its companion, Senate Joint Resolution (SJR) 57, has yet to move out of committee.

The effort is being spearheaded by Convention of State Action (COSA), a project founded by Mark Meckler and Eric O'Keefe and promoted by the American Legislative Exchange Council (ALEC). ALEC is a pay-to-play operation where legislators and corporate lobbyists meet behind closed doors to adopt model legislation on a broad range of public policy issues.

If this sounds familiar, it should. In 2017, Wisconsin lawmakers passed a similar resolution based off of an ALEC model that they claimed would limit a constitutional convention to requiring the federal government to balance its budget. Twenty-eight states of the 34 needed have passed similar measures to date.

"This joint resolution is much vaguer and broader, and would open up the door of any Convention of the States even faster and wider for a wholesale rewrite of our founding document, thus jeopardizing our fundamental rights," Matt Rothschild, Executive Director of the Wisconsin Democracy Campaign testified at the October 3, 2019 public hearing on the resolution.

Legal experts note that there is nothing in the Constitution that limits the scope of a constitutional convention once called and warn that a runaway convention could generate major changes to the balance of power between the states and federal government and undermine many rights and protections currently enjoyed by citizens of all states.

At the October committee hearing on SJR 57, Legislative Counsel could not offer certainty to Sen. Lena Taylor (D-Milwaukee) that delegates at a convention would not act outside their directed scope, saying, "Most of these questions about scope, are questions that are up to some debate."

Sen. Taylor then turned to the authors of the bill, saying, "Gentlemen, show me the guard rails. Show me the guard rails that make sure that we do not have a runaway convention with individuals and states that clearly show by their policies, disparate and racist treatment."

Following the Senate hearing, a public hearing was held in the Assembly's Committee on Federalism and Interstate Relations on November 13, 2019.

Convention of States president Mark Meckler attended that hearing. Meckler is the face of the COS campaign and has gone on the record saying that its goal is "to reverse 115 years of progressivism."

Meckler believes that the Constitution itself is the supreme law of the land, not how the courts interpret it. "[R]unaway courts do not provide the 'rule of law,' and they are not the 'checks and balances' our Founders envisioned," Meckler has written. His vision of constitutional revision is one in which states can defy Supreme Court rulings they believe stray from the Constitution's original intent. The upshot is that, if a right-wing constitutional convention is held, voting rights, the Civil Rights Act, the Environmental Protection Agency, the federal minimum wage, abortion rights, marriage equality, and many other rights could be placed at risk.

In the Assembly hearing, Representative Chris Taylor (D-Madison) asked questions of the COS volunteers and Meckler as to what they hoped to achieve if a constitutional convention is convened.

Meckler stated that it was not his intention to curtail any particular power of the federal government, but the intent is "to create a convention where the American people can have a discussion of these issues." Meckler added that, he does not "propose, support, or oppose, any particular amendments," and that COS "doesn’t have a particular agenda."

However, a 2016 Convention of States mock convention passed amendments on the rightwing's bucket list, such as easing the process to repeal federal regulations, requiring approval to increase the national debt, imposing congressional term limits, repealing the 16th Amendment's authorization for an income tax, limiting the Commerce Clause, and requiring a supermajority to impose federal taxes.

A nearly seven-hour video of the "historic simulation" is available on the organization's YouTube channel.

CMD asked Taylor to respond to Meckler's post. "I have nothing but respect for the people of Wisconsin who come to the Capitol to testify on various bills and issues and not one of them stated otherwise," Taylor stated.  "Mr. Meckler did not like my questions because he doesn't like the answers-and that is that his Tea Party effort to eviscerate our Constitution is an attempt to roll back civil rights, environmental protections and safety net programs that are popular and supported by the actual people of this state."

Meckler "refused to identify the out-of-state corporate interests that funds his efforts to elevate the power of corporate America over the power of everyday citizens," Taylor said.

Meckler is working very hard to get the COS resolution passed in the states. In August, COSA held its first Leadership Summit with "hundreds" of activists, state directors, and coordinators from all 50 states.

Wisconsin"s Eric O’Keefe serves on the board of all three organizations. O'Keefe is a right-wing political operative with strong ties to Charles and the late David Koch.

In state, O'Keefe is well known for being a target of the 2012-2015 "John Doe" criminal investigation into possible illegal campaign coordination between Wisconsin Governor Scott Walker, Wisconsin Club for Growth (of which O'Keefe is a director), and numerous other dark money groups, until it was ended by the Wisconsin Supreme Court in July 2015.

Funding sources for COSA are hard to uncover, but through a search of IRS filings, CMD found that COSF received $14.7 million from 13 foundations, donor conduits, and other nonprofits between 2010 and 2018. Over $12 million was funneled through three donor advised funds: Vanguard Charitable Endowment Program ($7.6 million), the Koch network-tied Donors Capital Fund ($2.5 million), and the Greater Houston Community Foundation ($2 million).

CSGA has three known donors, including  two groups associated with Leonard Leo, Trump's point person for stacking the federal courts with conservative activists, In 2016, Leo's Freedom and Opportunity Fund gave $2 million to CSGA, and the Judicial Crisis Network gave $110,000. The Koch-founded and funded Citizens for a Strong Economy contributed $10,000 in 2015.

The COS resolution passing the Assembly comes two weeks after a new national poll demonstrated that close to 60 percent of Republicans surveyed oppose changing the Constitution through an Article V convention.

Further, 70 percent of Republicans, and 60 percent overall of those surveyed, become less likely to support an Article V convention once they learn that it could result in changes to fundamental rights they hold close.

A date has not been set for a floor vote on the COS resolution in the Senate.

Don't believe the hype. The Article V Convention is a two-part process of proposal and ratification, and the latter requires 75%+ approval. Meckler and his astroturf organization can claim whatever they want, but their proposals will never achieve the necessary approval to become part of the Constitution. Why liberals are so afraid of this process when the only thing that has non-partisan support is electoral reform is a mystery. Armiak should be paid well for his fear-mongering. Get the facts at foavc.org
"Legal experts note that there is nothing in the Constitution that limits the scope of a constitutional convention once called and warn that a runaway convention" 1st, COS is an EXPLICIT call for a runaway convention. It's terrible and should be fought tooth-and-nail. 2nd, we've got a crying need for a 28th amendment to overturn both Citizens United and the doctrine of "Corporate Constitutional Rights" that was used to justify it. 3rd, several States have now called for Congress to pass such an amendment, and a LIMITED Article V convention if it does not do so promptly. 4th, not only do many other legal scholars conclude a convention could be limited to that issue, but obviously it is up to the States to make sure their delegates stick to the issue (and no one else). 5th, the real reason for this scaremongering is not to prevent a COS (which would be a mess that accomplished nothing), but to keep such a 28th amendment from passing! See "http://movetoamend.org".
Your facts are correct. It is my observation that COS will fail, not because they are pursuing the wrong agenda, but because they are partisan. An Article V convention may succeed when efforts are non-partisan. Many issues are favored by the people but no action is taking place in Congress. My effort is called 'vote on it'. Give the power to influence government to the people. And it starts with an Article V convention to amend the Constitution.
Wow. If ever there were a political hit piece this is it. The effort is organized at a national level by COS Action because legislation must be consistent across states. A few dozen volunteers in WI with no ties to the donors listed and thousands of concerned citizens who have written letters and signed petitions are REALLY behind this. Any other claim is pure falsehood. This ridiculous article attempts to imply nefarious intent to WI volunteers who are trying to get an Article V Convention Of States. It then goes on with the fear tactics of runaway conventions that worked in the 60's - 80's making ridiculous statements about what "legal experts" warn about without asking a simple question... how do these amendments get ratified? It takes 3/4 of the states with BOTH chambers approving it. A single chamber causes it to fail in the state. So 12 of 100 chambers are all that's needed to reject something. If 88 bipartisan chambers agree... we the people agree. Pure garbage.
Dave In your research you should review the difference between an Article V convention and a Constitutional Convention, they are NOT the same thing. Clearly you are uninformed and not afraid to let the whole world know.
The protection against a runaway convention is that the convention itself doesn't get to rewrite the constitution. The convention merely proposes amendments to the Constitution. This is 1 of 2 methods in the Constitution for amendments to be proposed, the other being Congress. Any amendments that come out of the convention must be ratified by 2/3 of the States to come into force. Left leaning folks aren't afraid of a Convention of States (which by the way, article author, isn't the same thing as a constitutional convention) per second. They fear a reduction in the power of the federal government, because they lean to the authoritarian side of the political spectrum and favor big government and centralized power.
My first comment incorrectly stated that only 2/3 of the States need to approve amendments; it's actually 3/4. So still, a "runaway convention" is literally not a thing.
Don't listen to this fear mongering hit-piece. The feds are obviously afraid of having their near limitless power reigned in by the people and the states.
If Washington played by the Constitution COS would be Un needed . I don't see this as changing the constitution but a return to it. Power that should be in congress is now in Scotus and executive branch. Also the executive branch has given its power to executive agencies .. DHS, DOD, HHS and more.