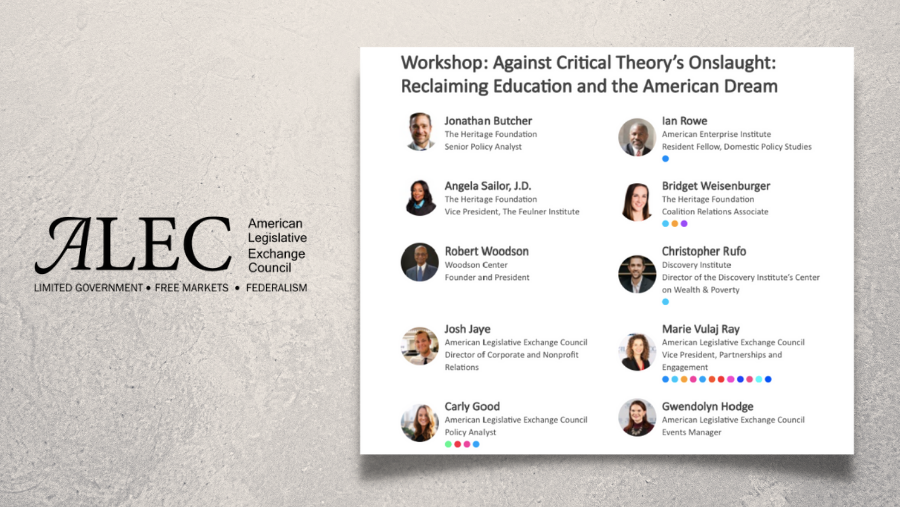 By Don Wiener and Alex Kotch

Republican efforts to ban the teaching of the history of racism in public schools picked up steam when the corporate "bill mill” the American Legislative Exchange Council (ALEC) hosted a workshop on December 3, 2020 called "Against Critical Theory’s Onslaught.”

The virtual workshop, part of ALEC’s annual States and Nation Policy Summit, included state legislators, corporate lobbyists, and staff from right-wing policy organizations and private foundations, according to an attendance list obtained and published by the Center for Media and Democracy (CMD).

"The 1619 curriculum is infecting our schools,” reads the workshop’s description. "Diversity training is taking over our workplaces. How do patriotic Americans respond?”

The group previously promoted "Stand Your Ground” legislation, which was tied to the 2012 death of the unarmed Black teenager Trayvon Martin. As a result, ALEC faced a donor crisis and member exodus and took a step back from social issues.

Critical race theory posits that racism is not just the result of individual bias but is the result of institutionalized laws and practices that create or reinforce discrimination. But right-wing politicians have misconstrued the term’s meaning and convinced many of their constituents that teaching an honest history of racism in America is akin to telling white students to hate themselves and their country.

"The Republican operatives, who dismiss the expositions of critical race theorists and anti-racists in order to define critical race theory and anti-racism, and then attack those definitions, are effectively debating themselves,” writes Prof. Ibram X. Kendi, director of the Boston University Center for Antiracist Research. "They have conjured an imagined monster to scare the American people and project themselves as the nation’s defenders from that fictional monster.”

"As of June 29, 26 states have introduced bills or taken other steps that would restrict teaching critical race theory or limit how teachers can discuss racism and sexism,” Education Week reported. "Nine states have enacted these bans, either through legislation or other avenues.”

Legislators pushing these bills seek to use a controversy they helped create for political gain, misinforming the public as to how race and the history of racism are taught in schools. The GOP is using critical race theory as a wedge issue in the 2022 midterm elections as it seeks to recapture the U.S. House.

The strategy is rooted in what Republican officials believe worked for them in 2020: tying Democrats in swing districts to a hyperemotional and tense local issue, even if it’s not something that Congress has much of a role in. In the last election, it was police funding and Black Lives Matter protests.

Federal lawmakers are also participating in the anti-critical race theory strategy. In June, congressional Republicans introduced legislation to cut federal funding for schools where teachers use lessons based on the 1619 Project, a New York Times series that reframes U.S. history by focusing on the long-lasting effects of slavery.

ALEC highlighted a New York Post opinion piece written by Heritage Foundation staff that argued, "The goals of the Black Lives Matter organization go far beyond what most people think. But they are hiding in plain sight, there for the world to see, if only we read beyond the slogans and the innocuous-sounding media accounts of the movement.”

is an outgrowth, and little more than a new version of, the Marxist ideology of class warfare with the end goal of societal collapse and the re-making of society. If you know history, it’s easy to both spot and identify. The problem for those confronting this potential catastrophe is how they are explaining their end goals for dealing with it.

HF 802, which mirrors the language in similar bills in other states, prohibits "race and sex stereotyping” in diversity training, defined as:

Ascribing character traits, values, moral and ethical codes, status, or beliefs to a race or sex, or to an individual because of the individual’s race or sex.

HF 802 passed the Iowa legislature, was signed into law by Republican Governor Kim Reynolds, and took effect on July 1.

Missouri state Rep. Brian Seitz attended the ALEC workshop and later introduced an amendment to a bill in his state that would ban the teaching of critical race theory. Seitz incorrectly claims that critical race theory echoes the 1619 Project argument that the country was not founded in 1776 but took its first steps as a nation in 1619 with the arrival of the first slave ship. His amendment died in the legislature, but he has promised to re-introduce it.

Another workshop attendee, Tennessee state Rep. Chris Todd (R), was one of two legislators to oppose Senate Joint Resolution 80, which would amend the Tennessee constitution to remove the exception to the ban on slavery and indentured servitude as a sentence for criminal punishment. In other words, prior to the resolution, which passed 81-2, Tennessee allowed slavery as a punishment for criminal offenses.

ALEC has often allied itself with far-right extremists, including white nationalists.

The group’s former Washington state chair Matt Shea participated in domestic terrorism, taking part in ​​three armed conflicts of political violence against the U.S. government, according to an investigation ordered by the state House. Despite repeated queries from CMD, ALEC declined to distance the group from Rep. Shea’s racist and extremist rhetoric and activities.

Other ALEC members have included an executive of an anti-immigrant hate group, a lawmaker who opposed integration of Arizona school because "there aren’t enough white kids,” and another who appeared on a white power advocate’s radio show.

In September 2018, CMD exposed far-right speaker David Horowitz, who said at a national ALEC meeting, "At the K-12 level, school curricula have been turned over to racist organizations like Black Lives Matter and terrorist organizations like the Muslim Brotherhood.” In the aftermath, ALEC claimed it "does not work on social issues.”

Following a campaign by 78 good government and civil rights groups that called upon ALEC companies to stop funding ALEC and reject Horowitz’s inflammatory remarks, Verizon quit the organization, stating, "Our company has no tolerance for racist, white supremacist or sexist comment or ideals.” AT&T and Comcast also left ALEC for the same reason.

In early January of this year, at least four current or former ALEC legislative members attended the rally and march in Washington, D.C., that led to the deadly pro-Trump insurrection.

CMD recently exposed six ALEC-affiliated lawmakers who were members of the neo-Confederate group Sons of Confederate Veterans. One of these legislators, Republican Sen. Dennis Baxley, co-wrote his state’s 2005 "Stand Your Ground” law.