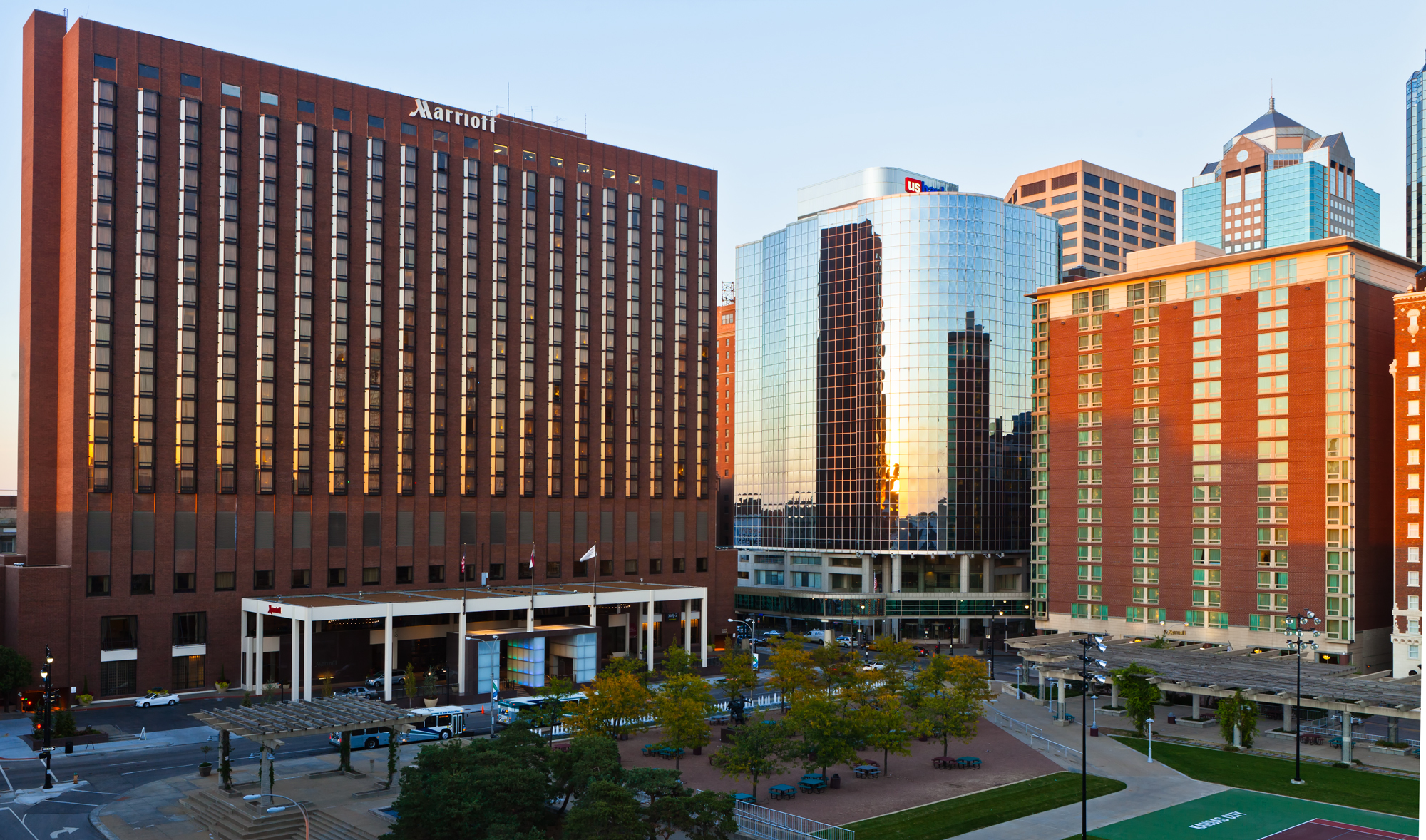 Yet at ALEC's Spring Task Force Summit this week in Kansas City, it is clear that corporations are still the ones calling the shots.

Electronic cigarette maker NJOY paid to join ALEC last year, according to internal documents published by The Guardian. (As the New York Times has reported in "Selling Poison by the Barrel," the liquid nicotine sold for e-cigarettes is highly poisonous in small doses, especially for children.)

Are we to believe legislators proposed either of these discussions?

Here's what else is happening at this week's meeting, held at Kansas City's swank Marriott hotel:

Why is a tax task force led by a cigarette lobbyist forming an education subcommittee?  Perhaps to advance tuition "tax credit" policies to subsidize charter and religious schools, a scheme dubbed "neo-vouchers" by critics.

"With conventional vouchers, the state effectively bundles tax revenue and distributes it as vouchers. With neo-vouchers the taxpayer and the nonprofits play that role, while the state backfills the funding, reimbursing the taxpayer," says critic Kevin Welner, a University of Colorado-Boulder professor who wrote a book on the topic.

ALEC's Education task force has several tuition tax credit new vouchers on the books, and at this week's meeting, it will consider adding an expanded “Educational Choice Tax Credit Program Act” to the ALEC library. The bill would allow a 100% tax credit for the first five years of the program, which effectively means that both corporations and individuals can entirely reroute their tax dollars from public schools and services to private entities. The credit is then ratcheted down to 50% over the following five years. The bill specifies that even parents who are currently paying for private school tuition can receive funding through the program.

These "neo-vouchers" have been spreading across the country more quickly than traditional vouchers. The tax credit model provides a way to funnel taxpayer dollars to private schools with even less public accountability than with regular vouchers, and to bypass state constitutional provisions that have stood in the way of some state's traditional voucher programs.

In Missouri, ultra-wealthy Rex Sinquefield has poured tens of millions of dollars into ballot efforts and front groups to enact similar neo-voucher tuition tax credit programs in the state, but thus far has been unsuccessful. (Read more about Sinquefield in the Center for Media and Democracy/Progress Missouri report released earlier this week).

Another proposal from the Tax and Fiscal Policy task force, the "Retirement System Board of Trustees and Employees Prudent Investor Act," purports to be a “prudent” measure, but bars pension funds from doing socially responsible investing. In recent years, for instance, unions like AFT and the AFL-CIO have invested $10 billion to create thousands of jobs repairing old infrastructure.

ALEC has long opposed socially responsible investing. For instance, during the 1980s ALEC was a vocal opponent of the anti-apartheid South African divestment movement, as Calvin Sloan has documented. It adopted a model resolution in the late 1990s opposing "socially conscious" investing, warning that "Today a particular company or industry may be unpopular, like alcohol or tobacco, but tomorrow's controversy could be animal rights, nuclear power, defense contractors, the oil industry, etc."

The tax task force is also considering "model" legislation (both a new proposal and amendments to a current bill) to require that states produce data points that make pension obligations look larger, a practice that facilitates ALEC's push for privatizing public pensions.

The amended "Promoting Transparency in State Unfunded Liabilities” requires states to calculate their pension liabilities in a manner that dramatically inflates them by assuming a risk-free interest rate, which at the moment are at historic lows. ALEC's overarching goal with regard to pensions is not that they go to the workers who earned them, but that they be wiped out in favor of private 401K-style plans.

This strategy is not only motivated by an effort to scapegoat and attack public workers and collective bargaining, but to destroy a major democratic force for corporate accountability. Public pension fund managers have been behind some of the biggest lawsuits holding corporate wrongdoers to account, including those involved in the 2008 financial crisis.

Since the late 1970s, ALEC has pushed "neo-Sagebrush Rebellion" legislation calling for states to assert control over public land -- an issue recently thrust into the spotlight after Nevada rancher Cliven Bundy, who owed a million dollars in unpaid fees for grazing on public land, rallied hundreds of armed militiamen to threaten federal Bureau of Land Management officials trying to enforce a court order. Congressman Raúl Grijalva has requested a federal investigation into ALEC and its role in undisclosed lobbying on bills that undermine federal authority over public lands.

The "Sagebrush Rebeliion" is framed in terms of state's rights and populism, but the money interests behind the movement come from the energy industry -- such as ALEC members Peabody Energy, Duke Energy, and American Electric Power -- which want to exploit the land for oil, gas, and coal extraction.

At this year's meeting, the ALEC Energy, Environment, and Agriculture task force will consider a "Resolution Concerning the Oil and Gas Lease Approval Process on Federal Land" calling for "opening more federal land to drilling."

Members of the Energy, Environment, and Agriculture Task Force have the opportunity on Thursday for an "Off-Site Coal and Gas-Fired Power Plant Tour for State Legislators," where legislators will tour the Kansas City Power & Light Hawthorne Generation Facility.

On Friday, they'll participate in a task force luncheon on net metering, which incentivizes solar by crediting consumers who feed energy back into the grid -- incentives that ALEC wants to kill.

Other bills and presentations include:

ALEC has been struggling recently to rebrand itself as a "legislator-driven organization," but all available evidence suggests this is merely cosmetic.

ALEC announced a policy last year that only legislators -- and not lobbyists -- can introduce model bills or resolutions for board adoption as "model" ALEC policy (after corporate lobbyists and special interest groups vote as equals on the bills with legislators on ALEC task forces), but documents obtained by the Center for Media and Democracy after nearly a year of litigation show that lobbyists merely tap politicians to introduce bills on their behalf.

At last year's task force summit, for example, a lobbying group not only handed ALEC legislators a pre-written model resolution, its representative wrote an entire script for the politicians to recite as they did so. The Wisconsin State Journal noted that the documents show the "lobbying group pulling legislators' strings."

The FDA proposed regulations on “Electronic Cigarettes” contains one true statement, page 19, “ e-cigs have surpassed in popularity nicotine replacement products that have been available for quite some time”. Nicotine gum, lozenges, prescription drugs, inhalers, etc. are sold by Pfizer and Glaxo. Business is down and they do not like it. Thus the “war on ecigs” waged by Pharma through the politicians and media sources that they control. Regulate and tax e-cigs out of existence and at the same time conduct a campaign of fear and misinformation aimed at those who still trust government, dissuading smokers from trying e-cigs. Keep smoking or use the pharma products, that have a low rate of success. A Freedom of Information request filed with the European Union provides correspondence between Sophie Crousse, the VP of European Affairs with Glaxo, and Dominik Schnichels, who is in charge of E-cig regulations for the EU. Put “SANCO correspondence with Industry lobbyists over TPD” into google and read them for yourself. Bearing in mind that e-cigs are competition for Glaxo and that in July, 2012, Glaxo plead guilty to criminal and civil charges from the U.S. Justice Dept and paid a 3 Billion dollar fine for illegally targeting children and adolescents, through their doctors to become users of dangerous anti-depressants, the relationship between Ms. Crousse and Mr. Schnichels seems quite strange. Ms. Crousse’s services were not necessary in the U.S., because in March 2013, Mitch Zeller was appointed Director of FDA Center For Tobacco Products. From 2002 until 2013 Mr. Zeller was an Executive at PinneyAssoc., who had the exclusive contact with GLAXO to provide consulting services on issues related to tobacco dependence. Thus begins a full scale attack on e-cigs and a fear campaign aimed at hopelessly addicted smokers dissuading them from trying a product that might save them from the “death sentence” of addiction to tobacco cigarettes. The “Gateway to Tobacco Addiction” comes right out of the Glaxo memos. The CDC reports that many youths are experimenting with e-cigs which was widely and constantly reported in the media. On 12/18/ 2013, Susan Liss, the exec. dir. of the Campaign For Tobacco Free Kids, was pleased to announce ,”2013 was the 3rd year in a row for significant declines in teen smoking”. One may conclude that the e-cig is the “Gateway” out of smoking. This received no coverage, it did not fit the agenda. There are two brave people in government not afraid to take on “big Pharma’ Terrence Young proclaims,’it is time to hold Big Pharma to account for it’s unscrupulous and corrupt marketing practices”. Rona Ambrose introduced a bill which includes stiff fines , 5 million a day and jail time for Pharma executives who break the law”. Unfortunately they are not in the USA. Mr. Young is a member of parliament in Canada and Ms. Ambrose is the Canada Health Minister. In the USA, the FDA protects the Pharma companies and regulates the American people. FDA RECOMMENDED 'ANTI-SMOKING PILLS” CHANTIX and ZYBAN MOTLEY FOOL INVESTMENT LETTER March 28, 2014  Chantix has seen sales top $700 million in the past, but the drug is now mired in controversy over potential suicides and cardiovascular risks. In fact, Pfizer had to dole out $273 million last year because of lawsuits stemming from suicides and other psychiatric problems. Smokers die after taking Zyban cure by RACHEL ELLIS, Mail on Sunday Eighteen smokers have died after taking Zyban - the new 'wonder cure' for nicotine addiction, The Mail on Sunday reveals today. The deaths, reported by GPs to the Department of Health, have occurred in the seven-and-a-half months since the drug was launched. Those who died were mainly in their 40s and 50s - although one was aged just 21. Health Department figures also show that 3,457 Zyban users have suffered a disturbing range of suspected side effects - from chest pains to fits, seizures and depression.