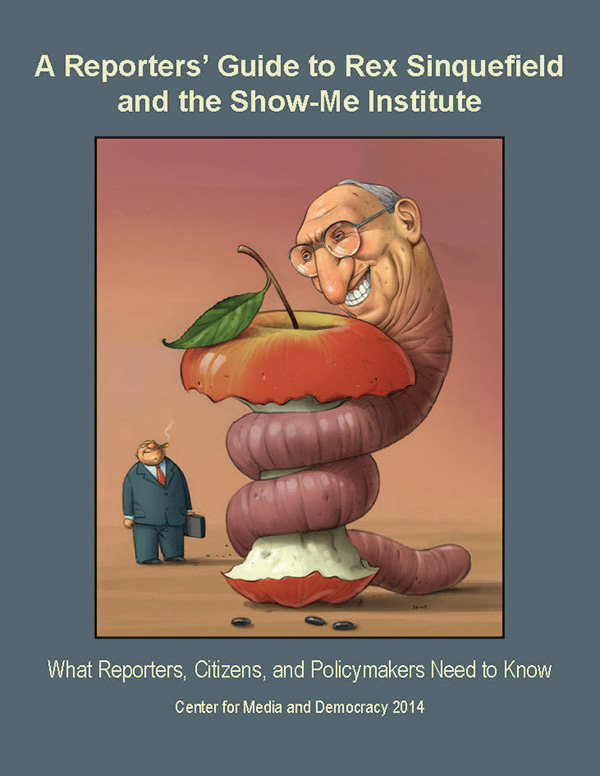 The Center for Media and Democracy and Progress Missouri today released a new report, "Reporters' Guide to Rex Sinquefield and the Show-Me Institute," that should be an eye-opener for Missouri residents and national press.

While a great deal of attention has been paid to the billionaire Koch Brothers and their network of dark money groups and right-wing think tanks, few have heard of Missouri multi-millionaire Rex Sinquefield.

"Sinquefield is one of the top right-wing political funders in the country, and the single top political spender in Missouri, where he has spent at least $31.5 million since 2006 seeking to reshape Missouri laws, legislators, and policies according to his own ideological mold," said co-author Brendan Fischer, General Counsel of the Center for Media and Democracy. "Plus, like the Kochs, he pursues his agenda through a diversity of avenues, including his pet think tank the Show-Me Institute and front groups and lobbying entities, in order to massage politicians, spin the press, and try to soften up public opinion toward his personal wish list for changing Missouri law."

Sinquefield has poured tens of millions into the show-me state to push for the repeal of the progressive income tax system, to thwart efforts to secure fair wages for hardworking Missourians, and to promote legislation that weakens Missouri’s public schools.

"Despite the obscene sums of money Sinquefield spends on politicians, consultants and TV ads, Missourians continue to reject his ideas and vision," said Sean Nicholson, Executive Director of Progress Missouri. "Whether it's bizarre ideas about the KKK and public schools, or radical tax schemes, people not on Rex's payroll are having none of it."

Key findings from the report include:

ALEC is holding its Spring Task Force Summit at the Kansas City Marriott this week, May 1-2.