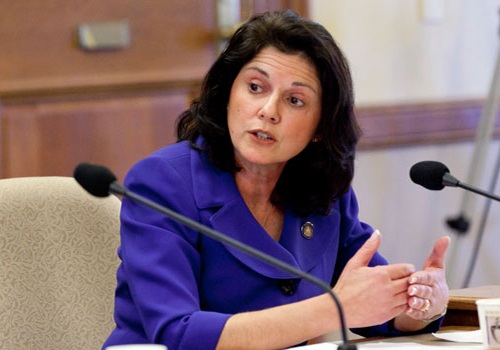 New documents released as a result of the Center for Media and Democracy's open records lawsuit against American Legislative Exchange Council (ALEC) vice-chair Senator Leah Vukmir provide more evidence that lobbyists and special interest groups are calling the shots within ALEC, undermining that group's latest PR spin that it is a "legislator-driven" organization.

The previously-undisclosed records from ALEC's Spring 2013 meeting show a Florida-based State Policy Network lobbying group instructing Senator Vukmir and other legislators to introduce a "model" resolution for legislators to thwart Medicaid expansion in their state, and even writing an entire "script" for legislators to parrot in the ALEC task force meeting -- contradicting ALEC's claims to reporters last year that only legislators propose model policy, and demonstrating that such claims are merely a talking point.

CMD long suspected Vukmir had records pertaining to the Medicaid resolution, and her initial failure to disclose them helped prompt CMD's lawsuit. It also motivated CMD to continue pursuing the case even after Senator Vukmir tried to claim immunity from any suit to enforce the open records law.

Throughout last year Senator Vukmir repeatedly claimed in statements to the press that she had "produced all records subject to [the] open records request" that gave rise to CMD's case. However, as part of the settlement (where Vukmir agreed to pay $2,500 in damages), she not only released records pertaining to the Medicaid resolution, but also more than 100 pages of other documents that had been withheld.

At ALEC's Spring Task Force Summit a year ago, Vukmir and other board members voted to approve a policy that only legislators -- and not lobbyists -- can introduce model bills or resolutions, part of ALEC's effort to re-brand itself as a "legislator-driven organization."

But at the same meeting, Vukmir and other legislators agreed to introduce a model resolution under the direction of a lobbying group.

In advance of the Task Force Summit, Christie Herrera, vice-president of policy at the Florida-based SPN affiliate Foundation for Government Accountability, asked Vukmir to sponsor a resolution opposing Medicaid expansion. She sent Vukmir a draft of the resolution, but acknowledged "it may be tweaked a bit, based on SPN member suggestions."

Herrera then wrote to Vukmir and other legislators thanking them for sponsoring the resolution, and providing specific instructions about what to say.

“Each of you will need to introduce the bill,” Herrera wrote. “As such I have written opening remarks that are also attached to this e-mail."

The remarks were more than mere talking points. Herrera wrote an entire script for legislators to parrot. She wrote that "ALEC had a (ridiculous) concern that the task force debate would be 'one-sided,' so I have focused each of your remarks on addressing at least one pro-expansion talking point" -- yet all the remarks ultimately urged the corporate lobbyists and legislators in attendance to adopt the resolution.

Herrera told Oklahoma Senator Kim David to say, "I have spoken to many constituents about whether our state should expand Medicaid." She told Arizona Senator Nancy Barto to claim that in her state, "we've already experimented with Medicaid expansion, to disastrous results." Herrera told Missouri Representative Sue Allen to repeat the line, "My cosponsors and I hope that this resolution can serve as a template for other lawmakers who choose to oppose Medicaid expansion with a formal resolution."

Vukmir did not plan to attend the task force meeting where the resolution was considered, but other records show her sending a text message asking how it went. Herrera responded: “Passed unanimously. Great job Madame Sponsor!”

Even the Wisconsin State Journal said that the docs show the "lobbying group pulling legislators strings."

Other records describe task force leaders reporting to the ALEC board about the introduction and passage of ALEC model legislation in state legislatures -- despite ALEC's recent claims that it doesn't track its model bills as they are adopted in states across the country.

ALEC told Bloomberg News in 2012 that they don't track the introduction and adoption of ALEC model bills. Last year, when Brookings Institute fellow Molly Jackman was researching ALEC, its staff told her ALEC doesn't track its legislation. ALEC and its staff took to twitter in late 2013 to repeat the claim, publicly, that "we don't track our model policies."

As CMD's Nick Surgey wrote in January, ALEC's public denials about its obvious bill tracking activities may signal an IRS investigation into the group. Bill tracking adds to the evidence that ALEC is engaged in lobbying, which ALEC is supposed to keep to a minimum to preserve its 501(c)(3) charitable status; ALEC has repeatedly told the IRS that it engages in zero lobbying. CMD, Common Cause, Voters Legislative Transparency Project, and Clergy Voice have filed complaints with the IRS challenging ALEC's charitable status for, among other things, engaging in excessive lobbying.

Herrera, the Foundation for Government Accountability vice-president of policy who gave Vukmir the anti-Medicaid expansion resolution, previously worked as director of ALEC's Health and Human Services task force, where she urged the introduction of ALEC legislation in states like Wisconsin and acknowledged lobbying in states across the country to support legislation to repeal or block the Affordable Care Act.

Accusations Are Not "Unfounded" if True

Senator Vukmir's release of the records last week was the culmination of an 11 month legal battle. CMD filed suit against Vukmir in May of 2013 after suspecting that she had not released all records pertaining to ALEC's Spring meeting. CMD’s Research Director, Nick Surgey, had sought Vukmir’s text messages related to ALEC’s spring meeting. In response, the state Senator divulged one set of text messages with Herrera discussing the sponsorship of the resolution -- yet claimed she had no emails or other records pertaining to the meeting. Because of that exchange and because Vukmir is on the National Board of ALEC and attended the meeting, CMD was convinced that she had withheld records responsive to our request.

Senator Vukmir publicly insisted that she had no records in her possession, and then tried to throw up every possible roadblock to CMD's lawsuit: her staff berated and chased a process server who tried serving her with court documents, and then, with the backing of Attorney General J.B. Van Hollen's office, she made an unprecedented claim that she was entirely immune from lawsuit, based on a novel reading of the Wisconsin Constitution. If her legal theory were upheld, it would undermine the public records law, because legislators could never be held accountable for their failure to comply with their open records responsibilities.

After extensive briefing on the subject of the state constitution's legislative privilege, hundreds of hours of legal work, and significant media attention, it turns out that CMD was right: Senator Vukmir had failed to disclose over a hundred pages of public records.

Despite the settlement and award of damages to CMD for Vukmir's failure to disclose the documents earlier, ALEC spokesman Bill Meierling told the press the suit was a “yearlong witch hunt based on unfounded accusations.”

However, as the evidence demonstrates, ALEC’s spin again rings false. Accusations aren't "unfounded" if they turn out to be true, and filing a lawsuit to enforce and defend state open government laws is hardly a "witch hunt."

the investigation you do on the various liberal/progressive groups that control the Democratic Party, and let us not forget the role that unions play in controlling and directing the legislation pushed by the Democratic Party
https://www.facebook.com/brendankeefe11alive