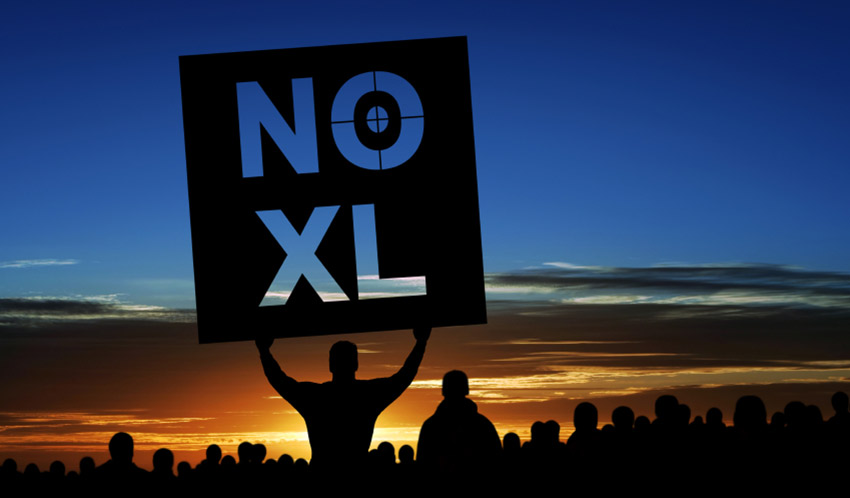 Millions of U.S. citizens have voiced their opposition to the Keystone XL (KXL) pipeline in recent months, with more than 2 million public comments opposing the project hand delivered to the State Department last week. At the same time, hundreds of state legislators have been lining up in favor of KXL, seemingly just as passionate and as heartfelt as those opposed to the project. But many legislators have been tasked with promoting the project by oil industry lobbyists who provide them with model bills, talking points and draft op-eds.

According to documents obtained by the Center for Media and Democracy (CMD), the American Petroleum Institute (API) and other oil industry groups have been directing state legislators to make public and legislative statements in favor of the pipeline project, and have provided legislators with draft legislation, language for op-eds and testimony to be presented as their own. Central to these efforts is the American Legislative Exchange Council (ALEC), through which lobbyists -- such as those from API -- can meet in secret with state legislators from across the country.

During the most recent annual ALEC meeting in August 2013, held in downtown Chicago, oil-industry lobbyist Michael Whatley provided legislators at the group's International Relations Task Force meeting with a briefing on the KXL pipeline, urging legislators for their help in getting the project approved. Whatley -- a lobbyist for the Consumer Energy Alliance (CEA) -- has regularly attended ALEC meetings in recent years, and has presented to the organization on KXL in the past. CEA receives funding from the two leading U.S. oil lobby groups -- the American Petroleum Institute (API) and the American Fuel and Petrochemical Manufacturers (AFPM) -- and lists among its members leading oil companies, including ExxonMobil, Shell and BP amongst many others. Whatley's lobbying firm HBW Resources also has a somewhat unexplained relationship with the Alberta Government -- see Salon.

According to the internal minutes from the ALEC meeting provided to CMD, Whatley called on legislators to help push the pipeline project to approval. Much as environmental groups view KXL as being a line in the sand, as symbolic of how serious the Obama administration is about tackling climate change, the oil industry considers the project to be a possible harbinger of things to come. "We're very concerned about the precedential impact of this refusal," Whatley told the group.

Whatley and CEA have briefed ALEC legislators on Keystone before. When speaking at the group's conference in Arizona in December 2011, Whatley gave a presentation to the International Relations task force, titled "Keystone XL -- A Critical Project for America."

In recent months, state legislators seem to have heeded the industry's marching orders.

On February 13, 2014, 75 state legislators from Michigan, led by ALEC member Aric Nessbit, wrote to the State Department calling for the pipeline to be approved. Then on March 4, 2014, a letter was sent from 29 State Senators in Nebraska, led by Senator Jim Smith, who has been a vocal and controversial figure in the fight for Keystone XL in his state. Smith was one of nine state legislators to attend a 2012 ALEC Academy trip to Alberta to view the tar sands -- a trip organized by CEA through ALEC and funded by TransCanada.

Letters supporting Keystone were also sent from state elected officials from the Kentucky Senate, Ohio Senate, Ohio House of Representatives, Texas Assembly and the Wisconsin Assembly as well as letters from Governors in Wisconsin, Mississippi, Montana and Maine.

So far, in the 2014 session, legislative resolutions supporting the pipeline have been introduced in Kansas, Missouri and Florida. That's in addition to resolutions introduced in Indiana, Kansas, Kentucky, Louisiana, Michigan, Minnesota, Mississippi, Missouri, Ohio and South Dakota during 2013.

ALEC has encouraged its members to introduce its own "model" legislation supporting KXL, titled the "Resolution in Support of the Keystone XL Pipeline." Since that language was written in 2011, ALEC told its members by email in 2012: "If you would like to introduce a similar resolution in your state legislature, we have suggestions to update it given all that has happened." The bills that have appeared since then have varied in language somewhat, with the updated version alluded to in the ALEC email not yet made public. Many of the pro-KXL bills introduced in 2013 and 2014 closely follow a set of TransCanada's own talking points, as CMD has previously reported.

Since many of these states do not allow for much disclosure through state public record laws, it is difficult to fully document the influence of oil industry lobbyists. However, what can be documented is extremely revealing of their role.

CMD previously reported on the pro-KXL resolutions in the 2013 session in a series of articles, including reporting about Rep. John Adams from Ohio who, after attending an ALEC/TransCanada trip to Alberta, was asked by ALEC to send "thank you notes" to the lobbyists who paid for the trip and took him for dinner. As CMD documented, not long afterward, Rep. Adams introduced a pro-KXL resolution provided to him by a TransCanada lobbyist.

In Florida, freshman representative Walter Bryan ''Mike'' Hill sponsored a pro-Keystone resolution, HM 281 in December 2013. Laying the ground for his bill, in December Hill published an opinion piece in the Pensacola News Journal in Florida, his local newspaper.

According to emails obtained by CMD under the Florida Public Records law, the language for Hill's opinion piece came directly from API lobbyist David Mica, who sent Hill's staff member, Ryan Gorham, a draft version on November 26th. "I have ideas for distribution... please give me a holler," wrote Mica attaching the draft.

An hour later, Gorham emailed the draft opinion piece to Hill. According to the exchange, the only change made by Hill and his staff was to spot a missing preposition in one sentence -- the word "to" had been left out. The piece was published under Hill's name on December 27, 2013. Staff from API and related projects funded by the organization such as "Energy Tomorrow" celebrated the piece on social media. A very proud -- but oh so modest -- David Mica tweeted: "@MikeHillfl nails his op-ed viewpoint! Way to go Representative Hill."

This industry-legislator-opinion strategy was explicitly expressed in August 2013 by CEA's Whatley at the ALEC conference in Chicago. According to ALEC's own meeting minutes, obtained by CMD, Whatley called on ALEC legislators to publish op-eds in support of the project. "Put an op-ed in any paper in your district talking about the positive values of Keystone XL," Whatley said. ALEC has also directly asked its members to publicly speak out in support of Keystone. In a 2012 email to members, Karla Jones, Director of International and Federal Relations, wrote: "Senator Pam Roach has been quoted in the media about Keystone, and I would like to encourage and provide information to any of you that would like to do the same."

In July 2013, Jim Snyder, who was writing for Bloomberg, reported on a dozen Republican federal and state lawmakers repeating the same talking points from CEA in letters they sent to the State Department during its previous review of the Keystone XL project in 2013:

"In doing so, they (the lawmakers) often pointed to the same facts and the used the same language. 'Keystone XL will be critical to improving American energy security and boosting our economy,' Representative Steve Stivers of Ohio wrote. So did Representative Jackie Walorski of Indiana. And Steve Daines of Montana. And John Carter of Texas. And Phil Gingrey of Georgia.

The wording similarities aren't coincidental. The letters are all based on correspondence written by the Consumer Energy Alliance, a Washington-based coalition of energy producers and users, including Exxon Mobil Corp. (XOM) in Irving, Texas, and Dow Chemical Co. (DOW) in Midland, Michigan."

Those talking points appeared again during a hearing for the pro-KXL resolution in Kansas HCR 5014. The bill sponsor, Rep. Hedke's testimony to the Kansas State Senate Utilities Committee on February 13, 2014, parroted the same CEA language, writing: "Keystone XL will be critical to improving American energy security and boosting our economy." CMD asked Hedke for a comment on the source of his testimony, but as of publication the representative had not responded.

When not working as a legislator, Hedke runs a company called Hedke-Saenger Geoscience, which according to the representative's most recent financial disclosures feature a long list of oil industry clients including Hess Oil Company, Prospect Oil, Landmark Resources, and Trans Pacific Oil Corp.

Hedke told CMD by email that he was given the initial language for his resolution by a lobbyist from the Kansas API affiliate, before he "passed it out for reviews with numerous individuals, including a lobbyist representing TransCanada."

At the hearing, Ken Peterson, Executive Director of the Kansas Petroleum Council (the API affiliate) stated as part of his testimony that "(t)his resolution is part of a nationwide effort to show Washington that states support the pipeline." Truer words have never been spoken. API and the organizations that it funds including CEA have been working tirelessly behind the scenes to create the impression of a groundswell of passionate support for KXL.

The Center for Media and Democracy recently released a short film and website exposing the lies behind the Keystone XL project. Watch it for free at www.PipeLIESExposed.org

These people can talk all they want, we're not all ignorant! The most jobs that will be created are people cleaning up all the spills! How many have they already had in Canada? Too darn many to run across our great country to pollute. And their lying about the stability it will bring our economy as once it's suitable to be used it will all go over seas! If Canada wants to ship this do it across their country, we won't let it cross ours! And shut down their time bomb trains that are crossing our country blowing up and ruining our eco-system and killing people. These cars aren't made to carry this nasty crude and everyone knows it. Their hoping the trains will scare us enough to let them build their fricking pipeline! Their both a no win option and we won't allow either one. I don't care how much money is backing them, theres over 10,000 people ready to go to jail to stop this disaster from crossing our country!