The Dark Money Is on a Contested Convention and Paul Ryan 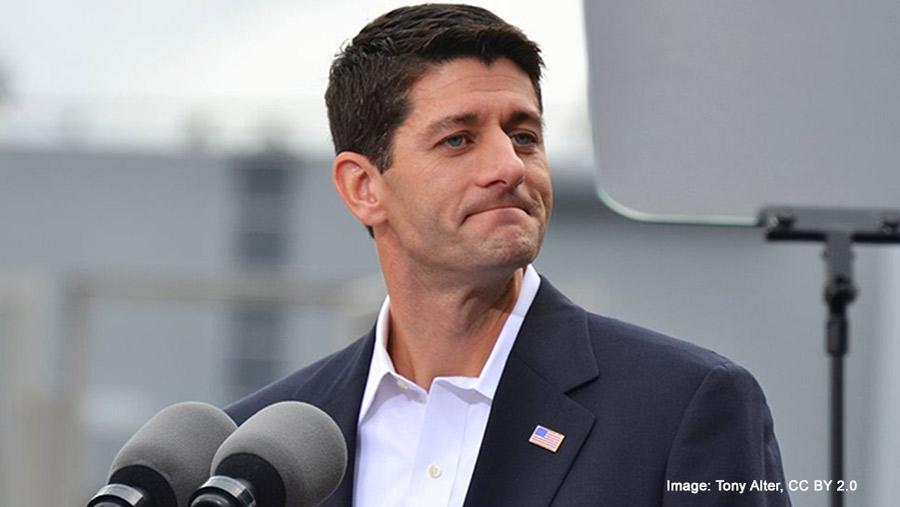 Madison – With Donald Trump on the news every day declaring that the "rules are rigged" and speculation rampant that the GOP may see a contested convention, the Wisconsin GOP can be forgiven for getting all starry-eyed about the possibility that native son Speaker Paul Ryan might throw his hat into the ring.

After all Ryan is working on his own "parallel platform," says the New York Times; he is fundraising with major GOP donors, he is releasing videos that look a heck of a lot like campaign ads and he just jetted to Israel to kiss the ring of Benjamin Netenyahu, a ritual only candidates undertake.

But Ryan dashed the hopes of many when he held a press conference at the RNC yesterday to declare:

"Let me be clear: I do not want, nor will I accept the Republican nomination."

This would have been more convincing had Speaker Ryan not told us that he would "never" become House Speaker a short time ago.

Ryan will Chair the GOP Convention in Cleveland in July. What else could he say? "Yes, the rules are rigged and they are in my hands, mwahahahaha?"

It is his job to talk about rules, right up until the moment they change, and if he decides to throw his hat into the ring to save the GOP from Donald Trump, he will have powerful players at his side including Wisconsinite and RNC Chair Reince Priebus; dark money man Eric O'Keefe, who was key to Donald Trump's loss in Wisconsin; head of delegation Wisconsin Governor Scott Walker; and even the Koch Brothers, who have long supported Ryan's career.

And these folks don't always play by the rules.

Nostalgic for the smoke-filled back rooms of yesteryear, Wisconsin's dark money don Eric O'Keefe was given almost a full page in the Wall Street Journal's opinion section over the weekend to call upon GOP convention delegates to seize the nominating process to stop Trump and ensure that the right kind of candidate is chosen. The paper's opinion page, of course, is run by Green Bay native Paul Gigot.

O'Keefe "sees a contested convention as a once-in-a-lifetime opportunity for the delegates of a private political party to assert their power," writes the paper.

And when asked if allowing delegates to decide means a return "to the smoke-filled backroom bargaining of the past?" O'Keefe opined, "And what's wrong with that process? It worked well. Those rooms were full of engaged citizens."

O'Keefe is no stranger to back rooms. He has deep ties to the Koch brothers going back to David Koch's 1980 run for VP on the Libertarian ticket. O'Keefe and his Wisconsin Club for Growth (WCFG) dark money group were previously under investigation for secretly funneling the money of millionaires and billionaires into the Wisconsin recall campaigns. After almost 1,000,000 Wisconsin residents signed recall petitions, WCFG funneled $20 million into multiple committees with names like "Citizens for a Strong America" to give the impression that Walker had broad support from the community. Combined groups and committees fighting the recall outspent pro-recall forces $59 million to $22 million. O'Keefe's bank of lawyers succeeded in getting a compromised Wisconsin Supreme Court (elected to office with $10 million in expenditures by the parties under investigation) to shut down the investigation, but the case is likely to be appealed to the U.S. Supreme Court.

O'Keefe did not say who his perfect candidate was for the GOP convention in Cleveland, but given his history, Paul Ryan and Scott Walker would be on a very short list.

The Kochs seem to be leaning in that direction as well. An unnamed source "close to" the Koch brothers told the Huffington Post that Charles Koch believes Ryan is a "shoo-in" for the nomination at a brokered GOP convention. Koch Industries has long been one of Representative Ryan's top contributors, and now is one of Speaker Ryan's biggest boosters. This quarter, the Koch's are helping to fuel his staggering $17 million war chest, reports Politico. Charles Koch, CEO of Koch Industries, and his wife gave his "Team Ryan" fundraising vehicle $488,400 in March alone; Koch Industries gave $71,000.

In the run-up to Wisconsin's April 5 primary, the state's GOP machine worked in lockstep to throw their support behind Ted Cruz in a last ditch effort to block Trump.

First, Scott Walker suggested that with an open GOP convention, "it's very likely [the nominee] would be someone who's not currently running."

Then right-wing radio hosts lead by WTMJ's Charlie Sykes savaged Trump on the air. In Sykes' view, it is Ryan who represents Wisconsin's "sort of inclusive, aspirational style of conservatism" that could win support.

Then Walker made a last minute, tepid endorsement of Cruz on Sykes' show, saying Cruz was "the best positioned by far" to beat Trump.

Then national Club for Growth spent a whopping $1 million on TV ads instructing the GOP faithful to skip John Kasich and support Ted Cruz as the only way to stop Trump.

Watching all this U.S. Rep. Scott Krug, a bemused Kasich supporter, explained: "I think this is a three-corner bank shot." Krug told the right-wing outlet Breitbart, "I don't think there's that much of a lovefest for Ted Cruz, but they're just using him to keep Trump below 1,237 delegates so they can broker the convention for Paul Ryan."

In the end, Trump won the majority of Wisconsin counties, 44 out of 72, but lost the key counties where the right-wing radio hosts had the best opportunity to pound home the Club for Growth message.

If the anti-Trump wing of the GOP coalesces around Ryan, it won't be because the Ayn Rand fan represents a moderate, "inclusive" conservatism when it comes to policy. Ryan just puts a smiling face on the same extremist policies the Kochs and their allies have been pushing all along.

For years, Ryan has been in charge of producing the GOP budget, and he has trotted out budgets so extreme and damaging, nuns had to take to the road to educate the public about how harmful they would be. They made a stop in Ryan's home town some years ago and were part of the reason Ryan lost his hometown of Janesville in the 2012 election, his county, and even his precinct.

Economist Dean Baker has read every one of the Ryan budgets and writes that Ryan is willing to cut government to an astonishing degree: "In addition to wanting to privatize both Social Security and Medicare, Ryan has indicated that he essentially wants to shut down the federal government in the sense of taking away all of the money for the non-military portion of the budget."

While Ryan tends to avoid controversial statements when it comes to issues like immigration and reproductive health, his stated positions are hardly less extreme than Cruz's or Trump's. Ryan's "immigration reform" policy would spend hundreds of millions more on border security and would increase deportation of child refugees.

As Trump works to make sure his delegates make it into the convention, he should be aware that they will be up against a very sophisticated crew that does not always play by the rules.

Jessica Mason contributed to this article.