The Nuns on the Bus Go Up and Down | PR Watch

The Nuns on the Bus Go Up and Down 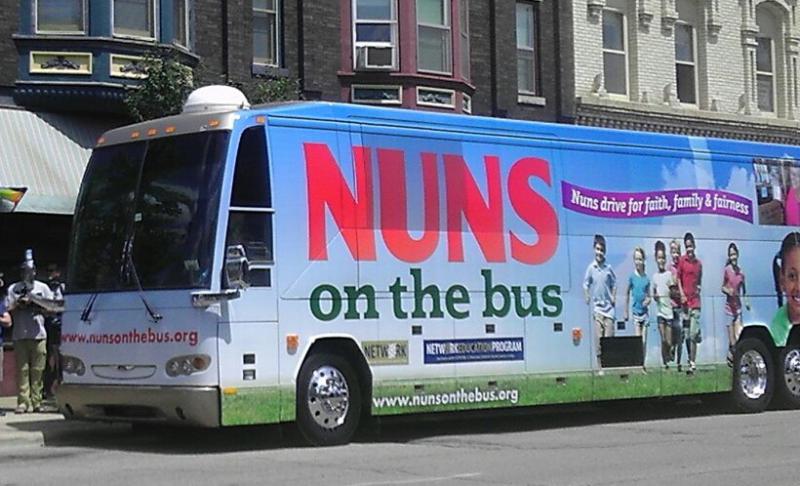 Four nuns from two coasts and the American heartland embarking on the ultimate tongue-in-cheek counterspin tour, walked off their presidential campaign-style "wrapped bus," past 300 cheering fans into the offices of the nation's rising star conservative Catholic lawmaker, Rep. Paul Ryan (R-Janesville). They were there to challenge the House Budget Committee Chairman's fundamentals -- both the social services-slashing budget that he has shepherded through Congress and his claims that Catholic doctrine supports his policies.

Nuns for Faith, Family and Fairness

Romney and the nuns were visiting Ryan's home town on consecutive days to bring national attention to the agenda of one of the GOP's favorite sons. But while speakers at the Romney rally lauded Ryan and suggested he might make a great vice president for the Romney candidacy, the nuns were there to take him to task in their own gentle fashion, calling the GOP budget he masterminded "irresponsible."

With her on the bus were Sister Mary Wendeln, an immigration relief worker from Cincinnati; Sister Marge Clark, a social programs specialist with Network; and Sister Diane Donoghue, the founder of a Los Angeles area housing and health organization. In all, 14 nuns from around the country will join the tour under the slogan "Nuns drive for faith, family and fairness."

In comments to reporters, Campbell singled out excessive military spending and food stamp cuts among the serious problems in the Ryan budget, which has stalled in the Democratic Senate. "Just on foodstamps alone, Congressman Ryan is wrong that the church can take care of this issue. The cuts that have been proposed and passed by the [U.S.] House are going to require every church, every synagogue, every mosque, every house of worship in the United States, each year for ten years, to each raise $50,000. It's impossible."

Campbell distributed a document that called for Catholics to be "values voters" and to "address our fiscal challenges without shredding social safety nets that help those most in need;" to defend health care reform; and speak up "for those without a voice and hold[ing] candidates and elected officials accountable to the common good."

Campbell said the nuns were well-received by Ryan's office and that the staff "took copious notes." Based on the conversation with aides, she said, the nuns anticipate receiving a response to their faith budget directly from Ryan.

Asked what she might say if she had the chance to directly change the heart of a member of Congress, Campbell said, in a pointed comment to Ryan, "Responsibility only works when there is solidarity in the community.... Individual responsibility combined with solidarity makes a whole. That's what we argue."

What would Jesus Cut? 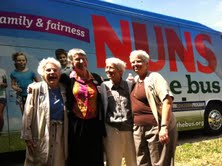 In the Iowa launch of "Nuns on the Bus" on June 17, Campbell said that one central goal of the tour was to point out the absurdity of the claims by Ryan and others who justify harmful cuts by claiming that the cuts are in the interests of the poor and in conformity with Catholic teachings. In April, Ryan told the National Catholic Register that, "Catholic social teaching is indispensable for officeholders." He added that "more and more of society's most vulnerable remain mired in public-assistance programs whose outdated structures often act as a trap that hinders upward mobility." In turn, by supporting poverty programs, Americans enter a "vicious cycle" of support for the poor that "fuels our national debt."

How about the value of feeding the poor during the most devastating economic downturn since the Great Depression? According to the New York Times, Ryan's budget would cut $3.3 trillion from low-income programs over 10 years and "leave millions of struggling families desperate for food, shelter and health care." In all, more than 60 percent of the cuts would come from low-income programs.

"The part that really got us going was Ryan saying his Catholic faith informed his budget," Campbell told an Iowa newspaper's editorial board. "My astute political analysis was 'liar, liar pants on fire.'"

When Ryan brought his message to Georgetown University some months ago, dozens of professors at the Jesuit university signed a statement criticizing Ryan on "misuse of Catholic teaching to defend a budget plan that decimates food programs for struggling families, radically weakens protections for the elderly and sick, and gives more tax breaks to the wealthiest few." The writers stated that, "Your budget appears to reflect the values of your favorite philosopher, Ayn Rand, rather than the Gospel of Jesus Christ. Her call to selfishness and her antagonism toward religion are antithetical to the Gospel values of compassion and love."

As with everything, the bus tour itself was met with controversy. Counter-protesting nuns arrived to show their support for Ryan. Sisters Joselda Kuhle and Rosalia Bauer told this reporter that Ryan correctly focused on a Catholic prolife agenda with limits on government programs for the poor. Sister Bauer defended what she called Ryan's "subsidiarity"-based theology, helping people at the most local level -- including sometimes dissuading poor families in Illinois from crossing to Wisconsin -- rather than government "printing green paper." Echoing a recent Vatican attack on American nuns, including the touring "Network" leadership, Sister Kuhle said that the visiting nuns lacked the "cloistered" status of other nuns, suggesting that they were more social activists than theologians.

After an hour and a half visit to Janesville, the "Nuns on the Bus" bus cruised on to Milwaukee for a visit to St. Benedict the Moor's meal program and to a picket line by mostly immigrant workers at Palermo's frozen pizza plant. During the next two weeks, the sisters will visit seven more states, including Illinois, Indiana, Michigan, Ohio, Pennsylvania, Virginia, and Maryland before a scheduled finish in Washington D.C. on July 2.

Back on Janesville's Main Street Tuesday afternoon, the crowd had evaporated, leaving a single peace sign between a Manpower office and a shuttered "Rock County Mortgage." There were no manufacturing jobs at Manpower (GM's last auto plant closed in 2009), just a poster seeking four telemarketers at $8.50 an hour. With so many Janesville families without work and grateful for what little government assistance there is in hard times, it is no surprise that the nuns received a warm welcome.

Congratulations to the crusading Roman Catholic Sisters (Nuns on the bus)who are taking the Gospel message of the Beatitudes into the heartland of the US now dominated by self proclaimed and misguided theologians like Rep. Paul Ryan. And shame on the fawning nuns who protest the crusading nuns as more social actvists than theolgians. One wonders who is paying the carfare for the two anti-crusading nuns? Cardinal Dolan of New York? The US Conference of (numbskull) Bishops? Archconservative and former American archbishop now the Vatican's chief pitbull Cardinal Lovada in Rome? Centuries ago I could smell the fires burning at the feet of these brave women (where are the eviscerated and cowardly male clergy?) as the powerhungry bishops and clergy of those days ignited the flames. Perhaps today's Vatican and USA RC bishops are keeping the matches in their pockets waiting for an opportune time to ignite the tyrannical flames once more against those who would dare proclaim the Gospel.
Paul Ryan and his ilk are too young or to removed to remember the Freedom Riders in the 60s? Remember the voter registration drives, the sit-ins, the teach-ins, and all the work and danger involved. But these nuns are not. Nor are the well-fed bishops and the rich and comfy Catholics they pander to. But the nuns on the bus remember - and they are the ones following Christ and His teachings. Ryan et al had better listen, or, as wiser heads have suggested, they just might be caught in "the fire next time," because it is surely coming.
Nuns have traditionally taken care of the poor, the downtrodden... He defended the cause of the poor and needy, and so all went well. Is that not what it means to know me?" declares the LORD. Jeremiah 22:16
If all Catholic clergy were like these nuns, I would probably still be going to church. More power to you.urs
What could be more despicable than an acolyte of a sociopathetic, amphetimine addicted and hypocritical "goddess of the marketplace" hiding behind the Gospel of Jesus Christ? Ryan came of age during a time in Janesville that was known for prosperity and excess. Instead of preaching moderation and restraint for all, he has become the apologist for austerity for most, and unrestrained wealth and power for his sponsors.
[http://www.catholics-united.org/content/press-release-catholics-united-condemns-disgusting-violent-comments-against-nuns-bus Click here for Catholics United Press Release About Vicious Iowa Radio Host Comments About "Nuns on the Bus."]
I thank the Lord for these nuns on the bus! You go Sisters!!
I was so impressed with these women who inform with honesty and reveal the dishonesty and flaws of Ryan's budget proposals. Can a bus be filled with these nuns so more information can be distributed by them to the voters??This was such an endearing group of ladies. Thank you so much! Go for it Sisters!