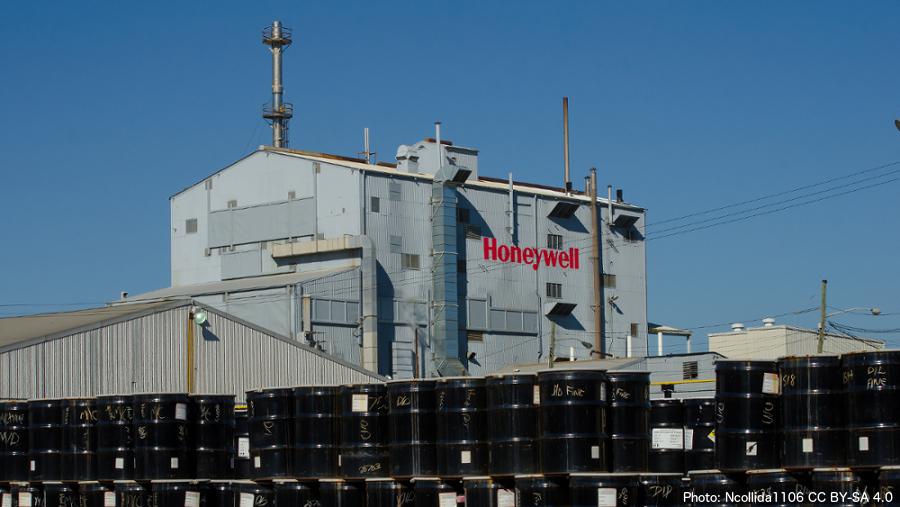 Six Honeywell workers were cleaning a 100,000-gallon sulfuric acid tank when it became over-pressurized and violently ruptured in January 2015. Other workers sheltered in place as fire crews rushed to Honeywell International, Inc.'s Hopewell, Virginia plant, one of the world's largest single-site producers of caprolactum, the primary feedstock in the production of nylon polymer used in carpet fibers, plastics, and films.

Luckily, no one was hospitalized. But the incident was just one in a string of problems at the troubled Hopewell plant, which has been cited by OSHA for 7 "Serious" violations in three separate inspections from 2013-2015. The same plant was also the source of environmental violations that cost Honeywell $3.3 million in federal and state penalties in the same period.

Pervasive violations of worker safety and health standards at giant Fortune 500 firms like Honeywell underscore the need to hold federal contractors accountable for the hazards to which their workers are exposed.

President Obama has taken executive action to implement tough new reporting rules for federal contractors. The Fair Pay and Safe Workplaces Executive Order requires federal contractors to report violations of safety, health and labor laws occurring over the past three years to the government when they apply for new contracts.

Unfortunately, many American firms—fronted by their powerful trade associations—are working behind the scenes to scuttle these reporting requirements that would make it easier for the government to hold them to account.

Honeywell International Inc., a Fortune 500 company and one of the 2015's top 100 federal contractors, sells a wide range of products from common thermostats for home or office to sophisticated unmanned aerial vehicles for the Department of Defense.

With a helping hand from U.S. taxpayers, the company does very well, and its CEO David Cote is paid a handsome salary. According to its 2014 SEC 10-K filing, Honeywell reported revenues totaling $40.3 billion in 2014, and Cote's compensation package was worth some $29 million that year, including more than $300,000 in personal use of the company's aircraft.

When it comes to worker safety, however, Honeywell is falling down on the job. The company and its subsidiaries have incurred 20 "Serious," 1 "Willful," and 11 "Other-than-Serious" OSHA violations and $72,885 in penalties between 2013-2016, the time period actionable under the Executive Order. The company is contesting some of these citations.

These serious problems haven't slowed down the flood of federal contracts and taxpayer dollars. In 2014, Honeywell generated $3.69 billion in revenue from the federal government, primarily from the Department of Defense and NASA. (See 2015 10-K filing here, p. 2) This does not include the National Nuclear Security Administration's award to Honeywell last July of the $900 million contract to run the National Security Campus in Kansas City, Missouri.

But Honeywell doesn't want to be held accountable for its past safety violations. Along with other serial OSHA offenders, the firm is fighting back, utilizing two obscure trade associations and another business lobbying group seeking to block President Obama's new rules.

Under the rules now being developed, the Executive Order will help contracting agencies identify companies with lalbor law violations violations and work with them to come into compliance before those companies receive any future contracts.

This doesn't sit well with Honeywell and other pervasive OSHA violators like DuPont.

Represented by trade organizations with obscure names like the Human Resources Policy Association (HRPA) and Professional Services Council (PSC), federal contractors have been fighting the new rules in Congressional testimony, media statements, and lobbying efforts led by well-connected operatives like Stan Soloway, who was named one of the 100 most influential business leaders in Washington, before recently stepping down as CEO of PSC.

Honeywell executives sit on the board of both HRPA and PSC, alongside other multi-million dollar federal contractors. In addition, Honeywell CEO and Chair David Cote serves as Vice Chair of the powerful Business Roundtable, which has also pushed back against President Obama's Executive Order.

"There is no evidence of a widespread problem of pervasive, repeated or willful violations of labor laws by federal contractors," Soloway testified to the House Committee on Education and the Workforce. The trade associations are spinning the rules as "a de facto blacklisting of well-intentioned, ethical businesses."

But Soloway didn't do his homework. Many of PSC's member companies, whose executives sit on its board, have been repeatedly cited for "Serious" OSHA violations, including Honeywell and its subsidiaries.

Then in February, 2015, less than a week after the rupture, an OSHA investigation resulted in another "Serious" citation, this time for violating statutes related to reporting workplace incidents. Yet another inspection in March 2015 found three more "Serious" violations, two of which again related to process safety management.

Complaints about Honeywell's Chesterfield plant, just up the James River from Hopewell, prompted three OSHA inspections from 2013-2015, resulting in one "Serious" and seven "Other-than-Serious" violations and $6,712 in penalties. The "Serious" violation related to "lockout/tagout" requirements for disabling power to equipment while employees perform service or maintenance. The violations, some of which remain open, also included failure to perform proper exposure monitoring for employees where methylene chloride is present. OSHA considers the chemical to be a potential occupational carcinogen.

The Golden Valley plant continues to give rise to worker health and safety problems, notwithstanding that the Executive Order put federal contractors on notice to clean up their acts. Last October, in response to a complaint, OSHA conducted yet another inspection at Golden Valley, and issued 1 "Willful" violation and $25,000 in penalties for failing to ensure that workers' fingers were properly guarded from dangerous welding machinery [29 CFR 1910.255(b)(4)]. The case remains open.

All in all, Honeywell and its subsidiaries have incurred 20 "Serious," 1 "Willful," and 11 "Other-than-Serious" violations from 2013-2016, for a total of $72,885 in penalties, which would be reportable under the Executive Order.

Some Honeywell facilities seem to have recurrent problems with chemical and gas leaks that threaten workers and the environment.

In October 2014, residents of Metropolis, Illinois watched a cloud of gas emanate from Honeywell Metropolis Works for five minutes before mitigation spray towers were turned on. An equipment failure had caused a leak of uranium hexafluoride, a toxic and radioactive compound used to enrich uranium. The United States Nuclear Regulatory Commission (NRC) later issued a notice of violation against Honeywell for failure to declare an Alert and to properly notify the NRC. Less than a year later, the NRC issued another notice of violation against Honeywell Metropolis following an additional uranium hexafluoride leak in August, 2015.

While violations of nuclear regulations are not reportable under the E.O., these leaks came on the heels of an OSHA inspection of the same plant that resulted in 12 "Serious" and 1 "Other-than-Serious" violations after an unexpected release of hydrogen fluoride vapor in December, 2010. The OSHA case, which closed in 2013 and would be reportable under the E.O., resulted in penalties of $70,000 along with citations for violating safety rules related to processing highly hazardous chemicals, testing equipment, correcting deficient equipment, and reporting on incidents involving the release of hazardous chemicals.

The Metropolis plant, a uranium conversion facility, has long raised concerns about possible radiation exposure and ongoing environmental problems. Honeywell International Inc. pleaded guilty in March 2011 to a felony offense of "knowingly storing hazardous waste without a permit," and was given a criminal fine of $11.8 million. In January, 2014 the Illinois Attorney General ordered Honeywell to pay a civil penalty of $90,000 following three dangerous releases of hydrogen fluoride.

Metropolis Works was not alone in being cited for environmental violations. The Hopewell, Virginia plant repeatedly leaked nitric acid, methyl ethyl ketone, caprolactam, oil and gasoline from 2013 to 2015, according to officials with the Virginia Department of Environmental Quality, including one alleged spill that caused a major fish kill in a tributary of the James River. Honeywell agreed to pay $300,000 in penalties and to make $13 million in upgrades to the plant, though it did not admit any wrongdoing.

Again, while these particularly egregious environmental violations at the Metropolis and Hopewell plants would not be reportable under the E.O., they are included to demonstrate that companies that run afoul of workplace health and safety regulations also often have problems with other regulations that protect the public.

Federal agencies handing out billions of dollars in contracts each year should know what kinds of jobs those contracts are buying—and so should the American people, who are footing the bill. Firms like Honeywell should be required to clean up their acts before reaping billions in annual revenues from federal contracts.

Firms and trade associations might like to spin the new rules as a blacklisting of "well-intentioned" and "ethical" businesses, but nobody should have to rely on good intentions or good luck to survive a day on the job.

This series on fair pay and safe workplaces is dedicated to the memory of watchdog journalist Chris Thompson of CorpWatch, who wrote the 2014 report "Subsidizing Contractor Misconduct." If you want to encourage the White House Office of Management and Budget to take swift action to protect workers, please sign CMD’s petition here.