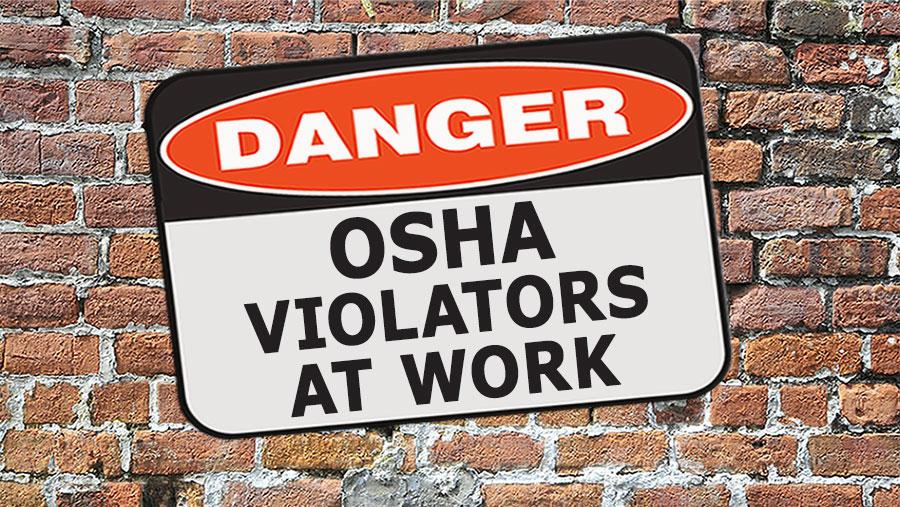 Every day, American workers are killed and injured on the job. From explosions, electrocutions, and toxic fumes to more common falls or crushing injuries, lives are altered and families irreparably torn apart.

For too long, many corporations have taken a cavalier attitude to worker safety, but when these corporations are federal contractors paid by U.S. taxpayers, the public demands a special level of accountability.

That is why President Obama issued the Fair Pay and Safe Workplaces Executive Order (EO) in 2014. The order requires federal contractors to report their safety record to the federal government as a condition for receiving federal contracts. It is a good first step toward holding repeat, serious violators to account and protects more than 26 million workers or 1 in 5 in the workforce.

But some of these federal contractors are pulling out the stops, urging the Obama administration to withdraw new rules providing worker protections and using little-known trade organizations to do the dirty work for them.

Companies Use Little-Known Trade Associations to Lobby Against Accountability

Federal contractors are pushing back hard on the EO, with two trade associations leading the charge: the Professional Services Council (PSC) and the HR Policy Association (HRPA).

The PSC, with 370 member companies, calls itself "the leading advocate and resource for the federal professional and technical services industry." The HRPA represents more than 360 corporations in the U.S., many of them federal contractors, and describes itself as "the lead public policy organization of chief human resource officers."

Both associations have taken strong stands in the media, congressional testimony, and lobbying asserting that the EO is unnecessary because, according to the PSC, there is "no evidence of a widespread problem of pervasive, repeated or willful violations of labor laws by federal contractors." In HRPA's words, "The Order simply seeks to solve a problem that does not exist."

The PSC concedes that there are "instances" where contractors have violated labor laws, and some of these "may well have been intentional." But "the laws involved are so complex and challenging to execute that many companies, sometimes at the direction of the government itself, take actions that result in honest mistakes." These "honest, administrative errors," the PSC asserts, "make up the vast bulk of ‘violations.'" And existing accountability mechanisms are more than sufficient to deal with cases where there has been "nefarious intent."

Yet a closer look at the companies whose senior executives sit on PSC's and HRPA's Boards of Directors undermines these assertions. By CMD's count, at least ten firms (or their subsidiaries) whose officials sit on these boards have histories of labor law violations which would be reportable under the EO, including numerous violations that occurred even after the order was signed in July 2014.

Key examples of violations which would be reportable under the EO include:

DuPont (HR Policy Association Board): 4 workers died after a gas leak on November 15, 2014 at its LaPorte, Texas plant. OSHA cited DuPont for 1 "Repeat" and 9 "Serious" violations and issued a fine of $99,000. A follow-up inspection in January 2015 found that DuPont continued to violate safety rules, and OSHA fined the company an additional $273,000, and found 4 "Serious," 3 "Willful," and 1 "Repeat" violations. The LaPorte violations are under contest by the company. Just months before the LaPorte accident, a chemical leak from a tanker truck exposed workers to hazardous chemicals at DuPont subsidiary DuPont Chamber Works' Deepwater, New Jersey plant. OSHA cited the company for 11 violations, including 8 "Serious" and 2 "Repeat" violations and initial penalties of $120,300. The violations are under contest by the company.

Fortune 500 Firms Should Have No Trouble with Compliance

It would be difficult to attribute these companies' (or their subsidiaries') histories of violations–as the PSC would have it–to difficulties complying with ‘complex' and ‘challenging to execute' labor laws: 8 of these firms are ranked on the 2015 list of "Fortune 500" companies; 7 are among 2015's top 100 federal contractors. As the White House's fact sheet on the EO makes clear, the "vast majority of federal contractors play by the rules"; however, a small and salient number do not, and their violations cannot be credibly excused as "honest, administrative errors."

Yet, despite their histories of labor law violations, these companies or their subsidiaries remain eligible for contracts under the broken federal procurement system that the new rules aim to fix.

If PSC and HRPA want to learn more about the labor rights violations of companies doing business with the federal government, they need look no further than the member companies and their subsidiaries whose officials sit on their own Boards of Directors.

Instead of complaining about "executive overreach" and "blacklisting" of "well-intentioned companies," they should be encouraging their law-breaking board members' companies or subsidiaries to clean up their act.

You can learn more about this issue at CMD's Sourcewatch.org website. See new entries for Fair Pay and Safe Work Places Executive Order, the HR Policy Association and the Professional Services Council. Look for further reporting on this topic next week and follow the hashtag #safeworkplaces.

This series on fair pay and safe workplaces is dedicated to the memory of watchdog journalist Chris Thompson of CorpWatch, who wrote the 2014 report "Subsidizing Contractor Misconduct. "If you want to encourage the White House Office of Management and Budget to take swift action to protect workers, please sign CMD’s petition here.