Walker's Wisconsin, a "Laboratory for Oligarchs" 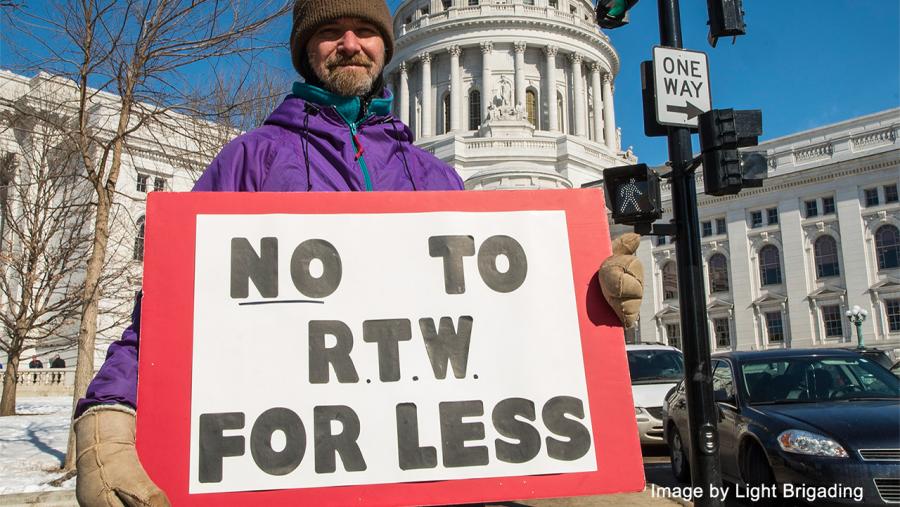 Scott Walker's attacks on unions and family-supporting jobs in Wisconsin helped elevate his national profile and ingratiated him with deep-pocketed political donors like the Kochs. Can he take this agenda nationwide?

This weekend's New York Times Magazine has a cover story by Wisconsin native Dan Kaufman called "Scott Walker and the Fate of the Union" that digs deep into Walker's anti-worker crusade. The piece touches on the struggle over Act 10, which lowered wages and took away the bargaining rights of 320,000 public-sector workers in 2011, and follows the story of ironworker Randy Bryce, who came to the Wisconsin capitol in 2015 to protest the "right to work" bill that would have a similar impact on 180,000 private-sector workers. Study after study has documented that misnamed "right to work" laws are associated with significantly lower wages for workers and undermine their skills and safety training. Walker promises more of the same in Wisconsin as the repeal of prevailing wage is being considered in the state legislature.

The New York Times report cites work by the Center for Media and Democracy (publishers of PRwatch.org) which shows that the Wisconsin bill was virtually a word for word copy of the American Legislative Exchange Council model as are other bills being introduced across the United States.

"Many union leaders worry that if Walker is elected president, Congress could pass a national right-to-work bill," Kaufman writes. "In this sense, passing Act 10 was a kind of audition for Walker."

“If we can do it in Wisconsin, we can do it anywhere — even in our nation’s capital,” [Walker] wrote in his 2013 book, “Unintimidated.” The origins of Wisconsin’s right-to-work bill, meanwhile, showed whom he might have been trying to impress.

As revealed by the Center for Media and Democracy, a watchdog organization based in Madison, Wisconsin’s law was a virtual copy of a 1995 model bill promoted by the American Legislative Exchange Council, an organization based in Arlington, Va., that disseminates model legislation for a consortium of corporations and conservative private backers, including the Koch brothers.

A law with language that closely tracks that model bill was enacted in Michigan in 2012. Similarly worded proposals were introduced this year in Kentucky, Maine, New Hampshire, New Mexico and West Virginia, but they failed to advance. Missouri’s right-to-work bill, which was also more or less identical to the model bill, passed both houses this year, only to be vetoed by Gov. Jay Nixon, a Democrat, early this month.

A few weeks after signing the right-to-work bill, Walker gave a private talk in New York to a group of powerful Republican donors that included David Koch. Koch later told reporters that he believes that Walker will be the eventual Republican presidential nominee. “I thought he had a great message,” Koch said after the meeting to a reporter for The New York Observer. “Scott Walker is a tremendous candidate.”

CMD has been highlighting the influence of the Koch-backed American Legislative Exchange Council since launching ALECexposed.org in July 2011, after a whistleblower brought CMD over 800 of ALEC's previously-secret model bills. These cookie cutter bills are once again spreading across the country along with efforts to ban local governments from raising the wage and implementing paid sick days.

Check out the similarities between the ALEC Right to Work Act and the right-to-work bills introduced this year:

The impact of Walker's ALEC-inspired agenda has been less than rosy.

"If Wisconsin is a model for what Walker might achieve nationally, it is worth examining his results so far," Kaufman writes.

Walker credits Act 10 in part for the decline in Wisconsin’s unemployment rate since he took office in 2011 and has said he considers right-to-work “one more arrow in that quiver” for the creation of jobs. But since 2011, the state has fallen to 40th out of the 50 states in job growth and 42nd in wage growth, according to an analysis of Bureau of Labor Statistics data conducted by The Capital Times of Wisconsin.

Act 10, officially called the Wisconsin Budget Repair Bill, was supposed to fix persistent budget shortfalls by lowering labor costs and eliminating union rules. But Wisconsin’s two-year projected budget deficit has actually increased; in May, the Legislature approved a $250 million cut to the state’s prized university system to help close the gap. Wisconsin is now among the top 10 states people move out of.

“Wisconsin has become a kind of laboratory for oligarchs to implement their political and economic agenda,” electrician's union Local 2304 president Dave Poklinkoski told Kaufman. “We’re small enough that they can carry it out. Can they carry it out on the national level? We’ll find out.”

Walker's trail of broken promises includes his 2010 pledge to create 250,000 jobs. He failed to reach that mark by 57 percent. Although Walker now boasts about right to work as he campaigns for the Republican presidential nomination, he told Wisconsin voters during the 2012 and 2014 elections that the bill wouldn't get to his desk. One Walker supporter says the Governor looked him in the eye and pledged not to bring the bill to a vote.

Terry McGowan, the president of Local 139, a statewide union of 9,000 heavy-­machinery operators, endorsed Walker [in 2010], because he had promised to increase highway funding and build more roads. McGowan supported him again last year, but since then, he has come to reconsider . . .

“I sort of trusted the guy,” he said, recalling his 2010 endorsement of Walker. “I took some bullets at the time from the other unions.” When Walker’s “divide and conquer” video was released in 2012, The Milwaukee Journal Sentinel asked McGowan about the governor’s remarks. McGowan told the paper that the phrase “divide and conquer” troubled him. “It means turning worker against worker,” he said.

Last fall, McGowan met with Walker, who was seeking a contribution and another endorsement for governor, at a small campaign office in Wauwatosa, outside Milwaukee. “I looked across the table at him, and I said, ‘We are both God-­fearing men,’ ” McGowan told me. “ ‘If you can tell me that right-to-work will not come on your desk, then I will take you for your word.’"