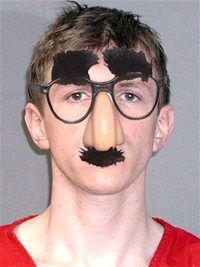 At the Center for Media and Democracy (CMD), there is an awful lot of good fortune coming our way.

First, a mysterious Middle East millionaire wanted to give us a boatload of money to produce a documentary on fracking and global warming. Our administrative staff politely dodged the calls as senior staff warned environmentalists across the country that some sort of scam was afoot.

Then our Lisa Graves was showered with compliments on our investigations into undisclosed election spending, as a team repeatedly tried to get her on film at a recent Netroots Nation conference. When she asked them for their contact information, they claimed to have no email or Twitter accounts (at Netroots? Really?). The duo followed her to a private party, and one stalked her down a hotel hallway at 2:00 in the morning, prompting another writer to intervene.

Now another deep-pocketed mystery funder wants to bankroll us to help with a film about the impact of dark money on the African American community -- a great idea, frankly, as the Koch-fueled attack on health care is resulting in governors, like our own Scott Walker, rejecting federal funds for expanded health care coverage. Walker's move to deny health care to 87,000 people means worse outcomes for the poor, and the loss of $200 million in cost savings, says the state's fiscal bureau.

But alas, we fear that the film idea is yet another scam designed for another phony "gotcha" moment.

This latest clunky attempt has all the hallmarks of James O'Keefe.

It was O'Keefe who was behind the fantasy Middle Eastern millionaire. "Gaslands" producer Josh Fox was also badgered by the phony "Beacon International" group until he agreed to meet with them. Fortunately, he was dubious enough that he kept his own recording of the meeting, a protection CMD also uses when state law allows, and was able to pull it out when O'Keefe "unveiled" his heavily edited hatchet job claiming that Fox had agreed to work with the funder. Read the blow by blow here.

If you don't know Mr. O'Keefe, he first hit Fox News wearing pimp garb and peddling a distorted video targeting ACORN, a nationwide association of community groups that had a long track record of effectively registering low income Americans to vote. That effort was followed up by more video lies about USDA official Shirley Sherrod, plus hatchet jobs on NPR and Planned Parenthood. And how can we forget O'Keefe's effort to "probe" U.S. Senator Mary Landrieu's office? A spectacular move that got him arrested by the FBI. (See a list of his stunts here.)

O'Keefe is known to get some portion of his funding from the Koch-funded DonorsTrust and Donors Capitol Fund. The twin donor-advised funds were specifically designed to allow politically motivated right-wing individuals and corporations to remain hidden when "funding sensitive or controversial issues." In 2012, O'Keefe's outfit Project Veritas received $105,000 from Donors Capitol and $124,450 from DonorsTrust.

Now apparently O’Keefe or one of his ilk has CMD in his sights. We take it as a compliment. Our hard-hitting ALEC Exposed investigation keeps producing important new stories (such as these showing that ALEC’s campaign against renewable energy is being bankrolled by the fossil fuel industry and big utilities). Our detailed reporting on Scott Walker’s lousy job creating jobs in the state, his ongoing dark money criminal probe and Koch-funded judges trying to stop it hasn’t made us many friends on the right, which may be why we were recently graced with a visit from a woman named LaToya.

LaToya approached us about her passionate interest in making a film on dark money. We get lots of calls from grassroots groups and documentary filmmakers here, so I agreed to a meeting even though her website africanamericansforchange.org, with seals from the NAACP and Obama's Organizing for America, looked dubious. Later, we noticed her card had the NAACP's Washington, D.C. address listed as her address, and her Twitter account had been set up the day after we agreed to a meeting on August 14. Miraculously, over 1,262 Twitter followers quickly appeared, despite only 13 tweets.

When I met with LaToya, it quickly became clear she knew very little about the topic. I had to define dark money for her, and she did not know which politicians, elections, or issue ads she wanted to cover other than prisons -- perhaps. She had nephews in prison, she said, and she shared a picture of her great, great, great? grandfather who had killed to escape slavery, she said. I handed her our recent studies and talked to her about the role the Koch-funded group Americans for Prosperity has played in Wisconsin politics and the role of the DeVos group American Federation of Children in pushing "school choice" (we like to call it "school privatization") initiatives in the state, but she took no notes.

She did seem willing, however, to send me money via Charles Schwab or Fidelity, and in fact prompted me to write the names down, making me think there might be a camera in addition to a recording device in the room. The effort appears to be geared toward portraying us as hypocrites because CMD spends a great deal of time researching and writing about the role of undisclosed "dark money" in various political races, including in last week's Democratic primary for Milwaukee sheriff, but once accepted a donation from an unknown donor to support our reporting. Since then, the right has attempted to muddy the waters between the multimillion dollar secret expenditures distorting our elections system and anonymous donations to nonprofits not engaged in any electoral activity.

I told LaToya that we have helped many documentary film crews with their projects, but this is the first time one has ever offered us a dime. "We think you should be reimbursed for your work," she explained. To get her out the door, I told her to get me a proposal and references in writing.

Later, I sent her a note:

"Dear LaToya, Thanks for expressing an interest in our investigations, but I am afraid I can't recommend your project to the team here. Our-data driven reporting is very labor intensive and does not seem to be a good match for the type of film you are pursuing. Also, we would not participate in a documentary project on the role of undisclosed dark money in elections without knowing who is producing the film and funding it.

"Good luck with your idea about how undisclosed election spending may be impacting the African American community. I am sure you can find a more appropriate organization to work with."

I should have added a P.S. See James O'Keefe III.

CMD contacted the NAACP in Washington, who told us they did not know the mysterious film maker, and she did not work out of their office. CMD attempted to reach LaToya for comment on this story.

UPDATE: CMD later unmasked the bunglers in a story you can find here. And figured out who bankrolled the hit here.

Our mid-late 20th century and forward history tells us that when minorities - particularly, Black people - are involved in operations like these, the operations are, at least, being aided by agencies higher up the "dirty works" food chain than just some clown like O'Keefe and/or any of his allies --- even the monied ones; Koch Bros. types might be bankrolling stuff like this but the green light comes from a different place. Look closely and it seems there's an active battle going on where one side, most certainly, has drawn a line in the sand and ANYTHING or ANYONE not on its side is an enemy to be actively attacked. It appears there is a flagrant disregard for federal, state, and local municipality laws, whether it be police openly and wantonly killing, maiming, or harassing citizens or politicians making open threats to people with whom they disagree. The goal seems to be aggravated division of world view and socio-cultural ideology. And this side has much of the media ready at the wait for their next, what and how to spin, command. The goal? Ensure by whatever means necessary, that they hold political sway numbers-wise, between 2016 and 2018 in order to attempt to wrangle into the highest office a person who, without prompting, will advocate for their every wish -------- and be damned with the rest of us.