Right-Wing Megadonors Are Financing Media Operations to Promote Their Ideologies 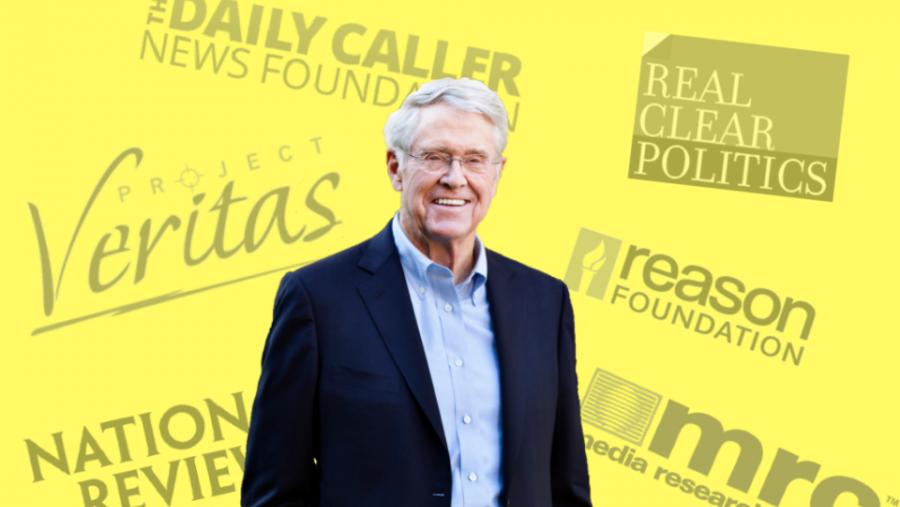 For decades, Charles Koch has been committed to radically changing American society into a libertarian paradise, free from taxes and regulations, in which the wealthiest oligarchs, like himself, can destroy the environment, exploit their workers, and reap astonishing profits.

His "Structure of Social Change," first introduced by his top strategist, Richard Fink in the late 1970s, was a plan to weaponize philanthropy by using three areas of influence that would, together, gradually push far-right economic ideas into the American mainstream. The strategy begins with the funding of free-market university programs, something the Charles Koch Foundation has done at hundreds of higher education institutions including George Mason University, Florida State, and Western Michigan University, to produce the "intellectual raw materials" for libertarian policies. Then, Koch and his wealthy allies fund think tanks and policy shops that would convert the academic literature into usable policy proposals, which, in the third stage, Koch-funded advocacy groups promote to government officials and the greater populace.

Koch's strategy has been a wild success, but it may not have been as effective without another avenue of influence: favorable media.

A CMD investigation has found that the family foundations of Charles Koch and a number of similarly-minded right-wing megadonors, along with two donor-advised fund sponsors that they use to shepherd their charitable contributions and receive special tax breaks, have donated at over $109 million to media operations since 2015, nearly all of them conservative.

DonorsTrust and Donors Capital Fund (DCF), the connected donor-advised fund sponsors, have sent more than $45.7 million of their clients' money to finance media nonprofits, including the Media Research Center, Real Clear Foundation, and the National Review Institute, since 2015.

Longtime right-wing funders such as the Lynde and Harry Bradley Foundation, the Sarah Scaife Foundation, the Charles Koch Foundation, and the Charles Koch Institute have showered many of the same media groups with millions of dollars over the same period. The recipients range from the nonprofit behind The New Criterion, a magazine that runs lengthy think pieces from conservative intellectuals, to the libertarian Reason Foundation, to James O’Keefe's far-right smear operation, Project Veritas.

The host of conservative media outlets have faithfully met the needs of their often billionaire funders. The Daily Caller, heavily funded by the Charles Koch Foundation, prints opinion pieces from senior fellows at the climate change-denying Heartland Institute claiming the idea that human-caused climate change is destroying the earth is a "delusion." The Media Research Center's CNS News site prints essays by right-wing personality Ben Shapiro attacking critics of free-market capitalism. Reason.com promotes the wonders of capitalism and makes podcasts extolling the legacy of the late David Koch, a longtime Reason Foundation trustee. Project Veritas attempts to smear the presidential campaign of economic populist Bernie Sanders and earns praise from President Donald Trump. The Motion Picture Institute produces films that attack regulation and a children's video series in which an economics professor who is affiliated with several Koch-funded programs teaches kids about the value of free-market economics. And PragerU publishes five-minute videos attacking socialism, climate science, socialized medicine, and the left in general.

The 21 conservative donor nonprofits researched by CMD for this report are:

The donors investigated by CMD provided more than half of the contribution revenue over the researched time period for several conservative news operations, including the Lucy Burns Institute and the American Media Institute.

Here are some of the biggest recipients of grants from these funders.

The Lucy Burns Institute, a Madison, Wisconsin-based nonprofit and member of the right-wing State Policy Network, received the most money from these nonprofit donors out of all media recipients. From 2015-18, the Institute took in nearly $13.4 million, mostly from DonorsTrust and DCF but also from the Coors Foundation, Bradley Foundation, the Sarah Scaife Foundation, and the Searle Freedom Trust. The Institute's 2018 tax return is not yet publicly available, but grants from these six donors amounted to 76 percent of the Institute's contribution revenue from 2015-17.

The Lucy Burns Institute Board of Directors has members who are fixtures in the Koch-backed conservative political movement. Director Tim Dunn, the founder and CEO of an oil and gas company in Texas, is chairman of the Empower Texans Foundation, a group funded by DonorsTrust that has worked with Koch's Americans for Prosperity, and vice chairman of the Koch-funded Texas Public Policy Foundation. Board member Jack McHugh is senior legislative analyst at the Koch-backed Mackinac Center for Public Policy.

Director Todd Graves is an attorney who represented the Wisconsin Club for Growth, a Koch network nonprofit whose leadership includes board member O'Keefe, the founder of the media group now known as the Franklin News Foundation, in Wisconsin's John Doe investigations. Plaintiffs in the case accused then-Gov. Scott Walker of illegally coordinating with the Wisconsin Club for Growth. Conservative nonprofits researched by CMD gave over $1.1 million to the Franklin News Foundation, which publishes conservative news wire and website The Center Square, from 2015-18.

Brent Bozell's Media Research Center was also a major recipient of right-wing foundations' cash from 2015-18, scoring nearly $11.2 million from nine nonprofits tracked by CMD. The family foundation of Breitbart financier Robert Mercer gave $7 million to the Center from 2015-17, and DonorsTrust ($1.3 million) and the Sarah Scaife Foundation ($1.3 million) have given large amounts since 2015. The nine donors provided 27 percent of the Media Research Center's contribution revenue from 2015-17.

The Media Research Center, which operates conservative sites such as CNSNews.com and Newsbusters and bills itself as a media watchdog, is a huge favorite of right-wing politicians and media personalities. In its 2018 annual report, the Center boasts of accolades from the likes of Vice President Mike Pence, Trump fanatic and Fox News host Sean Hannity, and Judicial Watch President Tom Fitton.

The Center's work is "a fundamental element of my show prep daily; they always have been and they always will be," said talk show host Rush Limbaugh.

Libertarian think tank the Reason Foundation received close to $9.6 million from eight nonprofits researched by CMD, including $3.8 million from the Searle Freedom Trust and nearly $1.7 million from the two Charles Koch nonprofits, from 2015-18. The late David Koch was a Reason trustee.

Right-wing propaganda organization Project Veritas, the group that took down ACORN and smeared Planned Parenthood, receives nearly one-third of its contribution revenue from DonorsTrust. From 2015-18, DonorsTrust funneled over $7.8 million to Project Veritas, accounting for 31.3 percent of its contribution revenue. The Bradley Impact Fund added $31,000 during that time period.

James O'Keefe and his Project Veritas attempt "stings" on Democratic politicians, liberal nonprofits, and media companies, most of which fail to prove anything close to the malfeasance O'Keefe hopes to expose. Perhaps most notably, the group tried to lure Washington Post reporters into writing about a woman who pretended to have had an underage affair with Alabama Senate candidate and right-wing extremist Roy Moore, but the reporters were able to sniff her out.

The American Media Institute bills itself as an independent investigative news service, but from 2015-16, Donors Trust, Donors Capital Fund, the John William Pope Foundation, and the Sarah Scaife Foundation gave it nearly $6.1 million, which was more than two-thirds of its total revenue. The following year, the Institute's revenue dropped significantly, from $5.5 million in 2016 to $577,000 in 2017.

According to Media Matters, the Institute has "duped" mainstream news outlets into publishing its stories, which included one critical of the Clinton Foundation that originally didn't meet the standards of its publisher, Fusion.

The Real Clear Foundation, which funds investigative reporting for the site RealClearPolitics.com, is almost entirely funded by seven conservative nonprofits researched by CMD. DonorsTrust is the biggest donor, having given $3.8 million from 2015-18, and other contributors include Donors Capital Fund ($1 million), the two Charles Koch foundations ($458,000), the Ed Uihlein Foundation ($250,000), and the Thomas W. Smith Foundation ($100,000). The Koch total includes a $375,000 consulting contract paid by the Charles Koch Institute in 2018.

The Daily Caller News Foundation (DCNF) funds much of the content of the Daily Caller website, a site that has several ties to white nationalists and was co-founded by now-Fox News host Tucker Carlson with $3 million from right-wing donor Foster Freiss. As of 2018, Carlson was secretary of the DCNF board of directors.

Charles Koch Foundation officials may express concern over the site's extremism, but the foundation is DCNF's biggest donor-by a mile. The Koch Foundation and the Charles Koch Institute combined to give over $3.3 million to the Daily Caller News Foundation from 2015-18, representing 37 percent of the group's contribution revenue during that time period. Including grants from DonorsTrust, the Sarah Scaife Foundation and others, conservative nonprofits researched by CMD provided the DCNF with 58 percent of its donation revenue.

Charles Koch alleges he is not a fan of Trump, but Daily Caller and other Koch grant recipients has often been generous to the president. In fact, Daily Caller accepted an estimated $150,000 from the 2016 Trump campaign to rent its email list. Recently, reporting revealed that Trump family friend Tom Hicks, Jr. said last year that the Daily Caller editor could be counted on to advance Trump's personal political goals regarding Ukraine.

An anti-Muslim nonprofit led by Daniel Pipes, the Middle East Media and Research Institute is another favorite of right-wing megadonors. The Institute, an organization at the "inner core" of the nation's Islamophobia network that "attempts to portray Muslims and Arabs as being inherently irrational and violent," according to the Council on American-Islamic Relations, took in $5.1 million-or 23 percent of its contribution revenue-from four conservative foundations from 2015-18: Sheldon and Miriam Adelson's family foundation ($4 million), DonorsTrust ($564,800), the Sarah Scaife Foundation ($450,000), and the Bradley Foundation ($70,000).

The Center for American Greatness, an extremist, pro-Trump group that has published alt-right-style posts online, has on staff a former Trump official and an editor who won fellowships from the Earhart and Bradley foundations. The group earned its 501(c)(3) nonprofit tax status from the IRS in July 2017. The following year, DonorsTrust gave the Center for American Greatness $538,000, with the Bradley Foundation and Thomas W. Smith Foundation adding $150,000 and $50,000, respectively.

The Bradley Foundation website details an additional $3 million that it gave to media groups such as the Center for American Greatness and Encounter for Culture and Education, the conservative publisher of Encounter Books, in the first nine months of 2019.

Council on American-Islamic Relations has a pattern of discriminating against and mistreating their own employees, especially #women. There are issues of religious discrimination, sexual harassment, retaliation, hostile work environment, union busting, financial mismanagement (including losing their 501c3 status and questions around international funding through their Washington Trust Foundation), lack of board oversight, board #incompetence, and other serious issues at CAIR. Donor funds are directly going to pay for attorneys to suppress, silence, and intimidate those who have been treated unjustly. There are many people who have been directly harmed by CAIR. The CAIR Sexism Documentation Project currently has 35 members, mostly women, who share their experiences of facing discrimination, and other abuses, by CAIR. https://www.facebook.com/groups/2228298364100050/ There were several lawsuits in 2019 by former employees/board members. Employment discrimination lawsuit filed
It's religion, what did/do you expect?