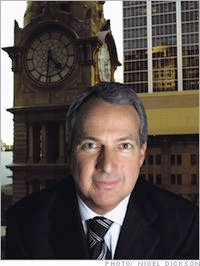 Macquarie Group Limited is a publicly traded banking, financial, advisory, investment, and fund management services headquartered in Sydney, Australia. In the United States, it has pushed for the privatization of public infrastructure and assets and operates major toll roads including Chicago's Skyway, Indiana's Toll Road, and the Dulles Greenway in Virginia, where area residents complain that higher tolls are pushing traffic into residential areas. The firm also owns a stake in Acquarion, a private, for-profit water service provider in New England, and is a major investor in K12 Inc., a for-profit provider of poorly performing "cyberschools." K12 Inc. receives 86% of its revenue from taxpayers.

"Why are we sending taxpayer revenue to executives and shareholders abroad when we need to be investing in America, rebuilding our roads, bridges and other infrastructure?" said Lisa Graves, Executive Director for the Center for Media and Democracy.

For a number of years, Macquarie funded and led ALEC's efforts to promote privatization of U.S. services. For instance, when Macquarie's Geoff Segal was the private sector chair of ALEC's Transportation and Infrastructure subcommittee in 2011, he introduced the "Establishing a Public Private Partnership (P3) Authority Act" as a "model" bill to promote the privatization of public assets. The bill calls for an unelected committee to serve as a one-stop-shop for the privatization of any public service.

Learn more about Macquarie at our SourceWatch profile. Follow the conversation at #OutsourcingAmerica.

Nicolas Moore is the highest paid road worker at more than $8 million in compensation. Think what $8 million would do for the improvement of roads and infrastructure. Seriously, we have to go out of the country to handle our toll roads?? Don't we have qualified individuals or companies that can run the toll roads? How come the DOT isn't running the operation of the toll roads and using the money for road improvements? Doesn't anyone else think this is ridiculous to be using a foreign company to run toll roads in the U.S.? I don't understand this way of thinking or lack of thinking! This ridiculous and so short sighted. ALEC is destroying our country bit by bit!
It used to be that stealing from the government was about getting friends and family into cushy government jobs with decent salaries and benefits. But that kind of money is chump change. So the privatisation movement was begun so that the people that actually get the work done could work for peanuts while $millions could be paid to CEOs and investors.