-- Hint: They aren't your local teachers, nurses and social workers 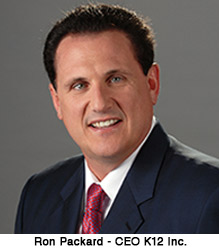 "Time and again we're told that librarians, nurses and teachers are to blame for state and local budget problems," said Lisa Graves, Executive Director of the Center for Media and Democracy. "In reality, taxpayers are being duped by corporate CEOs and Wall Street banks that are siphoning money out of our communities for huge salaries and bonus packages."

You will not see this on Fox News. Over the next few weeks, CMD will be highlighting some of the CEOs who are living large off the taxpayer dime. The effort is part of our ongoing new project, OutsourcingAmericaExposed.org, which focuses on 12 firms doing the most to privatize public services.

K12 Inc. is a publicly-traded (NYSE: LRN) for-profit, online education company headquartered in Herndon, Virginia. On its own and as a member of the American Legislative Exchange Council (ALEC), K12 Inc. has pushed a national agenda to replace bricks and mortar classrooms with computers and replace actual teachers with "virtual" ones. As K12 Inc. notes in its most recent 10-K, "most of (its) revenues depend on per pupil funding amounts and payment formulas" from government contracts for virtual public charter schools and "blended schools" (combining online with traditional instruction), among other products.

What does K12 Inc. do with all that money? According to new data, it does not educate children very well (only 27.7 percent of K12 Inc. online schools met state standards in 2010-2011, compared to 52 percent of public schools), but it does pay its CEO very well. From 2009-2013, Packard made over $19 million in compensation, and compensation to his top executives skyrocketed 96 percent in 2013. Thank you taxpayers!

Not bad for a novice "teacher" and former Goldman Sachs executive who started K12 Inc. with a $10 million investment from convicted junk-bond king Michael Milken (his boss at Knowledge Learning) and $30 million more from other Wall Street investors.

Learn more about K12 Inc. in the SourceWatch corporate profile.

The hard facts are that corporate America owns our Government. Amnesty for illegals is a prime example of big business shoving their agendas down our throats. CEO's get the attention that the constituent is supposed to have. The power lobbies and pork barrel legislation are the style by which they rob us blind. I thought that if we organized a publicly controlled election system with all campaign funds coming from tax deduction fund of say $3.00/ head and no other funds allowed, would squeeze out the big funders and allow capable people to run for any office. My thoughts were that once the people gained control of their Government's officials they could chip away at the power people. No CEO should be making more than 2 million a year. I want to go after them and the ridiculously high salary of our Congress.
Great stuff, CMD! Congrats and keep it up.
My first instinct upon reading this piece is, of course, outrage. No public educator, teacher or administrator, is paid what this man is paid. (Unfortunately, we could point to some football coaches, but that;s for another discussion.) Let me play devil's advocate however, and make this argument,the fault does not lie with K12 and it's CEO. The fault lies with taxpayers who don't prize education highly enough to be willing to pay good teachers what they are worth. Taxpayers who are willing to settle for a "bargain" when it comes to educating our nation's students. This guy and his company is hauling in millions of dollars because it's cheaper, per student, to buy these canned classes, regardless of how good or bad, than it is to train and hire teachers who are motivated and dedicated to their profession. When you have the Republican Party constantly yammering about the fact that we pay too much in taxes and pointing fingers at public servants like teachers, fire fighters, and police, and parents complaining that their kids aren't being educated, guess who will step into the breach. There will always be some entrepreneur willing and able to fill the void with what usually turns out to be an inferior product, but one that appears to solve the problem for less money, all the while lining his own pockets. Until the American public recognizes that we get what we pay for and that our public servants are valuable assets rather than public moochers as the Republicans would have us believe, guys like this will keep on taking millions out of taxpayers pockets.
Last summer I spoke with a young science education teacher recently graduated from Temple Univ. (Philly) who was just hired to teach 9th grade physical science. Her cyber charter school had 209 students assigned to her, and they get the state allotment/student as their compensation (at least $8200/year). Typically, a HS teacher would teach 5 classes/day and see about 130 students or so (many fewer in the suburbs) so they're getting an extra $650,000 over what they really deserve because they're loading her roster with about 80 extra students. Nice money for the charter if you can scam it.
is hard to believethat we are beingcontrolled bybig businessand workersless and less=/
We shouldn't be oberly concerned with the new 'hybrid' education. It seems to be failing for close to 1/3 of those exposed to it. The other 2/3 get a 'cut and paste' indoctrination patterned on what? Corporate success and right wiong extremism? A year on a more open institution or simply an exposure to life will have most of them questioning the basic dishonesty. The cost however should outrage them.
I have always maintained that for profit schools that receive government funding amount to corporate welfare. They take our tax dollars and use them to create huge profits for the stakeholders while paying lower salaries o the teachers who are responsible for educating our children. Research shows that these schools fare no better in imparting knowledge than the public schools and universities. Quite often they are below standard.