Corporate Expressways, Brought to You by Macquarie and Transurban | PR Watch

Corporate Expressways, Brought to You by Macquarie and Transurban 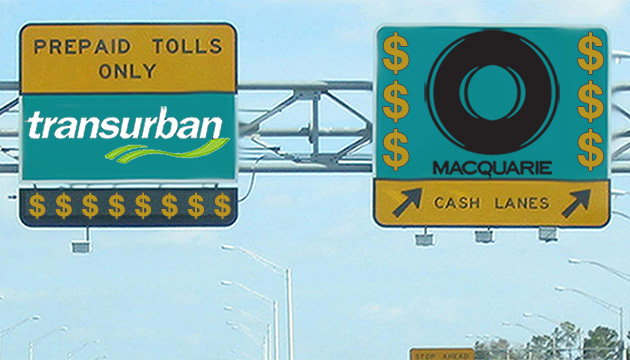 At ALEC's 40th anniversary party in Chicago this past August, the corporate lobbyists and legislators on the Commerce, Insurance, and Economic Development Task Force brushed off a statement of principles on transportation urging "a market-driven highway system" that operates "on a user-pays basis."

ALEC's vision would implement a fractured system of toll roads crisscrossing the country, with the proceeds going directly into the coffers of private corporations and their shareholders. This is a far cry from Eisenhower's vision of "mighty network of highways spread across our country" seamlessly enhancing the nation's economy, public safety and the national defense.

It is not surprising that the same corporations that benefit from road privatization were at the table spearheading this extreme outsourcing agenda.

Geoff Segal, Senior Vice President of the Australian firm Macquarie, is the private sector chair of ALEC's Transportation and Infrastructure subcommittee. At ALEC's 2011 Annual Meeting, for example, Segal introduced the "Establishing a Public Private Partnership (P3) Authority Act" as a "model" bill to promote the privatization of public assets.

The bill calls for an unelected committee to serve as a one-stop-shop for the privatization of any public service. Segal also moderated a panel at that meeting called "Tapping the Private Sector to Save Money and Improve Performance," and was featured in the 2012 edition of the "Inside ALEC" magazine urging privatization of roads, bridges and other public assets. Already, Macquarie runs Chicago's Skyway and Indiana's Toll Road; it has a stake in Acquarion a private, for-profit water service provider in New England, and continues to put skycaps out of work with its acquisition of airport baggage cart company "Smarte Carte."

Transurban, another Australian firm perhaps best known as the operator of the Capitol Beltway, has also been active in ALEC. Together with ALEC's brand of fossil fuel loving, public transportation-hating politicians, these two firms have bought up roads and other assets across the country.

But thanks to questionable, monopolistic contract provisions, the up-front payments these companies make when buying roads are unlikely to match the long-term impact on the public and a state's finances. Road privatization has consistently resulted in higher tolls, with revenue from those tolls sent to a foreign company's shareholders and executives rather than routed towards public uses. So-called "non-compete" clauses -- which effectively bar the development of competing public infrastructure or transportation (including competing roads, trains or bus routes) -- and the injection of profit into transportation planning have warped America's transportation infrastructure.

"You have to paint a great picture of your vision of the future if you want people to follow," Macquarie Board Director Michael Hawker told a group of clients last year.

"Hitler painted a great picture," Hawker said (perhaps referring to the myth that Hitler built the German autobahn), adding, "Well, maybe not from another point of view."

Macquarie and other privatizers have painted a great picture, with promises that for-profit entities will operate roads better, faster, and cheaper than public entities. But many of those promises remain unfulfilled.

For example, when a Macquarie subsidiary entered into a contract with California's transportation agency to build and run the 10-mile South Bay Expressway in San Diego, California, it was heralded as a landmark project that would prove for-profit companies could successfully play a major role in American infrastructure.

Things didn't work out that way.

The road opened in 2007, and the company quickly hiked toll fees on the expressway, pushing many commuters onto roads in residential neighborhoods.

The economic downturn further contributed to lower driving rates, and just three years later, the Macquarie subsidiary filed for bankruptcy, with 32 years left to go on its 35-year contract.

The public was left to pick up the pieces. The San Diego Association of Governments eventually managed to buy out the contract, but that came at no small cost. And thanks to the federal TIFIA financing, taxpayers across the country were left on the hook. After the bankruptcy restructuring, federal taxpayers had a 42 percent loss, and were left "with a package of debt and equity worth only 58 percent of the original investment," according to a Congressional Budget Office report.

Virginia taxpayers have been similarly dismayed by Macquarie's operation of the Dulles Greenway toll road. The company bought the 14.3 mile expressway in 2005 for $615 million, and have steadily increased toll fees. The high tolls have caused outrage among the public and pushed traffic in residential areas as drivers try to bypass the expensive tolls. Virginia congressman Frank Wolf, a Republican, has called for an investigation into the highway's toll rates, and the Loudoun County Board of Supervisors voted to oppose continued toll hikes, saying the high tolls "are placing a disproportionate and undue burden on commuters in Loudoun County" and causing gridlock on local roads from drivers avoiding the tollway.

"I would hope that we use the Greenway as sort of a case study of what not to do," said David Guernsey, a longtime member of the Northern Virginia Transportation Alliance board.

The situation in Virginia is so bad that leaders across the political spectrum have discussed taking the road back under public control. Earlier this year, Virginia delegate Joe May, a Republican, introduced a bill to buy the tollway back from the company. His bill did not pass, but the state budget calls for a study into making the tollway public again.

In order to attract private investment, Macquarie, Transurban, and other outsourcers have made rosy projections about the profitability of buying (and in some cases building) public roadways. For sixty or so years, driving rates had increased, but the trend has reversed in the last decade, and Americans are now driving less. This, coupled with a recession (and its correlative drop in people driving to work) means that road usage rates are down -- and to make up for the lost revenue, corporate roads have hiked fees significantly.

When compared with income or other forms of taxes, tolls disproportionately affect the middle and working classes, who must put a higher percentage of their total income towards the costs of driving.

Higher toll fees also alter the transportation infrastructure. "What happens on one road affects what happens on other roads," said Phineas Baxandall, a Senior Policy Analyst at U.S. PIRG. "How tolls are set incentivizes where people will go."

Publicly-operated roads set tolls based on long-term planning goals, like encouraging the use of certain roads to alleviate congestion. Private roads, in contrast, have a goal of "getting a maximum return on investment," Baxandall says, regardless of the broader impact on the public.

In many cases, companies like Macquarie and Transurban preserve their slice of the market through decades-long contracts (in some cases 60 or 70 years) and "noncompete" and "guaranteed compensation" contractual clauses.

In Indiana, as part of its contract with Macquarie, the state is prevented from building an interstate or light rail within 10 miles of the East-West Toll Road for at least 55 years, unless taxpayers are willing to pay Macquarie for the lost revenue. Additionally, the state must reimburse the company for lost revenues during construction of projects like a new exit ramp, increasing the costs of such projects significantly. Baxandall says the contract could, in theory, even apply to a public carpool arrangement: "the carpool would have to disband or pay Macquarie for the lost revenue," Baxandall says.

If you think that is hard to believe, check out Transurban's Lexus lanes.

Recent Transurban contracts with Virginia would also discourage carpools. Transurban is building new High Occupancy Toll (HOT) carpool lanes designated for cars containing three or more people, but with access offered to individual drivers willing to pay a fee (and the fees for the automated tolls varying based on traffic conditions). These lanes were initially intended to encourage carpooling, which has obvious benefits both for the environment and reducing congestion. But Transurban's contract actually does the opposite, discouraging carpools and setting up the HOT lane as little more than a "Lexus lane" for those who can afford it.

Transurban's contract with the state bars "spontaneous" carpools from using the lane, requiring instead that drivers first register and purchase a special transponder. And, if more than a sliver of the cars driving on the HOT lane are carpoolers, taxpayers have to actually pay Transurban a fine equal to 70 percent of their lost revenue.

On the I-495 Capitol Beltway, taxpayers are on the hook if more than 24 percent of the HOT lane users are carpooling. For the I-95 Expressway, extra fees kick-in if carpoolers exceed 35 percent of HOT lane traffic. This is in addition to non-compete clauses enacting barriers to the construction of "competing" transportation infrastructure.

Even some fiscal conservatives have caught on to the road privatization ruse. Among other things, the short-term windfall from selling off public assets artificially disguises structural budgetary problems.

Right-wing veteran Phyllis Schlafly, writing for Human Events in September 2006, asked, "why the rush to sell our transportation systems to foreigners?"

Schlafly continued: "'Follow the money' explains all. State and local governments pocket the money upfront and get to spend it here and now, so politicians can cover their runaway budget deficits and enjoy the political rewards of spending for new facilities. They ignore the fact that U.S. citizens must pay tolls to foreign landlords for the next two or three or even four generations."

This is the latest in a series of articles on the privatizers and profiteers selling out our democracy. To see the full corporate rap sheet on Macquarie and Transurban, visit OutsourcingAmericaExposed.org and follow the conversation on Twitter at #outsourcingamerica.

Max Abbott and Mary Bottari contributed to this article.