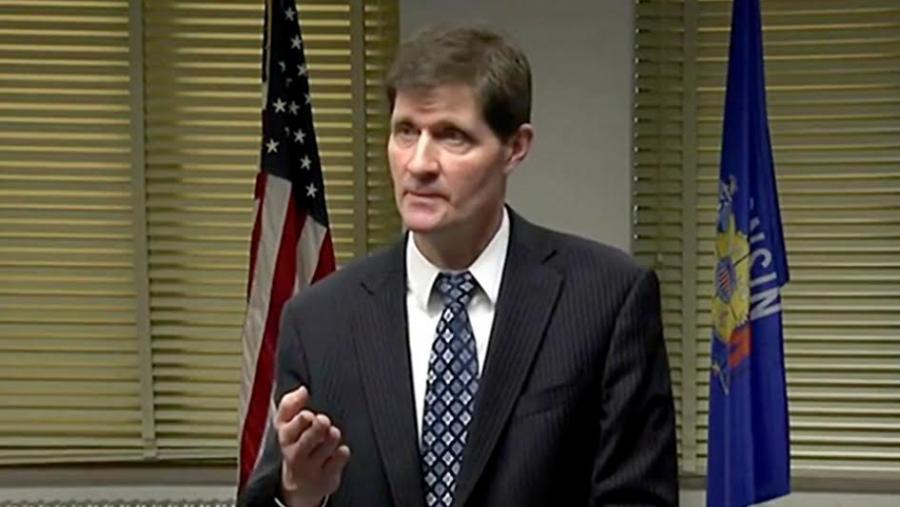 As prosecutors ready their case, the secret money advocates at the heart of the investigation are planning their next move.

Dark money maestro Eric O'Keefe, who sits on the board of Wisconsin Club for Growth, has declared that Chisholm "is not fit for public office" and "should not be allowed to serve out his term." He has threatened to get him disbarred, he has tried to get Scott Walker to fire him, and O'Keefe's high-powered, D.C. lawyers are suing Chisholm in federal court on behalf of Cindy Archer. Archer claims to be a victim of a renegade prosecutor, but she was a top Walker aide caught up in Chisolm's investigation of a sordid bid-rigging scheme detailed by the Center for Media and Democracy.

Now O'Keefe and his associates appear to be prepping to go after Chisholm in a low turn out primary, using the new tools they worked so hard to legalize in Wisconsin, a flood of coordinated secret money and phony "issue" ads.

In July 2015, the Wisconsin Supreme Court not only shut down the investigation of potentially illegal coordination between Governor Walker and dark money groups, they took the extraordinary measures of firing the Republican Special Prosecutor, who was hired to coordinate efforts at the behest of a bipartisan group of five District Attorneys, ordering the complete destruction of all evidence and throwing up roadblocks to any appeal by, for instance, telling prosecutors they could not use expert, outside counsel to help with the filing.

These actions were unprecedented and reminded many of the Saturday Night Massacre, when Richard Nixon fired U.S. Attorney General Archibald Cox and his successors during the Watergate investigations.

"My career in the military and as a federal prosecutor fighting violent criminals and terrorists did not fully prepare me for the tactics employed by these special interest groups," said Special Prosecutor Francis Schmitz. "To somehow remove the lawyer representing one of the parties after the opinion [has been issued] is extraordinary," said former state Supreme Court Justice Janine Geske.

The GOP controlled legislature took action in 2015 to retroactively decriminalize the activities at the heart of the investigation, making significant changes to Wisconsin's campaign finance law, exempting political corruption from the John Doe statute and dismantling the nonpartisan Wisconsin elections board.

Now the three Democratic prosecutors are slated to ask the U.S. Supreme Court to review the state Supreme Court ruling. At issue is the $10 million spent to elect the conservative majority of the Wisconsin Supreme Court by the very same groups—Wisconsin Club for Growth and Wisconsin Manufacturers and Commerce—that were under investigation in the John Doe probe.

According to the 2009 U.S. Supreme Court ruling in Caperton v. Massey, outsized spending in a judicial election could be significant enough to demand that judges recuse themselves. On this basis, Special Prosecutor Francis Schmitz had asked both Justice Prosser and Justice Gableman to recuse from the John Doe, but they failed to do so.

It is unknown whether prosecutors will also appeal on the merits of the case. It is notable that coordination between independent groups and candidates is prohibited in most states and at the federal level. In 2016, a state legislator in Montana was convicted of breaking state law after engaging in similar coordination and, in 2015, a political operative working on a federal campaign was sentenced to 24 months in prison after being prosecuted under federal law.

Common Cause's Jay Heck tells CMD that it makes sense that O'Keefe would go after Chisholm this election cycle. "The dark money groups want to protect the gains they have made in Wisconsin, changing the law to allow coordination between candidates and issue ad groups. They want to stop an appeal before it goes any further."

The prosecutors’ appeal is sure to have Wisconsin’s far-right yelling "partisan witch hunt" again. Yet, the reality is that Milwaukee DA John Chisholm has a long record of prosecuting Democrats for political corruption. In 2010, Chisholm used the John Doe process to prosecute Democratic Milwaukee County Supervisor Toni Clark on felony charges related to the use of just $6,300 in campaign funds. Scott Walker didn't call that a witch hunt; instead Walker said the case was "a reminder to all others in office that we must maintain the highest ethical standards."

Chisholm announced on April 18 that he would run for re-election; the primary is August 9th.

Chisholm's Democratic primary challenger is Verona Swanigan, an attorney and Milwaukee native who is new to electoral politics. Swanigan holds a law degree from Northern Illinois University (2005), and has practiced law out of her own firm, Swanigan Legal Services, for about a decade. She registered her campaign in August 2015, and released a video announcing her candidacy in November that focused on reducing crime and addressing domestic violence.

Swanigan is an African American who has participated in community rallies calling on the U.S. Department of Justice to investigate police brutality. She calls herself a "conservative democrat," but her campaign is being backed by well-known GOP political operative, Craig Peterson, who has worked closely with Wisconsin Club for Growth's Eric O'Keefe on efforts to reshape Milwaukee politics in recent years. According to news reports, Peterson has long been associated with Zigman Joseph Stephenson, a public relations firm, but has had financial troubles in recent years. Peterson has ties to former Assembly Speaker Scott Jensen, who was caught up in the "Caucus Scandal," an earlier John Doe prosecution of campaign finance abuses, and who now works for big money groups trying to privatize public schools.

Peterson had reported $250 in monetary contributions and $1,681 worth of in-kind contributions to Swanigan's campaign as of December 31, 2015, a substantial part of the campaign's $5,476 total take for the year. (Reports covering the first part of 2016 are not yet available.)

Earlier this spring, Peterson spearheaded an effort to reshape Milwaukee's city government through a secretive group called "Milwaukeeans for Self-Governance," which spent at least $200,000 on radio ads to influence mayoral and aldermanic races. The group, whose name strongly echoes that of the O'Keefe group "Citizens for Self-Governance", has not been formally registered, and its funders have not been disclosed, but their impact is being felt.

"It really feels like we're running against him, and not his so-called candidates," Alderman Bob Bauman, a veteran Common Council member told the Milwaukee Journal Sentinel. Bauman's opponent, who lost her race, was Peterson associate Monique Kelly, formerly known as Monique Taylor.

Peterson "is trying to build his credibility in the black community and build a power base," explains Murphy. Peterson needed to have some victories after he and his associates failed to get enough signatures to scuttle a Milwaukee street car project they spent a lot of time and effort on.

In the 2014 Milwaukee County Sheriff's race, a liberal dark money group spent big trying to unseat incumbent Sheriff David Clarke Jr. Clarke is a right-winger, a darling of Fox News and a Democrat in name only. The NRA rushed to his aid and influential right-wing radio urged Republicans in the county to turn out in the open democratic primary.

Another unregistered Peterson group calling itself "Citizens for Urban Justice" also came to his aid, running radio ads attacking his opponent. In the ads, Monique Taylor presented herself as a community activist and listed the names of African-American men killed by Milwaukee police, then said, "Now a lieutenant in that same police department wants to be our sheriff." The ads had a big impact in predominantly African-American wards in the city.

But Clarke, who is African-American, is better known for attacking the Black Lives Matter movement, which he has called "black slime," than for addressing the problem of police violence.

While he has been vague about the funding behind Milwaukeeans for Self-Governance and the city council takeover, Peterson has previously credited O'Keefe with arranging the funds to support Clarke. "Eric raised money for that campaign," Peterson told the Milwaukee Journal-Sentinel. "And I spent the money. That's another benefit to our relationship: He's good at raising it; I'm good at spending it."

Peterson also worked with the Wisconsin chapter of David Koch's Americans for Prosperity and Citizens for Responsible Government in an attempt to rally support against a modern streetcar project under development in Milwaukee. Instead of telling folks the truth—that the Kochs object to any type of clean energy transport, including trolleys and electric cars—the Peterson crew slammed the trolleys for furthering segregation. Peterson paid for radio ads featuring the brother of police shooting victim Dontre Hamilton urging listeners to send Mayor Barrett and John Chisholm a message by writing letters opposing the streetcar.

While the ads stated that they were "Paid for the Black Lives Matter Coalition," Peterson paid for them himself, according to Urban Milwaukee.

With big money friends like O’Keefe and the Kochs, who are trying to turn secret spending by millionaires and billionaires in campaigns and elections into a principled fight for "constitutionally protected free speech," Peterson is well positioned to unleash a tidal wave of phony "issue ads" at the last minute to sway a low turnout election. In the August 2014 Milwaukee Democratic primary, less than 114,000 voted compared to 332,000 in the November general election.

Jessica Mason contributed to this report. Learn more about Eric O'Keefe in the Progressive "Dark Money's Front Man" and in Sourcewatch.

Truly evil, amoral man.
Republican money to Democrat shows how nuts they are spending derail the train money on Chisholm opponent puzzling...
From every objective article ive read, John Chisholm has abused his office under these "john doe" investigations. He should be ashamed using the strong arm of his office for nothing more than intimidation! Amazing how no "left wing" groups who conducted the same activities were under scrutiny!!!
It's always interesting to read the viewpoints of the "Right" as they attempt to deflect the accusations made against them. I can only hope that the U.S. Supreme Court takes this issue up and finds in favor of the people of Wisconsin. It is about time Scott Walker and the corrupt Republican Party is brought up on Class I felony charges.
Chisholm's target, Archer, has not been charged with a crime. He screwed up, in a politically-motivated abuse of public office. He should be removed from office AND face attorney discipline. When scum like Chisholm are allowed to rule without checks on his power, the people are right to start thinking in terms of Tea Parties, Citizen Militias, and even voting for a bona fide idiot just to keep Hillary out.