Jon Romano, press secretary for "Fix the Debt" and its pet youth group, The Can Kicks Back, have been caught writing op-eds for college students and placing the identical op-eds in papers across the country.

Maximus, Inc. collected $3.4 million from the state of Wisconsin in consulting fees over the five-year period from 2004 to 2009, and now it turns out that the questionable advice the company gave may leave taxpayers out tens of millions of dollars in potential claims after a federal audit found improper Medicaid billings.

The McCutcheon case provides a good example of how advocates and the court's "conservative" Justices have methodically laid the groundwork for dismantling campaign finance laws.

Apparently the only thing both Democrats and Republicans can agree on in Washington, DC, is that they can't deal with bad press involving Honor Flight vets. 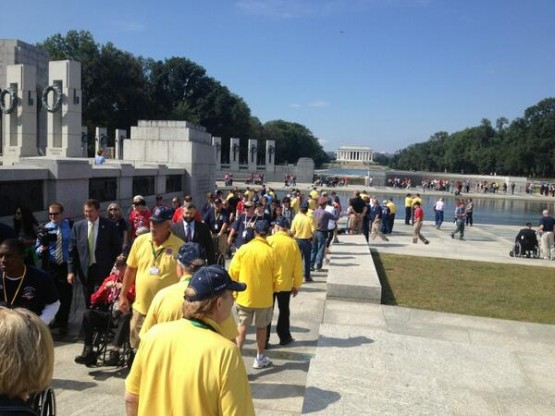 This led to absurd images of Republicans -- who had shut down the federal government, including all monuments and museums -- rushing to "aid" veterans shut out by monument closures. In the most revolting display, Rep. Randy Neugebauer (R-TX) publicly berated a National Park Service Ranger for a situation created entirely by Congress.

"The taxpayers have been left holding the bag.... As a result of this I think there is going to be a lot more oversight." Those were statements made by Nevada Assemblyman James Ohrenschall in an interview on Vegas Inc. September 21.

In a story most in the media missed, protestors gathered under the dome at the Mississippi state capitol earlier this year to oppose a bill that would allow the state Department of Human Services (DHS) to privatize everything from child protective services to nutrition programs for the elderly.