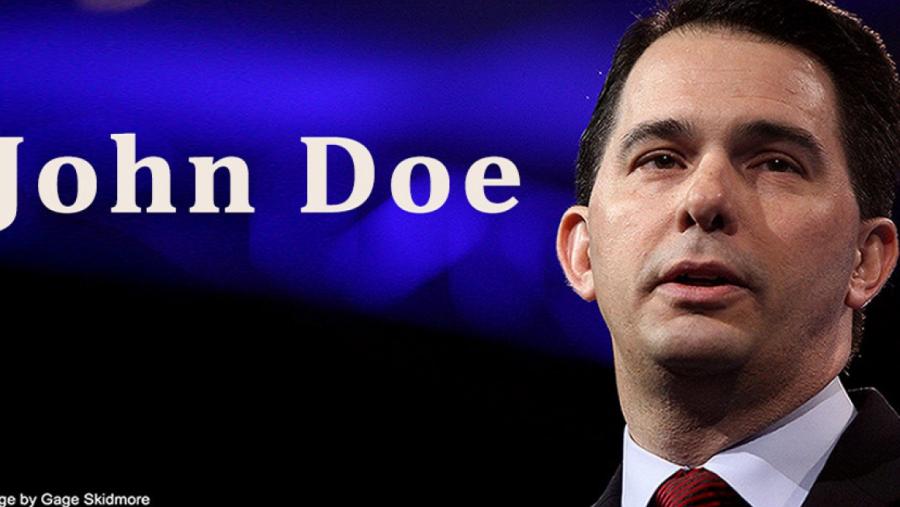 Transparency in campaign spending is overwhelmingly popular with both Democrats and Republicans, because average folk know that dirty deeds go on behind closed doors.

But the billionaires are battling back. The Koch brothers have a virtual cottage industry funding groups to advocate for "donor privacy," and they are campaigning hard against any state or federal law that dares to suggest dark money groups should be required to report their funders.

Milwaukee's Bradley Foundation funds propagandists like the Wall Street Journal's opinion writer, Kim Strassel, to pen books that argue that it's the little guy that will be hurt by dark money transparency, not the billionaires in the Koch Network who regularly pledge to spend $400 million to sway campaigns and elections. Her book "Intimidation Game" never speaks of the dirty deals that can go on behind closed doors when voters have no idea who is ladling on the cash to aid politicians. Instead, she argues, that in pushing for good campaign and ethics laws, the left is bullying and harassing the right and attempting to "silence free speech."

But a refreshing wind blew through Congress this week when the House Committee on Administration held a hearing talking about the real harms that dark money can pose to real people.

Pulling Back the Curtain on Dark Money

On the first day of the 116th Congress, House Democrats decided to introduce as their first bill, HR1 "For the People Act," aimed at ensuring voting rights, eliminating partisan gerrymandering, strengthening ethics systems for all three branches of government, and reforming the campaign finance system.

Among other things, the bill targets groups that file with the IRS as tax-exempt 501(c)(4) "charitable" organizations, like the Kochs' Americans for Prosperity, which spend tens of millions every election cycle propping up candidates with phony issue ads and other expenditures, but tell the IRS they are spending $0 on politics so they don't have to disclose their donors.

Yesterday, the House Committee on Administration, chaired by Rep. Zoe Lofgren, held a hearing on the reform measure, and Wisconsin was featured as a national poster child on the harms that come to real people when millionaires and billionaires are allowed to give secret campaign donations and receive secret favors from their pet politicians.

"I'm here to tell you the true story about how a Texas billionaire CEO secretly gave $750,000 to a dark money group in exchange for legislation that would retroactively block 173 severely lead-poisoned children from holding his company accountable," testified Peter Earle, a Milwaukee attorney who spent years representing the children in court.

Earle was talking about Harold Simmons and his company, NL Industries -- formerly known as the National Lead Company which made the "Dutch Boy" line of lead paint. A 2016 exposé in the Guardian detailed how Simmons secretly gave $750,000 in corporate and personal checks to a dark money group run by Walker's top political adviser called Wisconsin Club for Growth.

What followed next was stomach churning.

"In the pre-dawn hours of June 5, 2013, a legislator quietly slipped the retroactive immunity provision drafted by NL Industries into a 532-page budget bill. The retroactive provision had no authors or sponsors and no notice was given to the public that it was under consideration. Public records showed that NL Industries' lobbyist handed the statutory change to top legislators in a memo with 'NL language' handwritten on top. The suggested change was fast-tracked through both houses of the legislature and enacted into law on January 27, 2011," testified Earle.

"It is indeed a sad day for our democracy when a rich and powerful corporate CEO can deprive innocent victims of lead poisoning their day in court just because he could afford to secretly donate huge amounts of money to greedy and ruthless politicians. This is even more egregious when one considers that these former lead paint companies knowingly caused the single most catastrophic environmental public health epidemic affecting children in U.S. history," said Earle.

Although paint companies were forced to stop putting lead in paint back in the 1970s, every year, a huge number of kids are poisoned by lead paint in Wisconsin. Wisconsin's lead poisoning level among children is higher than the national average, and disproportionately affects children of color. While Walker was governor, he refused to tighten the state's lead paint standards as required by federal law.

HR1 is needed because "if people can vote, then things can happen, but people have to know who is paying who," said Earle, and what favors they are getting from politicians.

Guardian Revelations Show It's Not about "Issues" but Winning

Earle learned the details of who pulled the rug out from under his clients only because a whistleblower gave documents to the Guardian regarding the Wisconsin "John Doe" investigation of campaign finance abuses in the state. The probe was run by a Republican prosecutor until it was stopped by right-wing justices on the state Supreme Court, who were elected with help from the very groups under investigation.

Thanks to the intrepid reporters at the Guardian the secret cache of dark money documents and checks was published in 2016, and the public for the first time got a very rare glimpse of what really happens behind closed doors of a big dark money operation.

The Kochs, Wisconsin Club for Growth, and a number of these 501(c)(4) "non-profit" organizations justify their tax-exempt status by claiming that they are merely "educational" institutions and they are spending money and exercising their First Amendment rights in an election cycle just to educate the voters on issues.

But behind the scenes, they tell a very different tale.

Scott Walker's top advisor, R.J. Johnson was creating ads and slapping on disclaimers from multiple groups to win elections, not promote issues. He boasts repeatedly in talking points written for Walker that the ads gave candidates the margin of victory and "moved independent swing voters to the GOP candidate." He cut an ad and funneled money to one anti-abortion group, Wisconsin Family Action, not to talk about abortion, but to attack one candidate for a car accident he was involved in. "We were behind by 2 when we started [the Fred Clark] race and won by 4," wrote Johnson.

And the Guardian documents showed robust probable cause for the type of campaign finance investigation that is regularly conducted in states. In one telling email, Nick Ayers, formerly of the Republican Governors Association, and until recently Mike Pence's Chief of Staff, laid out a coordinated strategy to defend the senators and Walker in the recall races.

The March 25, 2011, email from Ayers to Scott Walker cc'ing Republican National Committee chair Reince Priebus read in part: "Spoke to Gillespie this morning. My sense is that everyone's heart (AFP, WIGOP, RSLC, RGA, CFG) is in the right place but no one is clear on the entire battle plan, and that is leaving very vulnerable gaps in both the planning and execution of a winning strategy."

Here, Ayers names key groups under investigation: Ed Gillespie from the Republican State Leadership Conference (RSLC), the Kochs' Americans for Prosperity (AFP), the Wisconsin Republican Party (WIGOP), and Club for Growth (CFG). The groups would go on to spend some $30 million in the recall races -- $20 million via Wisconsin Club for Growth, $9.5 million via the Republican Governors Association (RGA) -- an enormous sum in a small state where only 2.1 million votes were cast in Walker's 2010 election. RGA and RSLC were registered as express advocacy/independent expenditure groups in the state and they had sworn an oath in writing not to coordinate with candidates.

"Experts" Standing Up for Dark Money

On the flip side, defending dark money at the hearing, was David Keating, formerly of the national dark money group called Club for Growth, currently at a group with a loftier title, The Institute for Free Speech. The group is funded by the Koch-tied Donors Trust, the Bradley Foundation, the DeVos family, and others to protect the free speech rights of deep-pocketed donors.

Keating had a grave warning for the committee. HR1 "hurts the non-profit groups working for social change and a better America," he said with a straight face. Plus, it will harm the free speech rights of average Americans, "you would be a fool to speak about government policy without having a lawyer representing you."

This is utter nonsense says attorney Brendan Fischer of the Campaign Legal Center. "HR1's disclosure provisions only kick in once an organization spends over $50,000 on political ads, or funnels $50,000 or more to another group that runs political ads, and would only require disclosure of wealthy donors giving over $10,000. If donors specify that their funds can't be used for political spending then their names won't be disclosed," Fischer stated.

Keating argued that donors need their privacy. He likened the needs of big money spenders to the gay rights movement not wanting to have their members disclosed.

At that point, Rep. Jamie Raskin of Maryland had had enough. He interrupted to ask: "Because the corporations have no sexual orientation would you agree that corporations should be required to disclose their money? If you look at Citizens United we are actually talking about for business corporations here."

But Keating deflected the hard questions and was not called out on his dark money roots. Notably, Keating himself makes and appearance in the Guardian documents, in an email demanding answers from R.J. Johnson about the legality of his actions in Wisconsin.

In the aftermath of Wisconsin's John Doe, the Kochs have bankrolled a cottage industry of groups to protect the "free speech" rights of dark money non-profits. The Koch-funded American Legislative Exchange Council (ALEC) would launch an "institute" to "protect free speech" and ALEC would sponsor legislation to keep the identity of (c)(3) and (c)(4) donors secret. ALEC, long funded by Koch Industries, would protect the ability of the Koch brothers to give unlimited sums in campaigns and elections under the guise of protecting "average citizens" giving money to community groups.

"To ensure that our democracy lives up to the promise of self-government, voters must have the information they need to hold our elected officials accountable. Citizens can't exercise their right to self-governance if we don't know who is funding our representatives," said Earle to the committee.

HR1 is a big step in the right direction.

From this article: "In the pre-dawn hours of June 5, 2013, a legislator quietly slipped the retroactive immunity provision drafted by NL Industries into a 532-page budget bill. The retroactive provision had no authors or sponsors and no notice was given to the public that it was under consideration. Public records showed that NL Industries' lobbyist handed the statutory change to top legislators in a memo with 'NL language' handwritten on top. The suggested change was fast-tracked through both houses of the legislature and enacted into law on January 27, 2011," testified Earle. Uhhh...what? Was the tracking so fast that it spun backward some time/space continuum?