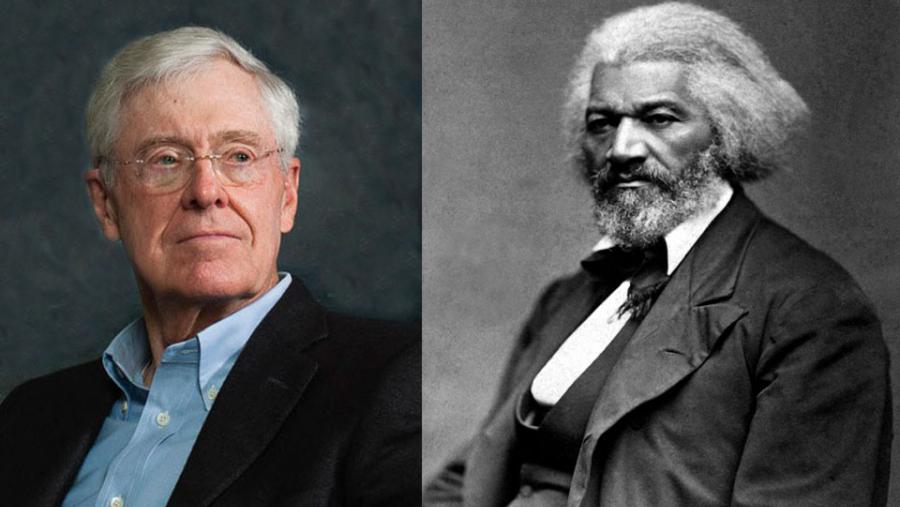 The billionaire industrialists Charles and David Koch, and their network of donors gathered last week at a swank Palm Springs resort for their annual confab of millionaires and billionaires who have committed to funnel at least $100,000 annually to the Koch political operation, which rivals the Republican Party in expenditures and expertise.

Charles Koch, who has spent millions on paid advertising to burnish the image Koch Industries, one of the nation's top toxic polluters, is peddling a new brand.

Instead of rapacious capitalism, Charles said he wants to "unite with people across the whole spectrum of viewpoints, of different ideas, including those who have been adversaries."

"This attitude of holding against others who have different beliefs is tearing our country apart. What we're planning to do, and what we're doing, is bringing people together," he said as attendees enjoyed wine and hors d'oeuvres.

Charles was in full kumbaya mode.

He credited the Koch Network of donors for helping to pass the 2017 tax reform bill and the 2018 bipartisan criminal justice reform bill, which eases mandatory minimums for federal prisoners. He announced the Kochs would be working on new bipartisan initiatives on education and securing permanent legal status for "Dreamers." He distanced himself again from Trump, whose view on tariffs have rankled the free marketers.

The Kochs unveiled a new coalition of businesses, including the U.S. Chamber of Commerce, the National Retail Federation, the National Restaurant Association, that agreed to hire workers with criminal backgrounds in the wake of the new criminal justice bill which will reduce incarcerations.

The announcements were hailed as "a turn away from partisan politics" by the Washington Post and "Bipartisanship a New Hope" in the National Review.

Charles failed to mention that the brothers stood to gain $1.4 billion from the Trump tax bill. He failed to mention Koch Industries' decades of support for policies, such as the American Legislative Exchange Council's "Truth in Sentencing" bill, which spread to more than half the states and required defendants to serve 85 percent of their sentence behind bars. Koch Industries has long funded and had a representative serve on the corporate board of ALEC, giving it a vote on all ALEC "model bills."

And would it be too, too cynical of me to point out that the Chamber, the National Restaurant Association, and the National Retail Association have lobbied for decades to keep the minimum wage at rock bottom and are currently facing a shortage of low-wage workers?

Charles said he would "unite with anybody to do right, and no one to do wrong" quoting "social change entrepreneur" Frederick Douglass. Douglass, the famed abolitionist whose journey from slavery to orator, author, and statesman continues to inspire, has been pressed into service as a "libertarian" by the Koch-funded Reason Magazine and Goldwater Institute litigators, (another institution that has lobbied for a sub-minimum wage).

But is it "right" that Koch is pursuing? Or some good old-fashioned positive publicity that the invitation-only press in attendance were only too willing to provide?

Let's face it rapacious capitalism is the raison d'etre of the Koch Network.

Let's not forget that the Kochs led the charge against Obamacare, secretly bankrolling the groups involved in a phony "Tea Party" uprising, and pushing a dozen ALEC model bills in statehouses nationwide to stymie the expansion of both the Affordable Care Act (ACA) and Medicaid, two critical programs that save lives every single day. In 2014, one Koch operative told the New York Times that the group's sustained opposition to the ACA was an effort to convince America that big government was bad government and a mere prelude to the fight over climate change. The Kochs also fund the Republican Attorney Generals Association as it pursues another constitutional attack on the ACA, a last ditch, desperate attempt to rip health care away from 20 million people.

Let's not forget that the Kochs, through ALEC, are working to strip dying mesothelioma victims -- veterans, firefighters, teachers -- of their ability to seek justice in the courts from the companies that poisoned them. As CMD first discovered, Koch Industries has asbestos liability along with other ALEC firms including Nationwide. The misnamed "Asbestos Transparency Act," is an ALEC effort to run out the clock on dying asbestos victims, denying their families some small justice in the court system that could pay for medical debt and otherwise help families recover.

Let's not forget, as the outlines of the looming climate catastrophe are becoming clearer, that the Kochs continue to be a national outlier, not just profiting from polluting the planet, but actively attacking clean, safe renewable energy policy. Through ALEC, the Kochs support bills in the states to repeal state renewable energy standards, increase fees for home solar users, dismantle the Clean Power Plan, promote pipelines, attack the EPA, end subsidies for electric cars (but not fossil fuels), and roll back fuel-efficiency standards for cars. How crazy do you have to be to think that is a good idea?

Even ExxonMobil, a decades-long ALEC board member, ditched ALEC in 2018 as being so extreme, it threatened to give Exxon a bad name.

The Koch Network's size and spending, plus its massive voter list (which holds 1,800 data points on some 200 million voters), has rivaled the national Republican Party in recent elections. The Kochs may be staying away from helping Trump, but they will pour their cash into GOP candidates across the nation in 2020, and into a dark money "infrastructure" that aids and abets them.

Frederick Douglass famously advised: "Power concedes nothing without a demand, it never has and it never will."

With dire new data emerging from climate scientists on a weekly basis, many in Congress are ready to make those urgent demands.

The Trump administration may not know it, but the carbon tax has become a mainstream policy position in the United States and around the globe, backed not only by legislators like U.S. Senator Bernie Sanders, but also by a raft of former Federal Reserve chairs and mainstream economists who know it is the quickest way to change the behavior of fossil fuel companies.

"The fossil fuel industry for too long has shifted these enormous costs of carbon pollution onto the public, walking away with billions in profits while their emissions help destroy the planet," said Sanders. Sander's carbon tax bill will work to ensure that the "price of fossil fuels will reflect their real costs to our communities." In addition, Congresswoman Alexandria Ocasio-Cortez is pushing a Green New Deal, a WWII-style mobilization to move the United States to 100 percent renewable energy in short order.

It's also time to demand that the Koch Network and its many front groups -- including ALEC -- disband, get out of politics, and allow truly democratic institutions to thrive.