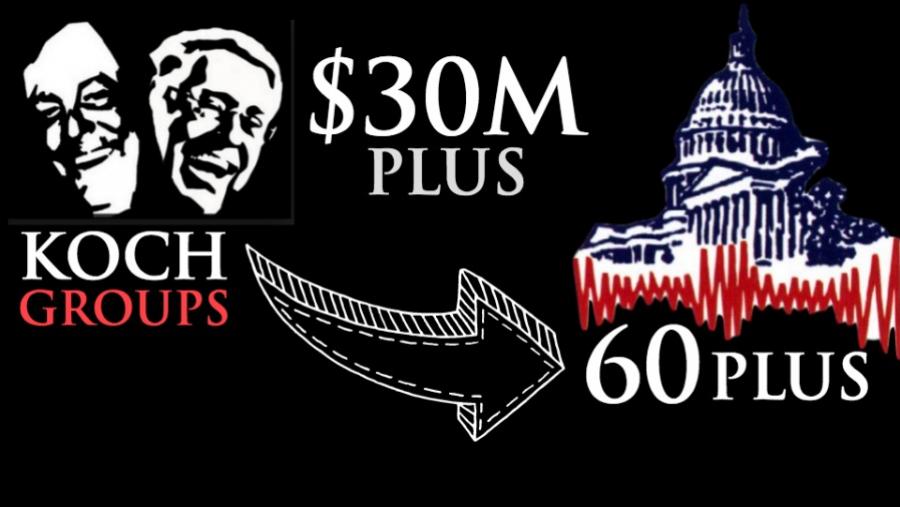 Consumers for Smart Solar, the group promoting an anti-home-solar constitutional amendment in Florida, has collected half a million dollars from the 60 Plus Association, a group that has itself received at least $34 million since 2010 from organizations financially backed by the Koch brothers.

Unlike most states, Florida does not allow homeowners to enter into contracts for the no-upfront-cost installation of solar on their homes. In other states, this freedom has contributed to the dramatic 80% increase in home solar installations across the US in 2014, and seen large financial investments from corporations like Google.

Rival constitutional amendments are being proposed for the Florida ballot in 2016.

One of these would allow homeowners increased rights to install solar energy; that one is backed by consumer and environmental organizations.

The other—confusingly named Consumers for Smart Solar since it is actually about limiting consumer access to solar—is backed by the Koch-funded groups and the electricity utilities, and it would amend the Florida constitution to protect the fossil fuel industry monopoly in the state.

The 60 Plus Association had already contributed $50,000 each month in July, August and September 2015, as has been previously reported on by the Center for Media and Democracy/PRWatch.

According to Florida campaign filings for October 2015, the group is doubling down on its anti-consumer investment, providing $350,000 in that month alone, according to legally mandated disclosures by Consumers for Smart Solar.

60 Plus has now given a half million dollars in just four months since July, with still thirteen more reporting months to go before the November 2016 election.

In 2013, 60 Plus controversially ran TV ads in Arizona, opposing the development of home solar in that state by supporting increased costs for homeowners who can sell any excess solar energy they generate back to the grid. After initial denials lasting months, it was eventually revealed by a reporter from the Arizona Republic that Arizona Public Service, the state's largest utility, had helped underwrite the Koch-funded group to run the ads.

The Koch-funded American Legislative Exchange Council (ALEC) has also railed against consumers who install solar on their homes, calling them "free riders on the system," and promoting so-called "model" legislation aimed at increasing solar users costs (that legislation was voted on behind closed doors at an ALEC meeting where corporate lobbyists vote as equals with state legislators).

CMD launched ALECexposed.org in 2011, revealing the entire ALEC legislative agenda and has continued to report on the group since, launching the ALECClimateChangeDenial.org website in 2015 to expose the climate change denial promoted by the organization. In the past three years, more than 100 corporations have dumped ALEC, including Google whose leader cited ALEC's climate change denial as the reason for doing so. "I think the consensus within the company was that that was some sort of mistake, and so we’re trying to not do that in the future," Chairman Eric Schmidt told National Public Radio.

As citizens in a free country, we must fight against the Koch brothers and all of their associations. We should have the right to install solar power on homes we own, if we so desire. Why don't the utility companies get into the solar, and other alternate power business themselves instead of fighting the ways of the future. This really upsets me to think that some wealthy people can hurt the majority just to make a buck.
The good news is that not even the Koch brothers can stop the hands of time which means they will soon be dead. With them will also die the old ways of protecting the status quo in order to save one's fortune. The next generation gets it, the tide has turned and they can't stop it! Sure, they may win (bribe) a few more battles, but the war has been won, you can see it and sense this truth. Just the fact that they have to come up with the coy organization and fund the deception proves. So have your fun bros...your time is nearly up and your special spot spot in hell and now a it's you.
When solar constitutes only a very small fraction of one percent of electricity, and is generated at times of peak demand - why are utilities and Koch's so opposed. The regulatory and legislative actions they pursue are to increase the fixed monthly charge (so no "free riders") and keep the cost per KWH of power consumed low. The real reason for this is that electricity use in the US has plateaued because of conservation and efficiency. If the cost per KWH hour is small then not only is the solar industry damaged but much more importantly the economic reasons for conservation disappears and use rises along with dividends and bonuses. Solar is the whipping boy. Conservation is the real issue for ALEC. Pay no attention to the man behind the curtain.!