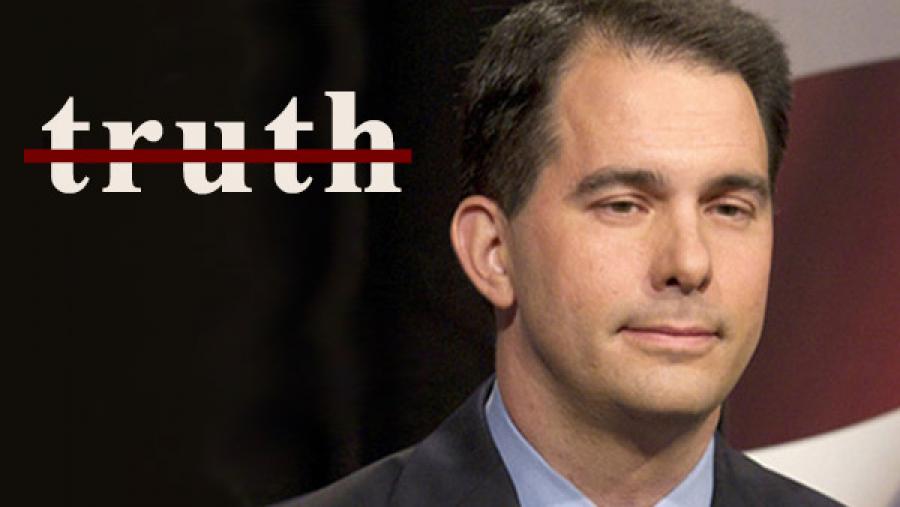 by Jonas Persson and Mary Bottari

Emails obtained by CMD under an open records request give a behind-the-scenes look at Gov. Scott Walker’s tortuous efforts to explain changes made to the mission statement of the University of Wisconsin System in his 2015-2017 Executive Budget bill.

The emails reveal that controversial edits, which struck "the search for truth" and other aspects of the Wisconsin Idea from the statutes, was far from a "drafting error" or "miscommunication." The instructions originated with Walker’s Chief of Staff Eric Schutt, who was copied at least twice on the final language. This contradicts a claim made by Laurel Patrick, the governor's press secretary, to the state's largest newspaper that the final version "was not seen or approved by our office."

On February 4, CMD broke the story of how Gov. Walker had gutted the Wisconsin Idea in his 1,900 page budget bill. In the Walker budget, the century-old Wisconsin Idea of serving people "beyond the boundaries of the campus" suffered extensive cuts and a line about meeting "the state’s workforce needs" was added.

By noon that day, CMD's story was taken up by the state's largest paper, the Milwaukee Journal Sentinel, and The Nation started to argue that Walker "is launching a war on the truth. Literally." By early afternoon, the story was in the Washington Post and the New York Times. The "Wisconsin Idea" was trending on Facebook and Twitter exploded with indignation and gallows humor, while parodies cropped up of Walker editing other historical documents.

The uproar forced the governor, who did not attend the UW System and failed to graduate from Marquette University, to explain his intentions. When asked by reporters that morning, he initially argued that the changes to the UW mission were made "so that the focus would be honed in ... making sure that we prepare individuals in this state ... for the jobs and opportunities that are available in the state."

But as the story was going national, Walker was forced to backtrack. The changes, he now told his followers on Twitter that afternoon, were the result of a "drafting error." But suspicions lingered. In search of answers, the Journal Sentinel began to page through the massive drafting file and uncovered that Walker's budget team at the Department of Administration (DOA) had specifically asked for the changes.

Walker then issued a lengthy statement on February 5 blaming "miscommunication" between his executive office and his budget staff in the DOA. "Unfortunately, when my office told the budget staff to keep it simple, they took that to mean that we only wanted workforce readiness language in the mission when we really wanted the language added to the existing mission statement," the statement explains.

In other words, Walker's staff had instructed DOA to include a statement on workforce readiness, but instead DOA budget analysts went rogue and struck the Wisconsin Idea—something which caught Walker's office by surprise. On February 6, Michael Heifetz, the State Budget Director at DOA took responsibility.

However, new emails obtained by CMD under an open records request tell a different story.

Walker’s claim that "miscommunication" caused the workforce readiness provision being added to the exclusion of the "search for truth" and other mission language is contradicted by an email from Nathan Schwanz to Walker’s policy advisor Waylon Hurlburt explaining that the instructions came from Walker Chief of Staff Eric Schutt:

"ES [Chief of Staff Eric Schutt] had indicated their mission statement should be short and to the point—3 or so expectations of the state, some cans and cannots, and that’s it."

The emails also show that Schwanz consistently copied Schutt on email correspondence containing multiple drafts of the UW budget section just days before the budget's introduction. Both drafts that CMD reviewed contained the final version of the language which struck the Wisconsin Idea from the UW mission statement.

Emails obtained by CMD reveal that Walker’s press secretary Laurel Patrick attempted to distance the governor's office from the flap. She assured Jason Stein with the Milwaukee Journal Sentinel that: "The final version of the language was not seen or approved by our office."

The emails also show Walker staff scrambling to explain what happened in the hours after CMD broke the news on February 4.

When a reporter first contacted Laurel Patrick for an explanation, the DOA was contacted and Schwanz wrote two possible responses for the administration by 1:30 p.m.

In the first one, Schwanz explained that to reflect the fact that the budget was granting the UW autonomy as a "public authority" the governor had recommended that "permissive portions and statements be kept" while "dictatorial and repetitive portions" be removed.

Perhaps "dictatorial and repetitive" did not strike the right note. The statement was not used.

The second version was more poetic, reading in part: "The Wisconsin Idea does not exist in the statutes or on paper alone. It exists in the hearts and minds of Wisconsinites across our great state."

The mounting pressure called for damage control, and the Walker administration instead hit upon the "drafting error" explanation, tweeting that message at 3:00 p.m.

CMD also obtained emails from February 5 detailing rushed back-and-forth communication between the governor’s office and the DOA in preparation for Walker’s formal statement. The emails show the staff attempting to spin the massive $300 million in cuts to the UW as not all that bad. Waylon Hurlburt in the governor's office asked that the cuts be compared to cuts made by Democrat Governor Jim Doyle did in 2003. And this spin made it to the final statement:

"In the 2003/05 state budget, former Governor Jim Doyle cut the UW by $250 million. He did not give them reforms to make up for the lost state aid. They made up most of it with higher tuition. Our proposal gives new cost-saving reforms to the UW through an authority—while freezing tuition. We believe it is a good plan. Let the debate begin."

But as PolitiFact would go on to show, this spin misleads. "The UW had been spared deep cuts in the years leading up to 2003 … By contrast, under Walker, his proposed 2015-17 reduction comes four years after cuts of $250 million to universities in his first budget." The review goes on to point out that "Walker has proposed deeper cuts in the UW System than Doyle in less time."

Walker Backtracks on Idea and Authority, but Devastating Cuts Remain

But the $300 million cut remains on the table, and the official line that there is no reason to worry as tuition is frozen is not much of a comfort to UW staff and graduate students whose jobs are on the line. And if a plan unveiled last month by the UW System is anything to go by, students will be forced to offset the cost in dramatic tuition hikes of 40 to 80 percent once the freeze expires in the 2017-2018 school year.

Notably, that will be well after the November 2016 presidential election for which Walker is an undeclared candidate.