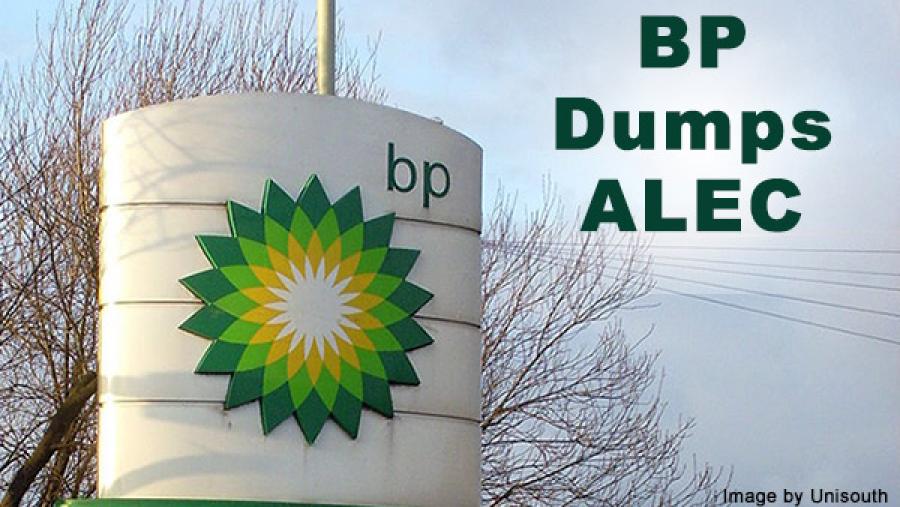 BP announced Monday that it was cutting ties with the American Legislative Exchange Council, the controversial corporate bill mill. It is the third major fossil fuel company to sever ties with ALEC, after Occidental Petroleum in 2014. ExxonMobil remains on the ALEC private sector board.

"We continually assess our engagements with policy and advocacy organizations and based on our most recent assessment, we have determined that we can effectively pursue policy matters of current interest to BP without renewing our membership in ALEC," the spokesman told the National Review.

BP (formerly known as "British Petroleum") is a global oil, gas, and chemical company headquartered in London. It is responsible for the largest environmental disaster ever in the United States: the April 20, 2010, blowout of its Deepwater Horizon oil well in the Gulf of Mexico. BP still faces some $13.7 billion dollars in civil liability in the case.

Four months later in August 2011, BP was a "President" level sponsor of the 2011 American Legislative Exchange Council Annual Conference in New Orleans, which equated to a $100,000 donation, according to ALEC corporate sponsorship rates. BP was also a sponsor of the Louisiana Welcome Reception at the meeting.

Tim Smith of Walden Asset Management told Common Cause “Obviously BP in its annual review assessed the pros and cons of continued membership in ALEC and this year decided that it was wise to step back and drop membership. In doing so, they have followed decisions by over 100 companies including Conoco Phillips and Occidental Petroleum. Obviously BP’s decision adds pressure on companies like ExxonMobil, Chevron and Pfizer that are longstanding and ongoing members of ALEC.”

“BP made the right decision in joining the over 100 companies that have left ALEC, which misleads taxpayers and the IRS about its extensive lobbying activities,” said Arn Pearson, Vice President of Litigation at Common Cause.

In recent months, ALEC has garnered negative attention for “doubling down” on its climate denial and anti-environmental agenda, most recently peddling the idea that increasing carbon dioxide would be a good thing while simultaneously pushing numerous bills and other measures to try to stop the Environmental Protection Agency from regulating carbon dioxide emissions and promulgating rules to address climate change. ALEC has also been in the news for its work to block campaigns to raise the wage and preempt paid sick leave ordinances.

In September 2014, Google Executive Chairman Eric Schmidt admitted that Google had made a mistake in providing ALEC with funding because of its position on climate change and its opposition to renewable energy. "We should not be aligned with such people. They are just literally lying," Schmidt told NPR's Diane Rehm. Google's exit from ALEC was followed by a wave of departures from the high-tech industry including Facebook, Yelp, and Yahoo. ALEC's notoriety as a central player in peddling disinformation about climate to lawmakers while urging them not to do anything about climate change was highlighted this month in a speech in the chamber of the U.S. Senate by U.S. Senator Sheldon Whitehouse. Earlier this year, defense contractor Northrop Grumman also recently ended its relationship with ALEC, thanks to shareholder engagement from the Fond du Lac, Wisconsin-based Congregation of Sisters of St. Agnes and other concerned citizens and shareholders.

As of March 2015, at least 102 corporations and 19 non-profits--for a total of 121 private sector members--have publicly announced that they cut ties with ALEC. You can see a full list of companies that have cut ties here.

Mary, Do you think they dropped ALEC because of all the bad publicity already attached to BP? Also are they connected with the Koch Industries? Anyway, am glad to hear that another big money contributer to ALEC has severed ties.