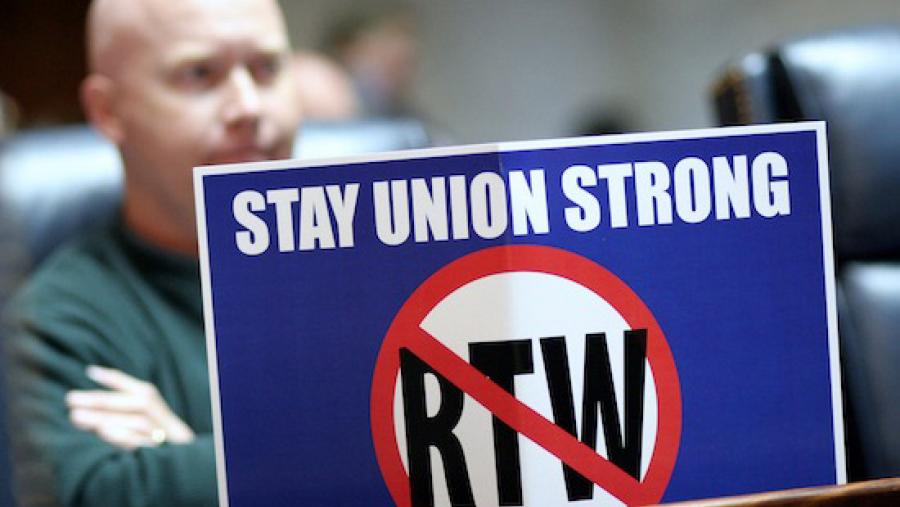 The American Legislative Exchange Council (ALEC) made headlines last week after Wisconsin Republicans introduced a virtually word-for-word copy of the ALEC “model” Right to Work Act, following on the heels of Michigan and other states that have taken up the ALEC-inspired anti-union measures in recent years.

But ALEC and its allies have also been pushing a new and unprecedented approach to defunding unions on a city-by-city basis through an ALEC offshoot, the American City County Exchange (ACCE). Since ACCE’s most recent meeting in December, held within ALEC's conference in Washington D.C., so-called right to work laws on the local level have been enacted in several Kentucky counties, and discussed in other states such as Illinois and Ohio.

The ultimate goal, according to speakers at the ACCE conference, is to defund labor unions, which are one of the few counterweights to corporate political influence.

ACCE attendees were told that local right to work is "more time consuming in a lot of ways, but you also get the vast money poured into [local] campaigns that you’d expect in a statewide situation, whether its Wisconsin or Michigan or Ohio or what have you," said Brent Yessin, a notorious union-buster and lawyer who is working with ACCE on the measures.

Right to work laws themselves cut off union funding by allowing workers to avoid paying for the costs of union representation, even as they benefit from union-negotiated wages and benefits. But pursuing right to work on the local level additionally draws unions into dozens or possibly hundreds of costly battles, further depleting labor’s resources and with it, their influence.

“There are literally thousands of targets for the initiative,” Yessin said at the ACCE meeting, according to an account from Steve Arnold, a progressive legislator from Fitchburg, Wisconsin, who attended the meeting and wrote about it for CMD/PRWatch.

"It is a death by a thousand cuts,” Yessin said.

“Yes There’s Going to Be a Lot of Litigation”

One big problem for the local laws is that they are almost certainly illegal under the federal Taft-Hartley Act, a 1947 law that allows a “state or territory” to enact right to work measures, but not cities or counties. This means that cities and counties that enact right to work restrictions will face costly lawsuits.

“Yes there’s going to be a lot of litigation,” Yessin reportedly said at the ACCE meeting, noting that defending the laws would be coordinated with the Heritage Foundation, which is funded by the Koch Brothers and numerous corporations that fund ALEC.

In recent months, ACCE and the Heritage Foundation have made the dubious claim that the Taft-Hartley act’s reference to “state or territory” encompasses cities and counties, a reading of the statute that courts have rejected in the past.

The Kentucky Attorney General has advised counties that local right to work measures are illegal under federal law. Even the National Right to Work Committee, one of the leading proponents of right to work measures, has conceded that local laws are illegal, noting last year that “there is zero reason to believe that any local Right to Work ordinances adopted in Kentucky or any other state will be upheld in court.”

But some Kentucky counties have forged ahead anyway, knowing they would be sued.

This is somewhat surprising. Traditionally, local elected officials have had little appetite for litigation. They live and work directly in the communities they represent, so are less likely to use their post to advance a national ideological agenda, much less use their neighbors’ tax dollars to defend a legal theory cooked up by Washington D.C. special interests.

With ACCE this is beginning to change. In order to encourage local governments to promote measures that will result in lawsuits, a mysteriously-funded nonprofit created by Yessin called “Protect My Paycheck” is offering to pay for the counties’ legal defense --& but only after the county maxes-out its insurance coverage. By playing along with the ACCE local right to work scheme, the counties are likely ensuring that their insurance premiums will increase, which will cost taxpayers into the future.

“We are looking for states where we can pass it locally and not worry that the legislature or governor or both will then repeal” the law, Yessin said.

“We . . . have met with officials in a number of counties, a number of states, state jurisdictions, county jurisdictions in Washington, Montana, Wisconsin, Ohio, Pennsylvania, Kentucky and others,” he said.