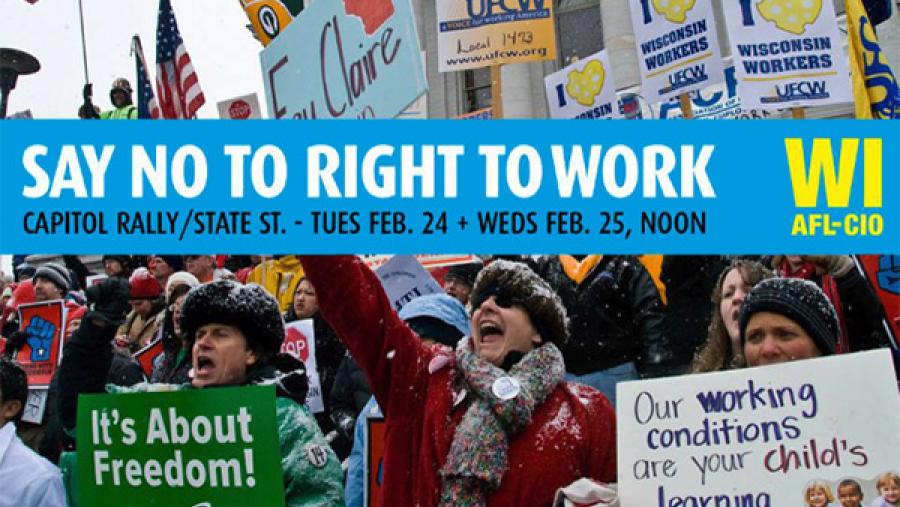 Wisconsin state legislators will meet in an "extraordinary session" today in order to take up so-called "right to work" legislation, a bill straight from the American Legislative Exchange Council playbook.

"This is something that once again could jump-start the state's economy," Senate Majority Leader Scott Fitzgerald (R-Juneau) said on Friday, but the explanation does not pass the laugh test.

Governor Walker's Act 10 legislation and draconian budget bill from 2011--which eviscerated public-sector unions, slashed spending on public programs and lavished tax breaks on corporations--was also supposed to "jump start" the economy. Walker's bill to "reform" the tort system by preventing consumers from suing corporations that cause injury or death was supposed to unleash the economy. And businesses were supposed to flood back into the state after the 2012 recall election, said Walker. But Wisconsin is still waiting, languishing number 33 out of 50 states in new job creation, the worst performance in the Upper Midwest.

Studies show that there is no economic argument for so-called “right-to-work” laws in Wisconsin. Despite the name, the laws do not provide a guaranteed right to employment or have anything to do with improving one’s ability to get or keep a job. They are, however, associated with lower wages and benefits for working people.

As a press conference Monday, Russ Krings, Directing Business Representative of International Association of Machinists and Aerospace Workers District 10, called out the lie. "Right to work," he said, has "nothing to do with jobs." Instead, Krings said, it will "bring everyone down, union and non-union families, and businesses we spend money at."

Why Is the State Interfering With a Private Business Relationship Between an Employer and a Union?

While Walker's Act 10 bill applied to workers whose salary was paid for by taxpayers, this bill applies to private-sector unions who have a business relationship with their employer.

It is being backed by out-of-state extremists such as the Koch-funded Americans for Prosperity which argues, “No employee should ever lose their job or be denied employment because they are forced to join a union.” But the argument is a red herring. The U.S. Supreme Court has long stated that nobody can be forced to join a union, or be forced to pay unions dues, or to have their dues go to political campaigns. Employers hire and fire employees, not unions.

John Schmitt, Business Manager Laborers International Union, Local 113 explained: "Nobody has to join the union. They join the union because they're part of a group that is a skilled, productive, and safe workforce."

What current federal and Wisconsin law allows, and what the right-to-work law would make illegal, are “fair share” agreements in union contracts that make all represented workers, including those choosing not to join the union, contribute to the costs of worker representation on the job. Fair share fees are not union dues. They can only cover costs associated with the union’s legal obligation to represent all workers, including non-members, on the job.

At a press conference called for Monday morning, representatives of several trade unions questioned both the reasoning and the heavy-handed tactics of how the law is being introduced--in a rush "extraordinary session" that doesn't give Wisconsin citizens sufficient time to react--and how it would interfere in the private business relationship between unions and employers.

Candice Owley, President of the Wisconsin Federation of Nurses & Health Professionals, said the proposed legislation amounts to "politicians going to extreme means to interfere with relations between unions and employers." Unions and employers "work together on staff and quality," she pointed out, and tearing down private-sector unions would do "great damage to those relations."

The harm is not just to union members but the community as a whole. Betsy Kippers, president of Wisconsin's largest teachers union, noted that due to Act 10, Walker's legislation that eviscerated the bargaining rights of teachers and other public employees, "we have larger class sizes. Now apply that to nurse and patient loads and you have a problem for patients, families and communities."

Several labor representatives pointed out that private sector unions develop training programs for their industries that are relied on by employees and employers alike. Dave Branson, Executive Director of the Building and Construction Trades Council of South Central Wisconsin, explained that building and trades unions "work closely with contractors to keep industry standards up" and that destroying unions' abilities to collect funds for their work would not only "lower standards of the middle class and ... hurt our wages" but also "hurt our training funds."

John Schmitt, of the Laborers, explained that union dues are used for many purposes. "We spent $2 million on training just for Laborers, we use no taxpayer money, but provide safe training for a productive workforce," adding, this is "a business model that works, and why not continue to do it this way?"

Sally Feistel of United Steelworkers pointed out that the union has a "great relationship with employers," saying that "employers have called legislators [to say] they don't want this bill."

Branson of the Building and Construction Trades Council said of the protests planned against the proposed legislation this week, "I think the members will be out here protesting. I'm sure that some of our contractors will, too. With the Wisconsin Contractor Coalition, over 400 contractors have signed on . . . saying that they don't want 'right to work,' they like the model that we have of the unions working with our contractors for our industry, to keep our standards up."

The labor leaders in the room who had fought for their entire lives for higher wages for working families and public policies such as a strong minimum wage, good public health and transportation systems and public investment in infrastructure were grim. Fitzgerald announced that he had the votes to fast-track the bill through the Senate making the public hearings and debate schedule for this week a pure masquerade.

The labor leaders were facing the dismantling of they structures and labor peace they had built over the years to help Wisconsin develop a high-road, high-wage economy.

Marty Biel, Executive Director of AFSCME Wisconsin, said the bill "would continue to tear apart the fabric of Wisconsin . . . at the a whim of ALEC."

ALEC and its local offshoot the American City County Exchange Council have described their anti-union strategy as "death by a thousand cuts."

Russ Krings of the Machinists and Aerospace Workers union spoke for many when he said, "people wanted to come work and live in Wisconsin because it's a good place to be. Now, with what is being done to schools and industry, they no longer want to."

Rebekah Wilce and Jody Knauss contributed to this article.