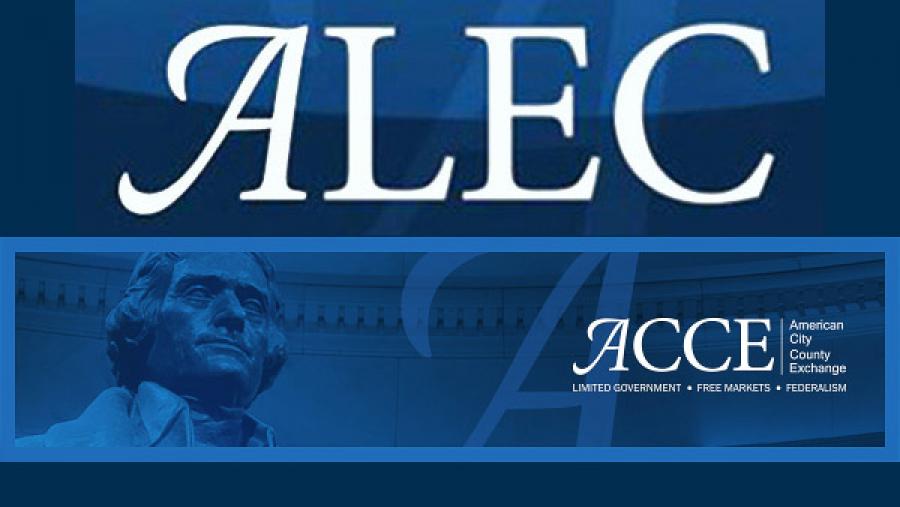 As the Center for Media and Democracy (CMD) has reported previously, the American City County Exchange (ACCE) was formed in 2014 as a local government version of the state legislature-focused American Legislative Exchange Council (ALEC). The new group's structure mimics its parent organization, with corporate lobbyists paying between $10,000 and $25,000 to sit side-by-side with city and county elected officials and vote on legislation that all too frequently benefits ALEC's corporate members.

The most substantive item on the preliminary agenda for ACCE's second annual meeting in San Diego in July 2015 is a "policy workshop" on "Local Labor Issues (Right to Work, Collective Bargaining, Pensions, and Minimum Wage)."

As CMD and the New York Times have reported, ACCE is central to a legally dubious strategy to push so-called "right to work" laws at the local level. These policies, which have nothing to do with any right to have or hold a job, are a transparent attempt to weaken unions by making it harder for them to function. Studies by the Economic Policy Institute have shown that wages are lower for both union and non-union members in states with right to work laws and that workers are less likely to have health insurance or pensions and more likely to have dangerous workplaces.

Like ALEC, ACCE uses language strategically to make its agenda sound more appealing. As The Guardian has reported, the agenda for ACCE's first meeting "revealingly listed ACCE's very first workshop under the simple title: 'Privatization' -- though in the final version the wording had been sanitized into: 'Effective Tools for Promoting Limited Government'."

"Privatization," after all, would have made it clear that ACCE's agenda is to transfer public assets and taxpayer dollars into private hands. But the rhetoric of "limited government" implies that ACCE is just advocating efficiency.

This message is especially attractive to small city and county governments operating on small budgets, as ACCE director Jon Russell knows. He even wrote a column last fall titled, "The Need for Better Stewardship over the Money Government Spends."

ACCE's website includes a helpful form letter prepared for "<Your Name Here>," which local elected officials use to ask for public funds to cover airfare, a hotel stay, meals, and conference fees at the ACCE conference.

The alleged benefit to the municipality? "Tangible takeaways" that will "make me a stronger advocate."

"With such a rich offering of educational content and innovative ideas <Your city name here> will benefit from my attendance at ACCE Annual Meeting," reads the helpful cookie cutter letter.

The letter associates ACCE with ALEC, "a nonpartisan 501(c)(3) organization dedicated to helping city leaders build better communities." There is no mention that ALEC is considered by critics to be a corporate bill mill, whose closed-door activities have generated ethics and IRS complaints. Over 100 companies have stopped funding ALEC due to ongoing controversies, most recently including ALEC's role in promoting climate change denial.

Stay tuned. It is not yet known how many local officials will take advantage of this special offer to hobnob with corporate America, or how much the conference might cost local taxpayers, but we are anxious to find out.