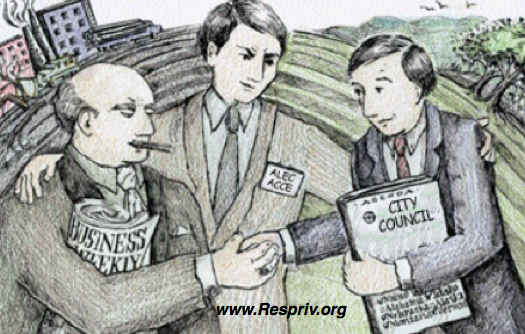 After forty years of pushing corporate-friendly policy in state legislatures, this week the American Legislative Exchange Council (ALEC) is launching its new project aimed at doing the same at the local level.

The director of the American City County Exchange (ACCE), Jon Russell, has been described as a "divisive" local government official, better known for pushing a national anti-immigrant agenda than for serving local interests and his constituents. ACCE's first meeting will coincide with ALEC's Annual Meeting in Dallas, Texas this week.

The creation of ACCE comes as national corporate and ideological interests increasingly try to exert influence over municipal government. For example, over the past year, David Koch's Americans for Prosperity has spent money on the mayoral race in Coralville, Iowa, the Board of Supervisors election in Iron County, Wisconsin, and school board elections in Douglas County, Colorado and Kenosha, Wisconsin.

ACCE is not expected to spend money in local elections, but its role could be viewed as providing the policy counterpart to electoral spending by the Kochs and others.

According to The Guardian, "An early draft of the agenda for [the] meeting revealingly listed ACCE’s very first workshop under the simple title: 'Privatization' – though in the final version the wording had been sanitized into: 'Effective Tools for Promoting Limited Government'." Privatization has been a long term goal for many ALEC member firms, and ALEC model bills have called for the creation of a special state commission to privatize public services, as well as to privative Social Security, Medicare and Medicaid, public schools, state pensions and more.

Another workshop at the inaugural ACCE meeting is titled "Releasing Local Governments From the Grip of Collective Bargaining," which fits into ALEC's long-standing antipathy towards unions.

"ACCE is just another effort to rig our democracy"

Its membership includes elected officials and corporate lobbyists, both of whom will have a say in approving "model" policy for local elected officials to introduce back home. According to ACCE's promotional materials, a benefit for corporate members is that it "enables business leaders to provide industry insights during policy creation."

Like ALEC, ACCE's funding appears comes almost entirely from its corporate members. Local elected officials are asked to pay just $100 for a two year membership, where corporate members pay between $10,000 and $25,000.

Some are skeptical of ALEC's newfound commitment to local control. For years, ALEC has pushed state-level preemption bills to prohibit local governments from enacting policies like paid sick days, a higher minimum wage, municipal broadband, or limits on GMOs, all of which would benefit ALEC's corporate members.

Given this history, many local officials aren't buying that ALEC and ACCE are looking out for the best interests of their constituents, as opposed to the interests of ACCE's corporate funders.

“ALEC and ACCE aren't about implementing a set of right-wing policies, they are about moving corporate America's agenda," Minneapolis Mayor Betsy Hodges told the Center for Media and Democracy.

"Local government is the best way to reflect the values and meet the unique needs of the local community," she said. "ACCE is just another effort to rig our democracy in favor of corporate special interests."

ACCE Director Described as "Divisive" and as a "Lightning Rod"

ALEC -- which has pushed "Stand Your Ground" legislation, voter ID restrictions, and prison privatization -- is no stranger to controversy. Neither is the new director of ACCE, Jon Russell. Russell describes himself as the "founder" of ACCE, although it is a project of ALEC and he is an ALEC employee.

Russell was on the city council of Washougel, Washington from 2006 until 2012, when he resigned his office for a position with Students for Life of America, an anti-abortion group based in Manassas, Virginia. He was elected to the town council in Culpepper, Virginia earlier this year.

During his tenure on the Washougel City Council, Russell was described by The Columbian newspaper as "one of Clark County's most divisive governmental figures" and "a lightning rod, to say the least."

He also made his share of enemies. The former Executive Director of the Washington Republican Party set up a blog to track what he perceived as Russell's misdeeds, which ranged from setting up fake usernames to post comments on news articles to taking balloons from children.

Upon Russell's departure from Washougel, fellow councilman Paul Greenlee said he hoped his replacement would be more focused on local issues. "When they come into city hall, they need to be focused on Washougal, not on some agenda."

When Russell ran for office two years later on the other side of the country in Culpepper, Virginia, Washougel residents tried to warn voters.

"As a former resident of the town Jon [Russell] served on during his term, I wouldn't let him near a leadership position of my town ever again," commented Washougel resident Greg Evans on a Culpepper article.

"Russell's commitment is to himself," wrote K.J. Hinton. "Russell was using his city council seat as a launching pad for higher office. Fortunately for us all, his abysmal congressional campaign was a complete failure, as was his fall back campaign for State Representative... where, had he won either, I would have found myself in the unfortunate position of being a constituent. Clearly, he was no longer interested in being a city councilman, and towards the end of his tenure, he missed the majority of meetings that he was supposed to attend."

Despite Russell's spotty history as a local elected official, he insists that his group ACCE has the solution for making local government better. We'll see.