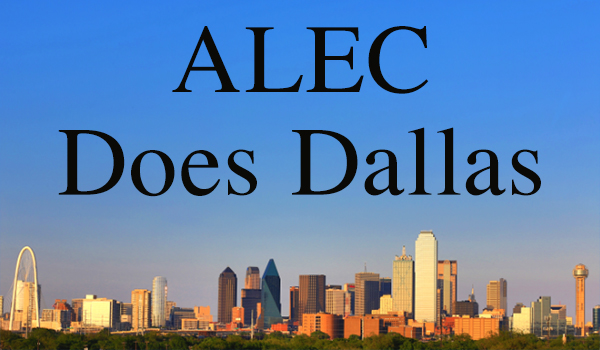 ALEC holds its 41st annual meeting in Dallas, Texas starting on Wednesday, July 30, 2014. At this largest of its three annual national conferences, state legislators from across the country will meet with corporate and special interest lobbyists behind closed doors to vote on "model" legislation to change state laws. Numerous agenda items are reviewed below.

ALEC's 40th annual meeting in Chicago was met by over a thousand protesters. Local groups in Texas held an educational event on Saturday, July 26, and are planning protest activities for Wednesday, July 30.

This year, ALEC has a new executive director, Lisa Britton Nelson, who is a former lobbyist for Visa and AOL Time Warner -- both of which have had ties to ALEC -- and also worked with Newt Gingrich and GOPAC. Several new companies also recently joined its "Private Enterprise Advisory Council": NetChoice, the National Federation of Independent Business, and K12 Inc.

Speakers at ALEC's annual meeting will include Texas Governor Rick Perry, former Wall Street Journal editorial board member Stephen Moore, and Newt Gingrich. "Policy workshops" include instructions on "How to Think and Talk About Climate and Energy Issues," "Energy Exports: A Free Market Economic Stimulus to Create Jobs and Grow the Economy," "EPA’s Proposed Carbon Emissions Rulemaking — What Does it Mean to States?" and more of the increasingly frequent attempts to spin efforts to limit the anti-democratic effects of unlimited political spending by billionaires and corporations as "Silencing Opposing Views: Attacks on Free Speech and Private Charitable Giving."

ALEC's "Justice Performance Project," which appears to have taken on many of the roles of the "Public Safety and Elections Task Force" that ALEC shuttered in the wake of the controversy following the death of Trayvon Martin, will discuss "efficiently engaging the public-private partnership with the surety bail industry." In other words, how to enrich bounty hunters.

Draft bills to be voted on by lobbyists alongside state legislators at the coming annual meeting include:

Learn more about the ALEC agenda at ALECexposed.org and follow #ALECexposed and @PRwatch for news from the Dallas conference this week.