5 Years after Citizens United, Democracy Is for Sale | PR Watch

5 Years after Citizens United, Democracy Is for Sale 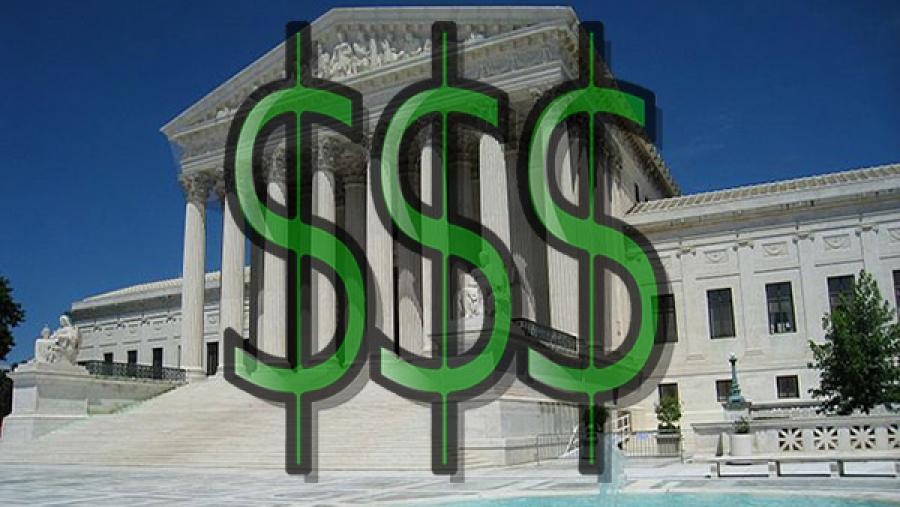 This week, Republican presidential hopefuls like Gov. Scott Walker, Gov. Chris Christie, and Sen. Rand Paul will travel to an exclusive resort near Palm Springs, Florida to kiss the rings of David and Charles Koch.

The New York Times calls it the "Koch primary."

Over the last five years, the Koch political network has evolved into what many have described as a shadow political party. The Kochs and their network of wealthy donors spent $300 million in the 2014 elections, after raising at least $400 million in the 2012 presidential races, with almost all of the spending passing through an array of political vehicles that are officially "independent" from candidates and political parties.

Today, candidates who receive the blessing of Charles and David can watch their political fortunes skyrocket, thanks to the huge financial resources the Kochs and their deep-pocketed allies can funnel into elections. Joni Ernst, for example, was a local elected official four years ago, yet this year was sworn-in as a U.S. Senator and delivered the Republican response to the State of the Union address--a rapid trajectory which she attributes to support from the Koch political network.

If a "Koch primary"--where a handful of wealthy donors can determine political futures, regardless of political party--sounds more like an oligarchy than a democracy, you are probably right.

The level of political influence made possible by such extravagant spending would have been all but impossible five years ago, before the U.S. Supreme Court's decision in Citizens United v. FEC. In that decision, a narrow majority of the Court struck down limits on "independent" spending, paving the way for Super PACs and dark money vehicles that can now spend literally billions of dollars influencing elections.

In the five years since Citizens United, Super PACs have spent one billion on federal elections, according to a Brennan Center analysis. Around 60 percent of that amount came from fewer than 200 people. Hundreds of millions more have been spent by so-called "dark money" groups--organizations that spend to influence elections but evade donor disclosure laws--and in the 11 most competitive U.S. Senate races in 2014, a majority of outside spending came from groups that keep their donors secret.

Although the Court's rationale in Citizens United rested on the notion that groups raising and spending unlimited funds would be "independent" of candidates and political parties, the reality is that around half of all Super PACs were formed to support a single candidate and are often led by the candidate's former staff, Public Citizen has found.

Besides the $1 billion-plus spent on federal elections after Citizens United, hundreds of millions more has been spent on increasingly expensive state races. David Koch's Americans for Prosperity, for example, spent $10 million supporting Governor Scott Walker in his 2012 recall election. In 2014, tens of millions were spent by outside groups in the Massachusetts governor's race, more than double the amount spent four years earlier.

And, in the years since Citizens United, judicial elections have increasingly been dominated by outside spending. At least $56.4 million was spent on state Supreme Court races between 2011 and 2012, according to Justice at Stake, raising serious concerns that justice is truly for sale. That concern is particularly pointed in Wisconsin, where the Court will be deciding a case potentially involving criminal liability for the majority's biggest supporters--and with it, ironically, deciding the future of Wisconsin campaign finance laws.

Although the unlimited spending made possible by Citizens United has allowed the Koch network to reshape U.S. politics and the Republican Party to advance their corporate and ideological interests, wealthy Democratic donors are increasingly stepping up their game. The political arena is becoming a billionaire's playground.

Elected Officials Responsive to Tiny Sliver of Ultra-Wealthy Donors, Rather than Average Americans

As limits on money in elections continue to deteriorate, candidates must increasingly rely on big campaign spending from a tiny sliver of wealthy individuals like the Kochs. Elected officials, in turn, are far more responsive to the preferences of the wealthy--who bankroll their campaigns--than to the average voter, and a large body of research shows that the rich have different policy priorities than the general public, as Demos and Common Cause have documented.

For example, vast majorities of Americans support raising the minimum wage and enacting paid sick days, but these policies are not a priority for the wealthy donor class, and are actively opposed by entrenched corporate interests (and big political spenders) like the National Restaurant Association. As a result, the federal minimum wage has remained stalled at $7.25 per hour, and the U.S. is the only developed country on earth that doesn't guarantee that workers can stay home sick without losing pay or their job.

Even worse, when cities and counties have tried to enact these laws in their communities, they've been thwarted by corporate-backed state legislators--most of whom are members of the American Legislative Exchange Council--passing "preemption" laws at the state level to crush local efforts to enact paid sick days or a higher minimum wage. (ALEC has also demanded that state legislators protect the "right" of corporate interests to anonymously influence elections.)

This big money politics means that elected officials are primarily responsive to the policy preferences of their financial supporters rather than average people. And, as Demos has described, this dynamic further hinders a truly multiracial democracy: major political donors, to both parties, are almost entirely white. Which means that policymakers are primarily responsive to the preferences of a rich, white donor class, and people of color and the poor have their voices marginalized, even as the country grows increasingly diverse.

Hope Is on the Horizon

Yet, there are flashes of hope.

This week, thousands of people across the country are taking to the streets on this fifth anniversary to raise their voices against Citizens United. Five million people have signed petitions calling for a constitutional amendment to reverse the decision. And 16 states and over 500 cities have passed resolutions calling for an amendment, including New York, Los Angeles, and Chicago, thanks to the work of Public Citizen, People for the American Way, Common Cause, Move to Amend, Communications Workers of America, American Sustainable Business Council and others

And last September, a majority of the U.S. Senate voted to advance a constitutional amendment to overturn Citizens United and restore the ability of Congress and states to put limits on electoral spending.

There is much more work to be done. But momentum--and popular support--is on the side of democracy.

Get more information and find an event near you at www.GetMoneyOutAction.org