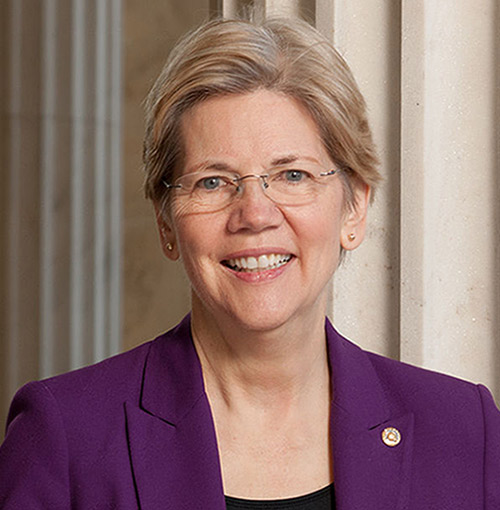 "We are here to fight back against a Supreme Court that says there is no difference between free speech and billions of dollars spent by the privileged few to swing elections and buy off legislators," Senator Elizabeth Warren (D-MA) said September 8, as the U.S. Senate kicked off a historic debate over a proposal to amend the constitution to limit the role of money in politics in the wake of Supreme Court decisions such as Citizens United.

"There are times when action is required to defend our great democracy against those who would see it perverted into one more rigged game where the rich and the powerful always win," she said. "This is the time to amend the constitution."

This week's vote marks a new milestone for the grassroots democracy movement that began in 2010 after a slim majority of U.S. Supreme Court justices voted to eviscerate legislatively-enacted limits on corporate political spending in the Citizens United decision -- and tied the hands of Congress to enact most new laws. The Court piled-on in the McCutcheon decision earlier this year, when it struck down limits on aggregate contribution limits.

Thanks to grassroots organizing and campaigning by Public Citizen, Common Cause, People for the American Way, and many others, elected officials in Washington, DC have responded.

"Because the Supreme Court based its rulings on a flawed interpretation of the First Amendment, a statutory fix alone will not suffice," said Senator Patrick Leahy (D-VT). Unless the court changes its mind or its membership, "only a constitutional amendment can overturn the Supreme Court's devastating campaign finance decisions."

The years after Citizens United have led to an astronomical increase in outside spending from just a handful of wealthy donors. More than $300 million in undisclosed "dark money" was spent in 2012, and secret electoral spending could top $1 billion by the end of 2014.

Before the vote, Sen. Bernie Sanders (I-VT) put the problem succinctly: “The major issue of our time is whether the United States of America retains its democratic foundation or whether we devolve into an oligarchic form of society where a handful of billionaires are able to control our political process by spending hundreds of millions of dollars to elect candidates who represent their interests.”

In 2012, just 32 donors gave more to Super PACs than 3.7 million Americans of average means who gave under $200 to Romney or Obama.

"When 32 people can outspend 3.7 million citizens, our democracy is in real danger," said Warren from the floor.

Issue Moves Voters and Has Widespread Support from Grassroots Republicans

Support for a democracy amendment has backing from almost half of the Senate, plus 16 states and over 500 cities that have passed resolutions calling for an amendment, including New York, Los Angeles, and Chicago. Over 3 million people have signed petitions calling for overturning Citizens United, and polls show overwhelming support for an amendment from across the political spectrum.

In Congress, support for an amendment splits along party lines, with most Democrats supporting the measure and most Republicans opposing it.

Yet the Republican base splits with leadership: when provided with a short description of the amendment, Republican voters support it by a roughly 2-to-1 margin, and widely reject arguments against the amendment, according to a recent Democracy Corps poll conducted by both Republican and Democratic polling firms.

The Democracy Corps survey found "overwhelming cross-partisan support (73 percent) for a constitutional amendment to overturn Citizens United that can translate into added support for Democratic candidates who support the amendment and damage Republicans who oppose it.” Plus, the polling shows the issue moves voters including that critical independent vote, a fact that may now be sinking in with Republican incumbents facing challengers this fall.

Past versions of amendments to limit money in politics attracted support from Republicans -- including Mitch McConnell (R-Ky), who now opposes any campaign finance limits, including disclosure requirements. McConnell is working hard now to make sure his caucus does not deliver any surprises.

Robert Weissman of Public Citizen noted: "Even if the amendment does not succeed in crossing this threshold, it will receive well over majority support, an outcome unfathomable just a few years ago. The momentum of history is on the side of common sense, on the side of restoring a government of, by and for the people – and the day is not long off not just when the Senate will pass the Democracy for All Amendment, but when it will be enacted as the 28th Amendment to the U.S. Constitution."

"The consequence of the Court's decisions is that a small, tiny minority of very wealthy individuals and special interests are drowning out the voices of hardworking Americans and skewing the electoral process," said Senator Patrick Leahy (D-VT).

It has led to a system where the policy preferences of an elite donor class are prioritized, and the preferences of the vast majority of Americans are ignored, according to a recent study from Demos.

For example, at least three-quarters of Americans back a minimum wage increase yet Congress has been unable to pass the measure, thanks in no small part to deep-pocketed interests like the National Restaurant Association exerting disproportionate political influence. The years after Citizens United showed a marked increase in political spending by fossil fuel interests like the Koch brothers -- and with it, a marked decline in legislators' willingness to put forward solutions on climate change, as Common Cause has noted.

And, the anarchic post-Citizens United electoral landscape has led politicians, such as Wisconsin's Scott Walker and dark money groups such as Wisconsin Club for Growth, to argue that the campaign finance laws that remain on the books no longer apply.

U.S. Senator Bernie Sanders will be in Wisconsin this weekend to discuss the historic debate at the annual Fighting Bob Fest, September 13th in Baraboo, find out more here.