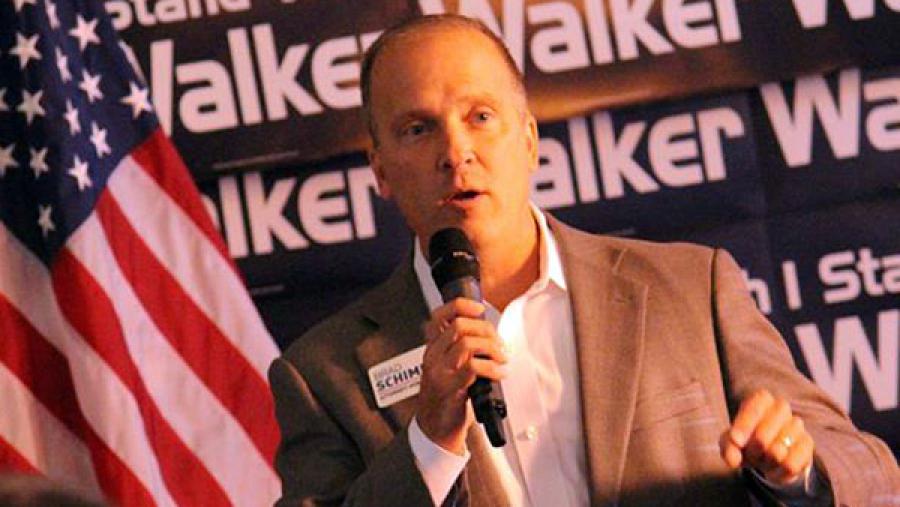 Republican attorney general candidate Brad Schimel has taken some heat when it comes to his firm conviction that a prosecutor's job is to defend the laws on the books, whether that be a gay marriage ban or an old time interracial marriage ban. But when it comes to Wisconsin's John Doe statute, which has been successfully used to convict both Democrats and Republicans of criminal corruption in office, he is ready to make some changes.

Schimel spoke at length with the Milwaukee Journal Sentinel editorial board recently and suggested that he would work to change Wisconsin's John Doe statute to give politicians more protections than average citizens. Wisconsin's John Doe process is similar to that of a grand jury, but the legal proceedings take place behind closed doors in front of a judge, and a strict gag order is in place to prevent those involved from talking to the press.

"There is a crisis in confidence," about the John Doe statute which is being used in an investigation of potentially illegal campaign coordination between so-called independent expenditure groups and the Walker campaign. "It works well when you're investigating a drug conspiracy, or a murder, a missing person... the problem is when it is used to investigate political problems, it gets political," Schimel told the Journal Sentinel.

"It's supposed to be a secret investigation, but with the John Doe that has caused all the attention in Milwaukee there have been leaks and that has contributed to the view that it is a witch hunt," he continued.

Schimel is echoing the claims of Wisconsin Club for Growth director Eric O'Keefe and his supporters who claim that the group is the target of a political witch hunt by Milwaukee District Attorney John Chisholm and special prosecutor Francis Schmitz. As CMD reported, Wisconsin Club for Growth spent $9 million in undisclosed funds during the recalls and funneled millions more to other groups defending GOP candidates. In an unprecedented move for a Wisconsin governor, Walker raised millions for Wisconsin Club for Growth during the recalls, and prosecutors allege that the Club may have coordinated their expenditures with his campaign in violation of Wisconsin's longstanding campaign finance law, enacted after the Watergate scandal.

O'Keefe is so angry about the investigation he has launched a slew of lawsuits against prosecutors and the nonpartisan state elections board, and has even likened the proceedings to rape, an analogy that drew condemnation from the left and the right.

The facts are these: The John Doe was approved by a vote of the bipartisan panel of retired judges, appointed by the governor, approved by a Senate Committee, that leads the Wisconsin elections board. It was approved by a group of both Republican and Democratic district attorneys in five counties. To avoid the incessant charges of partisanship that accompanied his last successful John Doe, which resulted in the convictions of six of Walker's staff and associates, Chisholm requested that the judge appoint a special prosecutor. The man who got the job was Francis Schmitz, a retired U.S. Army Colonel and an experienced federal prosecutor, who not only voted for Walker in the recall election, but also investigated threats against Walker in his role as Assistant U.S. Attorney at the U.S. Department of Justice during the recall.

As for leaks, O'Keefe himself is leaker-in-chief, defying the John Doe secrecy order in order to complain to the Wall Street Journal about the case and frame the criminal investigation as a partisan witch hunt and a violation of the first amendment.

But these facts have not quieted the howls of outrage from the right-wing media and the cascading lawsuits by O'Keefe, a die-hard ideologue with a long-standing relationship to the billionaire industrialist Koch brothers going back to the 1980s. One of the Kochs' funding vehicles, the Center to Protect Patent Rights, bankrolled Wisconsin Club for Growth during the recalls. That same group was fined by the state of California for a similar secret money shell game. And Schimel himself has been a beneficiary of Koch funds, receiving $5,000 from Koch Industries in August.

Federal Judge Rudolph Randa, who is the only Wisconsin judge to regularly attend Koch-funded junkets, sided with O'Keefe and the investigation is on hold for now, but no one in the state thinks the case is over as legal proceedings are moving forward in multiple venues.

Protecting the Political Class from Justice

When asked how he would reform the John Doe law, Schimel cited a law passed by politicians to protect politicians in the middle of an investigation.

In an effort to put an end to state lawmakers doing political work on the public dime, Madison's Democratic district attorney Brian Blanchard began a John Doe prosecution of the capitol's Republican and Democratic leaders in 2002. Over some years, he secured multiple felony convictions of leaders of both political parties, in an investigation dubbed "the caucus scandal."

While Democratic Senator Chuck Chvala pled guilty and ended up serving time in work release and Democratic Senator Brian Burke pled guilty and served time under house arrest, Republican House Speaker Scott Jensen, initially convicted of three felony counts and a misdemeanor, dodged and delayed. In 2007, Jensen was able to change the venue for his proceeding when the legislature passed special protections for politicians allowing politicians charged with campaign violations to have their cases tried in the county of their residence. When Jensen moved his case to conservative Waukesha County, he encountered a district attorney more to his liking -- Brad Schimel.

In 2010, Jensen reached a plea agreement with Schimel, where he avoided all jail time and paid just a $5,000 fine and lawyers' fees. While Democrats Burke and Chvala served their time under a Democratic DA, Jensen got off under a Republican one. Now, Schimel says we should apply that lesson to the John Doe, giving politicians even more latitude to control their own prosecutions.

Common Cause Director Jay Heck watched the caucus scandal unfold over many years and suggests that Schimel's alleged "crisis in confidence" over the John Doe process, following investigations into possible criminal wrongdoing by Scott Walker and people around him, is "selective and partisan."

"Did he think that the John Doe investigations of over a decade ago that criminally charged with felonies Democratic State Senators Brian Burke and Chuck Chvala were 'troubling?' If so, he hasn't said so. And after a jury, in 2006, convicted former Republican Assembly Speaker Scott Jensen of felony misconduct in public office but the verdict was set aside on a technicality, Schimel had no problem negotiating a gentle plea agreement with Jensen, after the new trial was moved to Waukesha County, absolving Jensen of the felony charges and jail time. That deal engendered a genuine 'crisis of confidence' for Wisconsin citizens that politicians would hence forward not be treated with the same of degree of justice that citizens themselves could expect. Politicians would receive a better deal," Heck told CMD.

And the selective prosecutions continue. Last year, Schimel decided not prosecute an attorney who admitted deleting files from the computer of Walker aide Darlene Wink who was under investigation in the first John Doe. The files concerned the political activities of Wink, who was convicted of doing campaign work on the public dime while Walker was Milwaukee County Executive. The lawyer destroyed evidence in the midst of a criminal investigation, and lied about it, yet the lawyer was merely instructed by Schimel to write a mea culpa to the state agency that oversees the conduct of lawyers.

The John Doe may need reforms and more transparency needs to be brought to the process when campaign finance law and other issues of public importance are being ruled upon behind closed doors, but a two-tier system of justice is not the way to go.

As Heck put it: "The public has the right to expect a vigorous, non-partisan investigation and resolution that is at least as severe -- and ought to be more so -- than whatever penalty mere citizens are subjected to. Certainly we ought not to accept special and more lenient consideration for misdeeds committed by an elite political class."