Walker Solicited Funds for Outside Group to Win Recalls 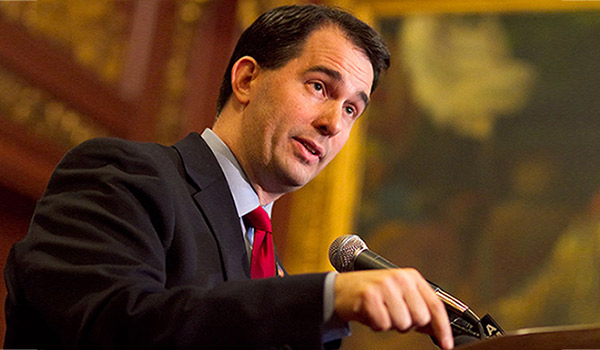 "Unprecedented." That is the word used by Wisconsin Common Cause director Jay Heck as he reflects on the breaking news that Governor Scott Walker actively solicited funds for Wisconsin Club for Growth (WCFG) to be used in the 2012 Wisconsin recall elections. The group amassed some $12 million, according to court records, and used those funds in half a dozen recall races held in June of 2012.

"I can't remember another governor ever engaging in this type of behavior in the state," said Heck.

The only precedent he could recall involved Wisconsin State Senator Chuck Chvala. In 2002, Democratic Senate leader, Chvala, and Republican House leader, Scott Jensen, were both charged with multiple felony counts of illegal campaign financing and abuse of office.

Both engaged in a variety of prohibited behavior, but prosecutors charged that Chvala raised funds for a phony “issue ad” group called “Independent Citizens for Democracy” in order to avoid disclosure and contribution limits enacted in Wisconsin in 1977 in the wake of the Watergate scandal.

Initially charged with 19 felony counts, Chvala pled to two felonies and was sentenced to jail time, later reduced. The whole episode was known throughout the state as “Caucus Scandal” and former legislator and then Milwaukee County Executive Scott Walker would have followed it closely.

Now Governor Walker and his campaign team have been accused of engaging in similar behavior.

New documents reveal for the first time the key details of the ongoing “John Doe” criminal investigation into possible illegal coordination between the Walker campaign and outside “issue ad” groups during the 2012 recalls.

At the time, the state GOP faced the possible recall of the governor and lieutenant governor was well as an indeterminate number of state senators. It has long been known that Scott Walker’s chief strategist for his recall campaign, RJ Johnson, also worked for WCFG. The new documents detail charges from prosecutors that Johnson was “essentially coordinating the campaign activities of both entities” while Walker raised money for his own recall “and simultaneously personally raised funds for WiCFG.”

"The Governor is encouraging all to invest in the Wisconsin Club for Growth," said an April 28, 2011, email from Kate Doner to RJ Johnson. “[H]e wants all the issue advocacy efforts run thru one group to ensure correct messaging," she wrote. "Wisconsin Club for Growth can accept corporate and personal donations without limitations and no donors disclosure."

Another email from Doner to RJ Johnson, and other campaign leaders suggests ways for Walker to raise funds for WCFG “Take Koch’s money,” a reference to Charles G. and David H. Koch, the right-wing industrialists who were already supporting Walker through their Americans for Prosperity issue ad group. It also directed Walker to “get on a plane to Vegas and sit down with Sheldon Adelson. Ask for $1 million now. Corporations. Go heavy after them to give.” Another email to Walker related to a scheduled meeting with a donor says “this meeting is for WiCFG Funds.”

State prosecutors detail instance after instance of Walker meeting with high dollar donors and a check being received shortly afterwards by WCFG. For instance, Walker met with a representative from SAC Capital Advisors and a month later $1 million was deposited by CEO Stephen Cohen. SAC pled guilty to federal charges of insider trading this year.

WCFG then funneled the funds to a dozen other groups, including to cite only one example, $2.5 million to Wisconsin Manufacturers and Commerce. In April of 2012, WMC unleashed a $2 million ad buy in support of Walker and engaged in other campaign activities.

While the Wall Street Journal would like to dismiss it as much ado about nothing, Wisconsin law is clear. The state elections board, which under Wisconsin law is tasked with interpreting and applying the state's campaign finance statutes, has long advised candidates and the public that coordinated issue ads may be construed as a contribution under Wisconsin law.

The newly released John Doe documents explains why: "coordination with a candidate or candidate committee transforms purportedly independent disbursements and even true issue ads into in-kind monetary contributions to the candidate" that must be disclosed under Wisconsin’s campaign finance system. The intent of the law it to allow citizens to know who is financing political campaigns so they can decide if deep pocket donations cross the line into pay to play corruption.

Indeed, pay-to-play allegations are also part of the prosecutor's case. WCFG raised some $12 million during this time period. Part of those funds came from one firm, Gogebic Taconite, a firm whose efforts to build the state’s largest open-pit iron ore mine, were stuck in the legislature. Only if Republicans held the Senate, and gained one or two more friendly votes, could the mine could be authorized. The recall elections in June plus the November elections led to the swing needed, and Walker signed the mining bill into law in March of 2013.

Without John Doe criminal investigation that led to the examination of WCFG’s secret bank account, the $700,000 secret gift from Gogebic would be totally unknown and unknowable. “The only protection the citizens of the state have against quid pro quo corruption is disclosure,” says Heck.

When confronted by the Milwaukee Journal Sentinel and asked directly if he knew about the $700,000 Walker’s response was a nondenial denial: "Not to my knowledge." Asked if it the money was pay to play, Walker responded: "That's a ridiculous argument."

Although the right-wing portrays the entire prosecution as a partisan “witch hunt” the newly released documents reveal for the first time that the special prosecutor in the case, Francis Schmitz, is working on a contract for the state's enforcer of election law, the nonpartisan Government Accountability Board, who is itself governed by a board of retired judges. Schmitz is an experienced federal prosecutor, who not only voted for Walker in the recall election, but also investigated threats against Walker in his role as Assistant U.S. attorney at the U.S. Department of Justice during the recall.

Schmitz has been working with Dean Nickel, the former head of the state Department of Justice Public Integrity Unit who investigated the issue for the elections board. “Because Wisconsin Club for Growth’s fundraising and expenditures were being coordinated with Scott Walker’s agents at the time of Gogebic’s donation, there is certainly an appearance of corruption in light of the resulting legislation from which it benefited,” wrote Nickel.

While it may infuriate the Wall Street Journal, the Government Accountability Board and state prosecutors have put forward a strong legal case and a compelling series of facts that demand investigation. Failure to do so penalizes the groups that have played by the rules and advantages groups willing to flout Wisconsin law. The elections' board's central involvment in the case explains why WCFG has been trying to stop it from spending any money in the case and why GOP legislators proposed getting rid of the nonpartisan judges and reinstituting the old system of partisan appointees.