Climate change is real and is impacting every corner of the nation right now, says a report released yesterday by the Obama administration. 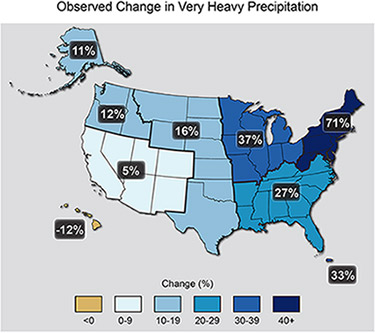 The federal government’s National Climate Assessment and Development Advisory Committee (NCADAC) released the final version of its 2014 climate assessment, examining the nationwide impact of global warming and the progress made in countering it.

The report documents that average temperatures in the United States have increased by about 1.5°F since 1895. More than 80 percent of this increase has occurred since 1980. The most recent decade was the nation’s hottest on record.

The report concludes that if greenhouse gases like carbon dioxide and methane continue to escalate at this pace, the warming could conceivably exceed a stunning 10 degrees by the end of this century.

President Obama took to the airwaves. Speaking to Al Roker on the “Today” show this morning Obama said: “This is not some distant problem of the future. This is a problem that is affecting Americans right now. Whether it means increased flooding, greater vulnerability to drought, more severe wildfires — all these things are having an impact on Americans as we speak.”

While the conclusion is not surprising as climate change is making itself felt across the country, the reminder is very timely as the Obama administration is preparing to roll out its most ambitious public policy since the Affordable Care Act.

By June 1, the Environmental Protection Agency (EPA) is slated to release proposed emissions standards for existing power plants. Over a number of years the rules will greatly reduce the emissions, benefiting human health and helping to address global warming.

New Emissions Rules for Power Plants to Be Released

The U.S. Supreme Court ruled in 2007 that if greenhouse gases were determined to endanger public health or welfare, the EPA would be required to regulate their emissions in accordance with the Clean Air Act.

While the Bush administration slow-walked its obligations under the law and the court ruling, the EPA issued its endangerment findings in 2009 after Obama was elected. Based on an evaluation of the best domestic and international science, the EPA determined that greenhouse gases meet the definition of "air pollutants," and moved to regulate their emissions from cars and power plants. Vehicle emissions were regulated via new fuel efficiency standards requiring cars and light trucks to boost fuel efficiency over a number of years

Now it’s time for action on power plants, especially coal-fired power plants. The EPA contends that “power plants are the largest concentrated source of emissions in the United States, together accounting for roughly one-third of all domestic greenhouse gas emissions. Currently, nearly a dozen states have already implemented or are implementing their own market-based programs to reduce carbon pollution. In addition, more than 25 states have set energy efficiency targets, and more than 35 have set renewable energy targets. While the United States has limits in place for arsenic, mercury and lead pollution that power plants can emit, currently, there are no national limits on the amount of carbon pollution new power plants can emit.”

After receiving some 2.5 million public comments, the EPA will issue new rules in June 2014, that will require existing power plants to implement new technology to dramatically cut emissions over a number of years. Rules on new power plants are also in the works, with a comment period open until May 9.

Push Back on Emission Standards Likely to Be Extreme

The White House report is the latest in a series documenting the impacts of climate change and the need for urgent action. Climate change deniers, whose strategy is premised on the American people closing their eyes to the dramatic changes taking place in their own communities, were at the ready.

“The report falsely asserts that global warming is causing more extreme weather events, more droughts, more record high temperatures, more wildfires, warmer winters, etc., when each and every one of these false assertions is contradicted by objective, verifiable evidence,” said James Taylor of the Heartland Institute. Heartland is known for its billboards comparing climate scientists to the Unabomber Ted Kaczynski.

The American Legislative Exchange Council (ALEC) is also on the attack with a new effort to coordinate state attorneys general to sue to prevent the emissions standards from going into effect and continuing to advance a raft of bills to facilitate the fossil fuel industry and roll back renewables, as CMD’s Nick Surgey details. Peabody Energy, Koch Industries, and Exxon Mobile all play powerful rules within the organization, so it is not surprising that of ALEC's 25 "energy" model bills, 24 serve fossil fuel interests and undermine clean energy, says Greenpeace.

Groups like David Koch's Americans for Prosperity (AFP) are waiting in the wings, no doubt prepping multimillion dollar ad buys in the 2014 election cycle claiming that the new rules will kill jobs and destroy the economy. AFP’s Tim Phillips told the New York Times that the group’s sustained opposition to the Affordable Care Act was mere prelude to the fight over climate change.

“We have a broader cautionary tale,” said Phillips. “The president’s out there touting billions of dollars on climate change. We want Americans to think about what they promised with the last social welfare boondoggle and look at what the actual result is.”

AFP has already targeted candidates like Alaska's Mark Begich for his alleged support for a carbon tax even though, no carbon tax bill has been considered by Congress. By moving forward with the emissions rules, President Obama is not only addressing one of the most pressing issues of our time, but he is following the law laid down by the federal courts.

Can the democrats take the heat?