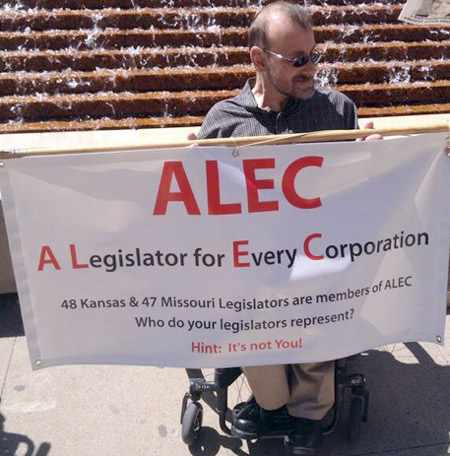 Today in Kansas City, Missouri, the American Legislative Exchange Council is bringing your state legislators to a closed-door meeting with corporate lobbyists to ghostwrite "model" laws to bring to your state.

As usual, ALEC's latest conference will be painted with patriotic rhetoric and all of the typical buzzwords: "free markets," "liberty," "Jeffersonian," "Prosperity,"...you get the gist. But in typical political & public relations fashion, these words are a feeble shell obscuring an anti-populist, Big Business lobbying campaign.

The American Legislative Exchange Council doesn't care about free markets. I know it says it does, and I know they're Tweeting with the #FreeMarkets hashtag today, but ALEC doesn't honor the concept by any means. This is easily proven by the extremely narrow range ALEC's own pay-to-pollute policies.

This may interest ALEC's friends who actually do care about free markets, since ALEC actively works against the concept when its member companies demand so. Case in point: tea party and free market groups like Tell Utilities Solar won't be Killed (TUSK) are pushing back on ALEC and its monopolistic utility members for attempting to impose fees on distributed solar electricity generation.

ALEC considers people installing solar panels on their rooftops and feeding extra electricity into the grid to be "freeriders," and will host a luncheon today to discuss how ALEC legislators can help utilities and the Koch brothers make small-scale solar electricity generation more costly.

Greenpeace just confirmed that at least six utility companies quietly dumped ALEC in recent years. These utilities made no promise to maintain disassociation but responded with a rhetorical defense of their commitments to climate and sustainability initiatives, which is completely counter to ALEC's ongoing work.

ALEC has many bills in a few narrow categories that all expand power and government resources for fossil fuel and nuclear companies, complimented by model bills to stifle competition from renewable energy and fuel interests. How many of these ALEC bills promote renewable energy or renewable fuels?

How many ALEC bills propose repeals of coal, oil, gas or nuclear subsidies?

The closest ALEC comes is a single model bill to exempt some energy efficient appliances from state & local sales and use tax focuses on consumer-level activity rather than broad systemic issues of infrastructure, pollution reduction, 0r science-based climate policy. This means 24 of ALEC's 25 "energy" bills are handouts to polluters.

Here's a rundown of ALEC's dirty energy bills, which ALEC's staff routinely characterize in order to sell these bad ideas to the American public. Check for yourself, and call out the only thing ALEC has ever recycled: dishonesty.

ALEC bills Promoting, Protecting or Expanding the Use of Fossil Fuel & Nuclear Fuels: 16

ALEC bills Promoting, Protecting or Expanding the Use of Renewable Energy & Renewable Fuels: 0

ALEC bills to Undermine Clean Energy Incentives or Development and promote use of Fossil Fuel and Nuclear Energy: 8

The bills listed above are only ALEC's energy model policies--ALEC's Energy, Environment and Agriculture task force has dozens of other model policies that attack environmental safeguards designed to keep our air and water cleaner than polluting companies would bother to do themselves without enforcement.

ALEC ignores the $478.8 billion that oil companies have received in government subsidies since 1918, compared to $67.6 for the renewable energy sector since 1979 (in 2013 dollars). Nor does ALEC attempt to grapple with the massive costs that oil, gas and coal companies impose on society like air and water pollution, freshwater depletion, and global climate change, which itself creates and aggregates a wide range of costs that people are already feeling.

Somehow, I doubt they checked out the solar panels on the roof of the Marriott, where the ALEC conference is being hosted.

The united attacks on clean energy from dirty energy companies, ALEC and the State Policy Network has been creeping its way into the national consciousness, thanks to watchdogs and journalists who are keen on their secretive activities to keep the United States' energy portfolio stuck in the 20th Century. Check out recent reporting in the New York Times, the Washington Post, the Los Angeles Times, MSNBC's Rachel Maddow (note PolitiFact's clarifications) and Chris Hayes, The Guardian, and Huffington Post and the New Republic.

You can look to groups like Greenpeace, NRDC, the Energy and Policy Institute, the Union of Concerned Scientists, and the Center for Media and Democracy's PR Watch for an ongoing window in to ALEC's lobbying on behalf of polluters.

Connor Gibson does research as part of Greenpeace's Investigations team. He focuses on polluting industries and their front groups, PR firms and political operatives.