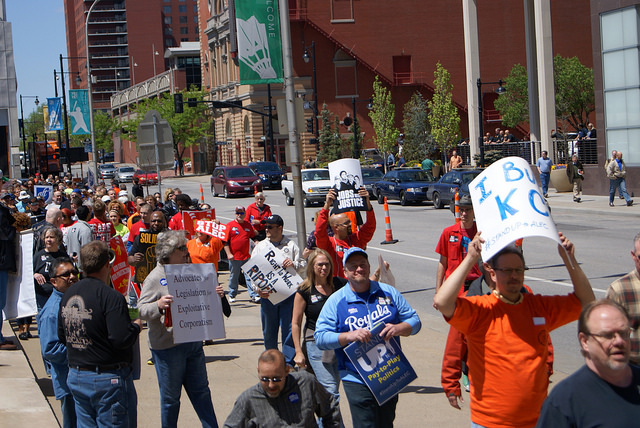 Yet Kansas City hardly gave ALEC a warm welcome. As ALEC members convened at the swank downtown Marriott, the Kansas City Star editorial board published a scathing piece calling out the group's "anti-worker, pro-business campaign" and the "Republican legislators in Missouri and Kansas [who] have been dancing the ALEC tune for years now."

Around 400 people gathered outside the ALEC meeting to raise their voices against the corporate bill mill. Demonstrators held hand-made signs reading "Missouri does not need ALEC" and "Money + Influence = Bribery."

"We are taking billion-dollar corporations head-on," he said, but "the fight for democracy is alive and well."

Amidst increasing public scrutiny of ALEC, the group has tried to sneak back into the shadows. ALEC's efforts to evade open records laws and to boot reporters from meetings have been well-documented, but at this meeting ALEC even tried to hide the name of its corporate meeting sponsors.

For years, ALEC's meeting agendas have prominently featured the names and logos of the corporations sponsoring the event, which made it easy for the press to report on who was footing the bill. At this year's meeting, though, ALEC stripped its agendas of all corporate logos, and took down placards near the registration table listing the meeting's corporate sponsors.

Although it has become more difficult from the outside to ascertain which corporate interests are backing ALEC, the identities of those bankrolling ALEC events were certainly made known to the politicians on the inside.

Hundreds of politicians and corporate lobbyists mingled and munched on baked brie (topped with a raspberry glaze) and Kansas City barbecue (served on the hotel's china). Attendees sipped on free liquor, wine and beer (Anheuser-Busch, of course). After the reception, legislators jetted off to an undisclosed, invite-only event. 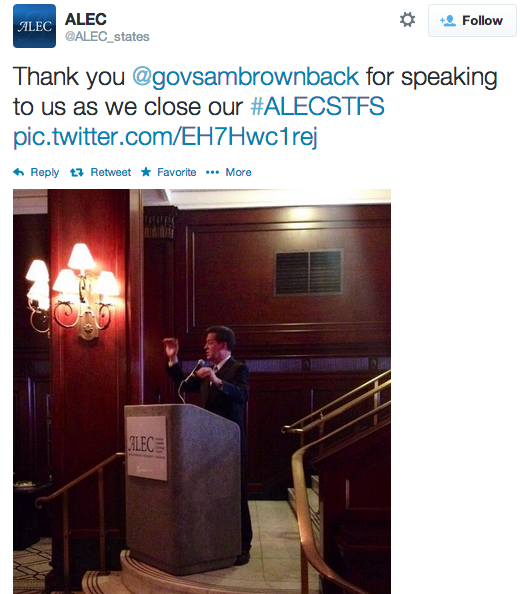 The "Chairman" level sponsor of the cocktail reception was a book, the "Nature and Causes of Wealth of States," which according to its description "explains why eliminating or lowering tax burdens at the state level leads to economic growth and wealth creation." It was authored by ALEC "scholars" Arthur B. Laffer and Stephen Moore, with title credits also given to Missouri oligarch Rex A. Sinquefield and his right-hand man Travis H. Brown.

As the Center for Media and Democracy and Progress Missouri have documented, Sinquefield has poured at least $31.5 million into Missouri politics since 2008 in an effort to impose steep income tax cuts and privatized schools on the state; in 2012 he gave $100,000 to Missouri House Speaker and former ALEC State Chair, Tim Jones, despite Jones running unopposed.

The cuts that Brownback enacted in 2012 and 2013 were among the most drastic of any state, ever.

Brownback promised that slashing taxes would result in economic growth and job creation. Sinquefield predicted that businesses would flock across the Missouri border into Kansas. Yet this has not happened: since the cuts were enacted, the economy has grown more slowly in Kansas than in Missouri, where Democratic Governor Jay Nixon vetoed similar tax cuts. And Kansas is faced with big deficits, cuts to education and public programs, and raids to the highway fund.

In an appearance not announced publicly, Brownback addressed the ALEC crowd Friday evening. For years, ALEC has announced its high-profile speakers and keynotes -- yet said nothing about Brownback's appearance until it sent a twitter pic after his presentation.

The timing was inopportune. The same day as the ALEC meeting, the front-page headlines from newspapers across Kansas and Missouri read: "Moody's Downgrades Kansas' Credit Rating, Citing Sluggish Economy and Risky Tax Plan."