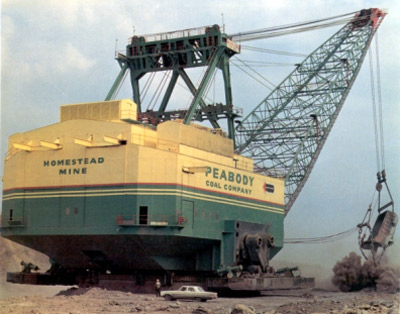 An internal ALEC document provided to the Center for Media and Democracy (CMD), shows that a Peabody Energy lobbyist provided ALEC legislators with a presentation on how to get more cash from corporations like Peabody to attend ALEC conferences. Peabody, a long time member of ALEC, is a frequent presenter at ALEC events and sponsor of several items of ALEC "model" legislation in recent years.

The presentation by Peabody lobbyist Wendy Lowe, recipient of the ALEC "State Chair of the Year" award in 2012, happened during a closed-door session for ALEC state chairs, during the organization's annual meeting in Chicago in August 2013, which Peabody supported as a $50,000 "Conference" level sponsor.

Part of the duty of the ALEC state chairs is to solicit funds from corporations for the ALEC "scholarship fund," which raises more than $600,000 per year and which enables legislators to travel for free to ALEC conferences, where they meet with lobbyists from corporations like Peabody Energy, Exxon Mobil and Koch Industries. Well-connected lobbyists like those of Peabody, enable ALEC legislators to tap into large funds, but the relationship is one that appears to benefit the lobbyists at least as much.

Peabody "Worst of the Worst" and ALEC

Peabody, the world's largest private sector coal company, was named as the number one "worst of the worst" polluting company for the planet by NewsWeek. It has given numerous presentations at ALEC conferences in recent years concerning the regulation of greenhouse gases. In particular, Peabody utilizes the platform offered by ALEC to address the perceived threat to its coal business from the courts, providing presentations to ALEC legislators on this topic in 2011 and 2012.

Peabody, concerned with tapping into the vast reserves of untapped fossil fuels under federal lands in the west, sponsored the ALEC "Resolution Requesting that the Federal Government Confer and Consult with the States on Management of Public Lands and Energy Resources" in December 2011, which passed the ALEC Energy, Environment and Agriculture Task Force unanimously.

The corporation's top lobbyist, Kelly Mader, is a member of the ALEC corporate "advisory council." Additionally, as a member of "ALEC's Wyoming Leadership team," Wendy Lowe of Peabody was praised in the May 2011 edition of ALEC's magazine, Inside ALEC. At an ALEC event in Wyoming that same year, Lowe reportedly "praised ALEC for creating a unique environment in which state legislators and private sector leaders can come together, share ideas, and cooperate in developing effective policy solutions." As evidence of the success of this partnership, according to Inside ALEC, the day after the event, "Wyoming Gov. Matt Mead signed Senate Joint Resolution 6, requesting the United States Congress to limit the excessive air quality regulations imposed by the Environmental Protection Agency (EPA)."

Within ALEC, every state has a legislator partnered with a lobbyist, who together act as state co-chairs to raise cash for the organization and promote the ALEC agenda through "model" legislation. Though ALEC does not publish a list of who the state chairs are, Peabody Energy representatives are the corporate co-chairs in at least two states, Wyoming and Missouri.

The gifts are hidden because any required disclosure by a legislator, describes the gift as being from ALEC, rather than from any particular lobbyist from whom the state chairs solicited the funds. As is described in the CMD report, "Buying Influence," which specifically examines the scheme, ALEC state chairs are sent detailed spreadsheets noting which corporations have paid into the fund, leaving legislators in no doubt as to who is paying for their trips, but leaving their constituents in the dark.

What little is known about which corporations pay into the fund is detailed in the CMD report, co-released with DBA Press and Common Cause in 2013. In the data obtained and released in the report, Peabody Energy was one of the top contributors to the fund.

Other internal documents from the same ALEC meeting in August were published by The Guardian in December 2013. These included a new draft job description for ALEC state chairs, described as a "loyalty pledge" by critics, which states that the legislators are "morally responsible for the health and wellbeing of this organization," and should therefore "put the interests of the organization first."

ALEC has since distanced itself from the language in the leaked agreement, although it is known that ALEC staff did present the document for board approval, but according to the meeting agenda obtained by CMD, another Peabody lobbyist at the meeting, Kelly Mader, advised those present on the "roles and responsibilities" of being an ALEC state chair. A document titled "Roles and Responsibilities" is also listed in the agenda, but it is not known what this contains, how it varies from the "job description" published by the Guardian, and if it is any better or worse than having a Peabody Energy lobbyist school legislators in their responsibilities to an organization like ALEC.

Peabody is not only a bad actor when it comes to climate, it has treated it's employees poorly as well. As CMD reported in August 2013, Peabody Energy and Arch Coal had spun off part of their operations in West Virginia in order to avoid "legacy liabilities" owed to retired workers: "a fancy word for the earned retirement pensions and health care obligations of the men and women who toiled in underground mines for decades building Peabody's wealth. The operations that were spun off were dubbed 'Patriot Coal,' a corporation that has sought to escape its obligations to miners through federal bankruptcy proceedings." Facing public and legal pressure, the Peabody/Patriot case has now been resolved with some payments to be made to fund its obligations.