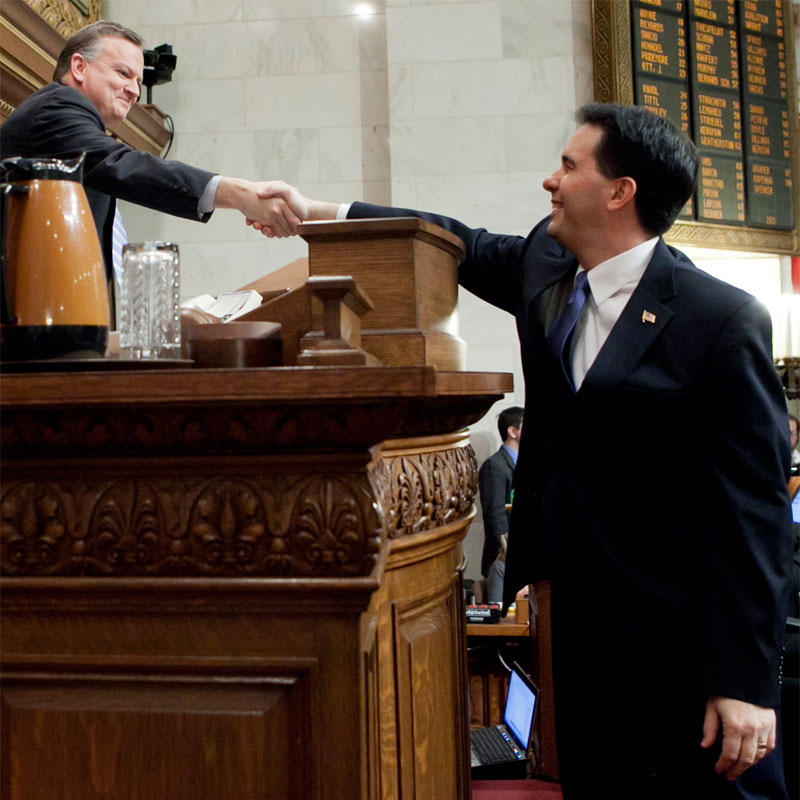 It's been a bad few weeks for Wisconsin Governor Scott Walker.

First, his former deputy chief of staff, Kelly Rindfleisch, released 28,000 pages of emails from her criminal corruption case revealing offensive and callous comments from Team Walker during the time he served as Milwaukee County Executive. While Walker called the emails "old news," one of his top lawyers quickly lost his job.

Now his Majority Leader in the State Assembly, the point man on his legislative agenda, is in hot water for alleged sexual harassment. His last Majority Leader, you will recall, lost a plum appointment when news broke that he had organized a $500,000 sweetheart deal for his former chief of staff and a Koch-tied apparatchik.

"The Least Surprising Headline Ever"

Assembly Majority Leader Bill Kramer, a stalwart of the American Legislative Exchange Council, has been accused of sexually harassing two women while in Washington, D.C. last week for a Wisconsin GOP fundraiser. The Milwaukee Journal Sentinel reported that the 49-year-old Republican lawmaker physically and verbally harassed a 33-year-old female lobbyist at the fundraising event and another woman on the plane back to Wisconsin.

Statements from the GOP leadership signal that the incidents were serious: "The alleged behavior is reprehensible and won't be tolerated," said Assembly Speaker Robin Vos. Conservative pundit, Charlie Sykes reported: "According to news reports and my own sources, Kramer's conduct last week went beyond tasteless jokes, and included physical contact that could be construed as sexual assault." One source told Sykes it was "the least surprising headline ever."

Kramer's office staff released a statement indicating that the boss was checking into rehab, but a little counseling may not be enough. This is not the first time that this type of allegation has been made about Kramer. Republican State Representative Chris Kapenga warned his caucus that Kramer was a loose cannon after he engaged in similar conduct at an ALEC meeting in Chicago last August.

Kramer is an ALEC pointman in the Wisconsin legislature. He supported Voter ID, telecom deregulation, anti-consumer tort legislation, the repeal of collective bargaining rights for state workers and more. He also supported radical restrictions on a woman's right to choose, including a state mandated ultrasound before terminating a pregnancy.

The cocky Kramer, who likes to use Wisconsin's new concealed carry law to reportedly carry a Glock semiautomatic onto the floor of the Assembly, will face a vote on Tuesday designed to strip him of his leadership position and ease him out of office.

Walker Asks: Judge Me by the People I Surround Myself With

In a recent interview in the American Thinker, Walker told America that he wants to be judged by the people he surrounds himself with: "Governors should be defined not just by what they do and say, but who they surround themselves with, making sure to have the smartest person for a particular task or to head a specific agency. They should be judged on that basis and who they take advice from."

When you take Walker up on his offer, a disturbing pattern emerges.

1) Walker's chief legal counsel at the Wisconsin Department of Transportation (DOT), John Schulze, was forced to resign last week after a sharp-eyed Daily Kos blogger dug through a cache of emails and spotted a phony press release written by Schulze and sent to some of Walker's top staff and associates. The profane press release proposes a fact finding mission to legalize prostitution in the state and includes references to ALEC meetings and oral sex. Jokester Schultz boasts: "I am one funny dude!"

The funny dude was let go on Tuesday.

2) Here is another "joke" a Walker underling sent to Rindfleisch: "This morning I went to sign my Dogs up for welfare. At first the lady said, 'Dogs are not eligible to draw welfare.' So I explained to her that my Dogs are mixed in color, unemployed, lazy, can't speak English and have no frigging clue who their Daddys are. They expect me to feed them, provide them with housing and medical care, and feel guilty because they are dogs. So she looked in her policy book to see what it takes to qualify. My Dogs get their first checks Friday."

"This is so true!" Rindfleisch tittered. Rindfleisch was hired by Walker as his deputy chief of staff even though she had been caught up in an earlier illegal fundraising scandal and given immunity for her testimony. In November 2012, jokester Rindfleisch was sentenced to six months in jail and three years of probation for campaign fundraising while on the public dime and felony misconduct in office.

3) After mental patient Cynthia Anczak died of complications related to malnourishment at a Milwaukee County mental health facility, the chief concern of Walker staff was how to keep it out of the news before the election: "Keep it buried until Nov. 2nd and then hopefully they settle," wrote the campaign manager Keith Gilkes to Rindfleisch.

"No one cares about crazy people," Rindfleish chirps in a separate email.

4) In December 2013, the Walker campaign fired its deputy finance director over racist tweets. Taylor Palmisano was let go after gems like this one were discovered: "I will choke that illegal mex cleaning in the library. Stop banging (expletive) chairs around and turn off your Walkman." This was after Palmisano penned a bizarre holiday fundraising note for Walker asking people to donate to the campaign rather than go Christmas shopping for their kids.

6) After all these snafus, not to mention the registered sex offender Walker invited on stage at the State of the Union, you would think Team Walker would be a tad more careful, but just days ago the campaign featured tweets from a young college student named David Hookstead. In November, Hookstead made national news after he wrote a piece suggesting some women "feel the need to exploit anything that may be rape for publicity."

7) Let's not forget Walker's former Majority Leader and ALEC State Chair Scott Suder. Walker plucked Suder out of the legislature to give him a big raise with an appointment to the Public Service Commission. Before he could cash in, it was revealed that Suder was behind a $500,000 grant to his former chief of staff and Koch chrony Luke Hilgemann. After a brouhaha, the grant was pulled and Suder lost the PSC post.

8) Timothy Russell, a Walker loyalist who reportedly set up Walker's secret email system in 2002, held eight positions in his county administration including deputy chief of staff. When he was charged with two felonies and one misdemeanor related to embezzlement of $21,000 veterans funds, he was running a county housing program he was unqualified to run. Russell was hired by Walker even after he ripped off the state in a prior job.

9) Russell's boyfriend, Brian Pierick, ran anonymous websites for Walker and did other volunteer work for the campaign before he was charged with two felonies, including a disturbing incident of child enticement.

10) Kevin Kavanaugh, appointed by Walker as a county veterans official, is serving time for stealing $11,000 from a veterans fund. Robbing vets is a veritable hobby for Team Walker.

11) Walker staffer Darlene Wink pleaded guilty to fundraising for Walker while on county time as part of a plea deal that she made with the prosecutors.

13) Lucky 13 goes to Brian Deschane. A young man with no qualifications and no college degree, but two drunk driving convictions, was offered a plum $80,000 a year appointment in the Walker administration, because he was the son of builder's association president and lobbyist Jerry Deschane.

Walker asked the state to judge him by the company he keeps.

UPDATE March 5, 2013: Kramer was stripped of his leadership post on March 4 as eyewitness reports of his behavior continued to emerge. Rep. Patricia Strachota was elected to replace him. Strachota is also an ALEC member.

Besides the clowns and rejects Walker surrounds himself with, the people of Wisconsin ought to be more concerned about Walker's agenda. If the Wisconsin Democrats cannot beat Scott Walker in 2014, they should be beaten with their own shoes. How can the Wisconsin Democrats not field a candidate to beat a governor attached to a floundering economy and awful record on jobs? How can Wisconsin Democrats not beat a governor who looks hell-bent on selling Wisconsin's public lands to places like China, which will impact farmers (e.g. more competition from outsiders), sportsmen (e.g. less land to use for hunting and fishing), and most of all, everyday Wisconsinites (e.g. more demand for grain and soybeans from China will push up food prices)? How can any Wisconsin Democrat not beat a governor whose economic policies are demonstrably reckless and misguided, and a governor who presides over something as poorly managed as W.E.D.C? How can any Democrat lose to the most incompetent man to hold the gubernatorial office in Wisconsin history? Don’t tell me about the Republicans' simple message or stupid voters or the Koch Brothers. This is the Wisconsin Democrats job to make their case to Wisconsin voters. You've been blessed with an opponent who makes Sarah Palin and Rick Perry look intelligent. Walker's major policies have been one disaster after another. Yet, here we are… Walker’s driving through one disastrous piece of legislation after another, and attempting to privatize things like the University of Wisconsin system, state-owned utilities, and the Wisconsin crime lab. The reason Walker’s in the Wisconsin Gubernatorial Mansion in the first place is because he and his cronies want it more than the Democrats. Campaigning and politicking is dirty business, and the Wisconsin GOP is willing to dive headfirst into the slop to get the prize, while Democrats are only willing to get in up to their knees and then complain that they shouldn't have to wallow around in the mud. It’s not that Walker and his ilk are playing chess. It’s more like Walker’s playing checkers for dummies and Wisconsin Democrats can’t get their testicles unglued from their thighs! Scott Walker is utterly incompetent, but think how much more incompetent you have to be to lose to him.