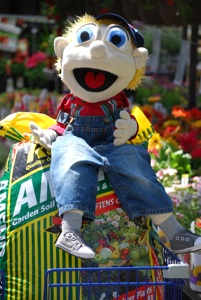 (This article has been corrected to reflect that the co-creator of the kids' gardening puppet is not employed by Kellogg Garden Products but that Kellogg has sponsored some of the puppet's gardening events.  In communications with the Center, the co-creator of the puppet, Lisa Ely, has shared her view that the puppet is an educational tool and not a marketing tool for Kellogg to reach families and kids interested in gardening. The puppet was created before Kellogg began sponsoring some of its events at gardening stores that market Kellogg's sludge-based products.)

A new puppet's in town! His name is Karden, and according to his PR, he shows kids how much fun gardening can be. What parents and teachers aren't told is that he is actually also being used as a marketing tool for sewage sludge merchant Kellogg Garden Products.

Books featuring Karden, available at common bookstores, and an "Idea Factory" website devoted to him, are full of gardening activities for parents and teachers to do with their kids. Karden throws free kids' gardening events at bookstores and hardware stores.

Lisa Ely, one of the two creators of the character, is listed on a gardening website about "Karden's Corner" as "an award-winning television producer and owner of one the newest production companies in Los Angeles focused on documentary television." But while she has, indeed, produced such reality TV shows as CBS's "The Amazing Race," Discovery Channel's "Verminators," and TLC's "America's Ugliest," Ely's Facebook page lists no production company. As of November 9, 2011, her home page listed Kellogg as her employer:

(Ely has since removed this reference on her Facebook page and contacted the Center to state that she was "never employed by Kellogg."  She stated that the reference to her working at Kellogg must have have been added by someone else.  She stated that Kellogg has sponsored some gardening events of Karden, including a grade school garden competition and that such "sponsorship was a business transaction," but not one that involved her acting as an employee of Kellogg.) 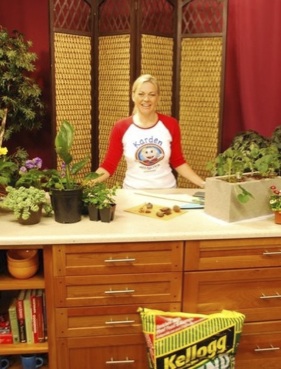 While Ely was busy producing TV shows about what creepy-crawlies are "grossest," and featuring "gnarly infestations," Kellogg, was busy buying composted, concentrated sewage sludge from municipalities like Los Angeles, via its "Inland Empire Regional Composting Authority," and repackaging and greenwashing it as "compost." Kellogg has been in the sludge slinging business since 1925.

Sewage sludge contains toxic and hazardous materials, including large numbers of endocrine disruptors and several heavy metals, along with carcinogenic flame retardants, pharmaceutical residues, phthalates, industrial solvents, resistant pathogens, and perfluorinated compounds, which can bioaccumulate in gardens and in the human body.

"If the ingredients aren't listed, you may want to look at buying a different bag."

One of the suggested kids' activities in Karden's "Idea Factory" is choosing bagged potting soil. Karden, who's supposed to have just toured "Kellogg's soil factory," says he "learned that when shopping for potting soil, the most important thing you can do is look for a bag that lists quality ingredients and gives a satisfaction guarantee. The ingredients should be listed on the bags of soil you're buying, almost like the food you buy from the grocery store. If the ingredients aren't listed, you may want to look at buying a different bag." 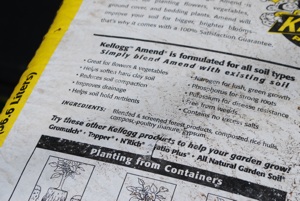 Although Kellogg's "Amend" product, as pictured on the kids' activity page, sports a list of ingredients, it does not list sewage sludge or even the sludge industry's Orwellian PR euphemism, "biosolids." It does list "compost."

One must look on Kellogg's website, rather than its packages, to find what is meant by "compost":

"Compost from biosolids ... comes from wastewater treatment plants in different communities throughout the U.S. (Our compost comes mostly from the Inland Empire.) You might find it in our Amend, Gromulch, or Topper products -- depending on where they're bagged. And this type of compost is always in bags of Nitrohumus."

What parent, with kids in tow, would put a bag of fertilizer that says it contains something as innocuous-sounding as "compost" back on the shelf until they can go home and look up Kellogg's definition tucked away on the web? 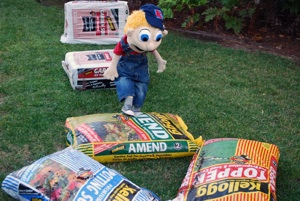 Another activity in Karden's "Idea Factory" is setting up and playing in an "obstacle course" made of Kellogg products, including Amend and Topper, made from industrial and human sewage sludge.

Kellogg's contribution came in the form of -- what else? -- a "soil donation" to the school.

As we've reported, Kellogg has contributed the products it sells, many of which contain "biosolids," to at least thirteen schools in the Los Angeles area and to a rooftop community garden on skid row.

As for Karden, you may find him at a garden store near you, greenwashing the idea of kids gardening in sewage sludge. Parents may want to beware of Kellogg's puppets bearing "gifts" made of contaminated industrial waste.

More information that seems less emotional and reactionary: http://www.epa.gov/agriculture/tfer.html From YOUR link: Dioxins. The EPA, in 1999, had originally proposed a TEQ limit of 300 parts per trillion (ppt or pg/g) in biosolids applied to land, which is well above the means of 32 or 48 ppt detected in recent biosolids surveys. Subsequent to the 1999 proposal, the EPA made a final decision not to regulate dioxins in land-applied biosolids. After five years of study, which included outside peer review, the Agency determined that dioxins from this source do not pose a significant risk to human health or the environment *******
Dear Sir or Madam: I take exception to the notion that highlighting the dioxin in Kellogg's sludge products is "reactionary." First of all, the EPA has continued to duck dealing with the sludge problem. It has not updated the substances it requires sludge to be tested for literally for decades. Second, and more importantly, it is part of the greenwashing problem. Let's take a closer look: in response to the serious consequences of metals and other contaminants from sewage sludge, it works to protect the waterways that sludge used to be dumped into. Basically, the cleaner the water coming out of the municipal sewage plants, the dirtier the sludge. What's left is the concentrate of all of the chemicals flushed down the drains by industries and humans. And then, instead of requiring that this toxic sludge be contained, it decides to allow it to be heat treated and off-loaded onto fields and farms across the country with no meaningful notice to consumers whatsoever. It even creates a PR-hyped way to deal with it, calling that stuff that "passes" its totally inadequate tests "Class A Biosolids," thus further obscuring for the American people what is even being put on lands, giving the substance an "A," and erasing the word "sewage" from the equation. In my view, it is a classic and Orwellian effort to reinvent reality. And why? To help deep-six public understanding of the terrible sludge problem resulting from the great good advance in cleaner water. A dated study from the EPA, that you cite, basically says move along, nothing to see here. But, people have a right to know if the food they consume every day, 365 days a year, for decades is being grown in dioxins and other cancer-causing or hazardous substances. I've yet to see them invest in a real longitudinal study about the effect of feeding humans food laced with dioxin two or three times a day every day for 50, 60, 70 years, or the equivalent. In that sense, the people of this country are the lab rats in the experiment of sludging agricultural land, without their knowledge. I would never deliberately plant my tomatoes in the concentrate of solvents, heavy metals, and endocrine disrupting pharmaceuticals or other substances, just because the substance also had nitrogen or phosphate. There are far better ways to get key nutrients to plants than city sewage sludge. And, I think people have a right to know if their food is being grown in substances laced with carcinogens. I think the idea of some for profit company using kids to promote the growing of food in sewage sludge products without disclosure is unconscionable. And, the fact that the EPA has failed to stop allowing our farms to be treated as dumping grounds for substances it objects to in our rivers and oceans simply helps underscore the extent to which that regulatory agency has been captured by the sludge industry. I do not accept the "determination" of a government agency that has literally invested in the sewage sludge industry that deliberately putting dioxins into our food supply to advance that indudustry does not pose "significant" risks to human beings. We'll have more to come on the rebuttal of Kellogg and the sludge apologists in the coming weeks. Meanwhile, you can take all the refuge you wish in dated study by an agency that's captured on this issue. On our end, we'll continue to work to alert people to information about sewage sludge gardening that we believe they have a right to know. If you think speaking this truth plainly is too "emotional," well then so be it.
Lisa is exactly right about the EPA being a "captive agency" to the sewer sludge industry. In fact, she's on point with everything she says in her reply. People deserve to know what the food they consume is grown in and 'fertilized' with. It's not too much to ask unless there's something they don't want us to know. Similar to the coal ash issue, the EPA is a slow moving behemoth of an agency that too often relies on outdated information and/or the industry lobbyist propaganda being the end-all informative sources. How can any agency honestly regulate when the industry lobbyists wrote the government regulatory guidelines that their paying clients are supposed to follow? The revolving door between the EPA and big business is notorious and wide. Just because the EPA says it does not make it gospel, if you will, and the day we stop asking 'why' is the day we may as well roll over and die.
What could possibly go wrong with putting unspecified sludge in your garden? Anyone remember Dan Akroyd's character that sold broken glass as a child's Christmas toy?
I remember! <a href="http://snltranscripts.jt.org/76/76jconsumerprobe.phtml"> Mainway Toys</a>