CMD launched its award-winning ALEC Exposed investigation after a whistleblower gave Lisa all of the model bills secretly voted on by lobbyists and lawmakers. CMD also publishes PRWatch.org, SourceWatch.org, and ExposedbyCMD.org.

Lisa has served as a senior advisor in all three branches of the federal government and in other leadership posts. Before taking the helm at CMD, she was Deputy Assistant Attorney General at the U.S. Department of Justice in the Office of Legal Policy/Policy Development and served as Chief Counsel for Nominations for the U.S. Senate Judiciary Committee for Senator Patrick Leahy. She also worked as the Deputy Chief for the U.S. Court system in the division for lifetime-appointed judges, as an adjunct law professor, and as the leading legislative strategist on privacy issues in national security surveillance. She has testified as an expert witness in both the Senate and the House. Her analysis has been quoted on every major news network in the country and in every major paper in the U.S. and major international outlets.

She has appeared on ABC, NBC, CBS, MSNBC, CNBC, BBC, CNN, C-SPAN, Amy Goodman's Democracy Now, the Thom Hartmann Show, and on numerous other news programs including National Public Radio and the Canadian Broadcast System. Her analysis has been quoted in the Guardian, The New York Times, The Washington Post, The Los Angeles Times, The Chicago Tribune, The Boston Globe, The Associated Press, Reuters, USA Today, the New Yorker, Mother Jones, the Atlantic, Vanity Fair, Esquire, Wired, Congressional Quarterly, Roll Call, National Journal, Legal Times, Newsday, The Nation, In TheseTimes, American Prospect, and The Progressive, among others, as well as online in Daily Kos, The Huffington Post, Talking Points Memo, and other blogs. Her articles have also been published by In These Times, The Progressive, Yes! magazine, the Texas Law Review, and other periodicals. Her analysis has also been cited in numerous books and documentary films.

Graves serves on the boards of CMD and U.S. Right to Know and is one the advisory board of UnKoch My Campus and Free Speech Is for People. 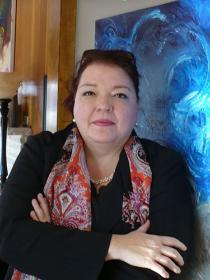