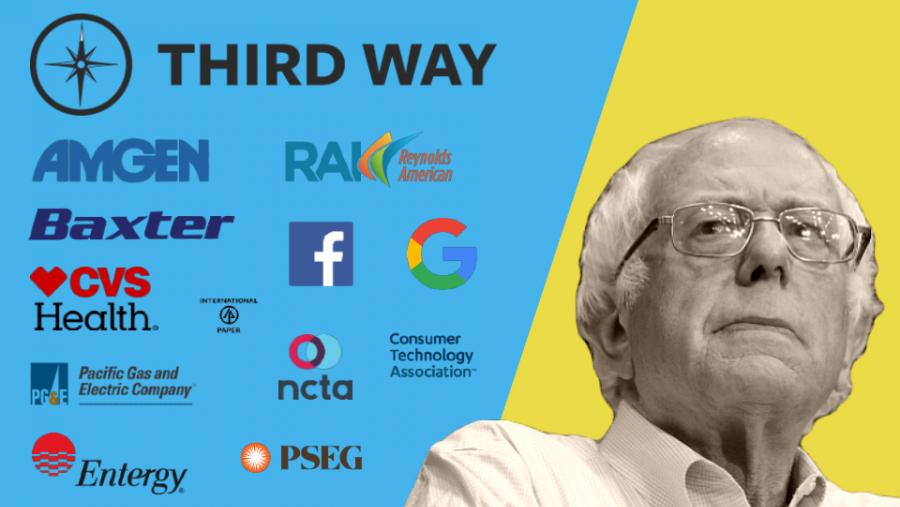 Democratic "centrists" funded by corporate interests have issued "a warning" to Iowa caucus goers against voting for presidential candidate Bernie Sanders. Iowa will be the first state to vote in the 2020 primaries and holds its caucuses on Monday.

Third Way, a centrist think tank funded by corporations and trade groups in the electronics, fossil fuel utility, pharmaceutical, tech, and telecom industries, sent out a memo to Iowa Democrats yesterday, alleging that Sanders is "the easiest target for Trump to beat."

Financed by the likes of pharmaceutical giant Amgen, pharmacy benefit manager CVS Health, which acquired Health Insurance giant Aetna in late 2018, and health products and drug company Baxter International, Third Way claims that Sanders's Medicare for All plan, which would allow the government to negotiate down drug prices and would eliminate private health insurance, "is the only way Democrats can lose to Trump on health care."

The memo cites a report by the Committee for a Responsible Federal Budget, a nonprofit heavily funded by the foundation of the late Wall Street billionaire and Nixon Commerce Sec. Peter G. Peterson, who underwrote campaigns to drastically slash Medicare and Social Security funding. The report alleges that Sanders's Medicare for All plan would add more than $13 trillion to the deficit. Meanwhile, other analyses, including one by the Koch-funded Mercatus Center, have Sanders's plan saving trillions on overall health expenditures while providing health care to the millions of Americans who are currently uninsured.

Third Way's memo cites one NBC/Wall Street Journal Medicare for All poll, using it to claim that the program's support is underwater, even as other recent polls from the Kaiser Family Foundation (Jan. 30) and The Hill/HarrisX (October), show majority support for the proposal. The memo also claims Medicare for All support has "plummeted," yet the NBC/Wall Street Journal poll shows its popularity increased by 3 percent from September to December 2019.

The memo does not mention climate change or Sanders's Green New Deal plan, but it does bemoan the cost of his proposals and resulting tax increases. Three known Third Way donors--electric and natural gas utilities Entergy, Pacific Gas & Electric, and the Public Service Enterprise Group--probably aren't too keen on the Green New Deal, which would phase out the use of fossil fuels in favor of emissions-free technologies.

Third Way did not respond to requests for comment.

Earlier known donors to Third Way include additional corporations. The Center for Public Integrity found that Johnson & Johnson, Medtronic, Hewlett-Packard, and other companies donated to the group in 2012. In 2011, health insurer Humana paid Third Way $50,000 for lobbying.

The known donations make up only a sliver of Third Way's budget, as the group is a 501(c)(4) "social welfare" nonprofit that's not required to disclose its donors. But reporting has linked the think tank to Wall Street donors. In 2013, Lee Fang reported for The Nation that Third Way relied on D.C. corporate lobbying firm Peck, Madigan, Jones & Stewart, a group that counted Deutsche Bank, Mastercard, and the International Swaps & Derivatives Association as clients, for its fundraising. In 2018, Third Way paid consulting fees to Global Strategy Group, which has clients including Citi, Pershing Square Capital Management, and Vulcan Capital, although GSG does not appear to do fundraising consulting.

Several corporate donors to Third Way are or have been members of the GOP-aligned American Legislative Exchange Council (ALEC), a corporate bill mill that links lobbyists with state lawmakers. Amgen, Baxter Healthcare, CVS Caremark, DuPont, and trade groups the Consumer Technology Association and NCTA - The Internet and Television Association are members. Dow, Entergy, Facebook, Google, International Paper Co., and PG&E all severed ties with the organization in the last decade. Dow Chemical left ALEC in 2018 after reporting by CMD exposed the group's ties with far-right extremists, including anti-Muslim hate figure David Horowitz.

The Iowa memo is not the first time Third Way has attacked Sanders in the 2020 campaign. In late 2018, as Sanders was publicly considering entering the race, Third Way ran ads in the early primary and caucus states that claimed that the 2018 elections proved Sanders "failed the test" to beat Trump in 2020.

That summer, Third Way put on a convention in Charleston, South Carolina co-hosted by real estate billionaire Winston Fisher and called Opportunity 2020. Third Way funded focus groups and polls, which it shared with attendees, concluding that Americans would prefer an economic message of "opportunity" instead of Sanders's and the Left's focus on income and wealth inequality. A year and a half later, Sanders is atop the polling aggregates in Iowa, New Hampshire, and California.

In an email to supporters at the time, Sanders called Third Way "a group of Wall Street Democrats" and wrote, "They want us to go back to their failed corporate approach which has led to a massive level of income and wealth inequality, a bloated military budget and a failure to address the crises of climate change, a broken criminal justice system and inhumane immigration policies."

The "Third Way" political philosophy in the U.S. was epitomized by the presidency of Bill Clinton, a Democrat who worked with Republicans to cut welfare benefits and deregulate the financial markets. The centrist Democratic Leadership Council, a group that Clinton chaired before becoming president, was a key member of the Third Way movement. Koch Industries helped fund the DLC, and Charles Koch's top strategist, archconservative Richard Fink, was on its board.

Three Third Way trustees formerly worked for New York Gov. Andrew Cuomo, a moderate Democrat who endorsed Joe Biden for president before Biden entered the race. Third Way President Jonathan Cowan was chief of staff to Cuomo when he was Bill Clinton's Housing and Urban Development secretary. Susan McCue was Deputy Assistant Secretary for Public Affairs to Cuomo at that time. Marc Spilker was a member of Gov. Cuomo’s Council of Economic and Fiscal Advisors.

Third Way paid the Messina Group, the firm of Obama campaign manager and White House deputy chief of staff for operations Jim Messina, $180,000 for consulting in 2018, according to tax records.

"A national think tank that champions modern center-left ideas," Third Way, founded in 2005, has a Board of Trustees stocked with finance executives, including:

Like some of the executives of its corporate donors, Third Way has millions of dollars in foreign bank accounts. Its 2018 990 tax form lists over $5 million invested in "Central America and the Caribbean - Antigua & Barbuda, Aruba, Bahamas."

The Third Way Foundation also gets its funding from major corporations and trade groups, including some that also give to Third Way. Since 2014, it has received $700,000 from NCTA, the Internet and Television Association; $415,000 from the country's largest drug lobbying group, the Pharmaceutical Research and Manufacturers of America; $108,000 from the Securities Industry and Financial Markets Association; $50,000 from ExxonMobil; $40,000 from the American Gas Association; $25,000 from generic drug trade group the Association for Accessible Medicines; and $10,000 from the Consumer Technology Association, according to tax records consulted by CMD.

Others Attack Sanders Too

Other groups are also spending against Sanders as the Iowa primary quickly approaches. As CMD reported, the right-wing political group Club for Growth launched an attack ad this week via its billionaire-funded super PAC, Club for Growth Action. And Democratic Majority for Israel, a political nonprofit staffed and directed by Democratic Party insiders, has spent $800,000 on TV and digital ads opposing Sanders. The ads include criticism of Sanders' health, citing his minor heart attack on Oct. 1, but do not mention U.S. policy on Israel, the group's main focus. The Sanders campaign said it raised $1.3 million off of fundraising appeals citing the attack ad.

Meanwhile, the leftist group Justice Democrats has booked $500,000 worth of digital ads against presidential candidates Joe Biden and Pete Buttigieg and targeting Iowa, New Hampshire, and South Carolina. National Nurses United, a union that endorsed Sanders, has a super PAC that has spent $43,000 backing the senator so far in the 2020 election cycle.