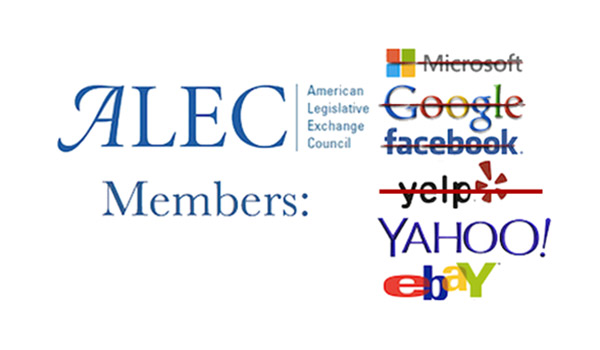 Grassroots campaigners are on a roll, as first Microsoft, then Google, Facebook and now Yelp have caved to public pressure to drop their membership in the controversial corporate bill mill called the American Legislative Exchange Council (ALEC). Next in their sights: Yahoo and Ebay.

On Monday, Google Chairman Eric Schmidt told NPR that the company would end its membership with ALEC and that ALEC was “literally lying” about climate change.

On Tuesday, a Facebook spokesperson told the San Francisco Chronicle: “We re-evaluate our memberships on an annual basis and are in that process now. While we have tried to work within ALEC to bring that organization closer to our view on some key issues, it seems unlikely that we will make sufficient progress so we are not likely to renew our membership in 2015.”

On Wednesday, Yelp confirmed to Common Cause that it was no longer a member of ALEC.

ALEC, which generated or disseminated voter suppression legislation, “Stand Your Ground” laws, and measures to dismantle unions as well as preempt minimum wage and sick leave ordinances, is now in hot water for its “free market” agenda to promote fossil fuels and cook the planet.

As CMD has documented, ALEC is funded by an array of fossil fuel interests, including Koch Industries, Exxon Mobil, TransCanada, and Peabody Energy. ALEC has promoted the repeal of Renewable Portfolio Standards and the approval of the Keystone XL pipeline. It has called on state legislators to engage in "Guerrilla Warfare" against the EPA, and urged politicians to recruit their state attorney general to sue over the EPA's new emissions rules.

The environmental organization Forecast the Facts' #DisruptDenial campaign has been putting pressure on a number of corporations for publicly backing the cause of climate change, but privately funding climate change deniers, including members of Congress and groups like ALEC and the U.S. Chamber of Commerce.

Brant Olson of Forecast the Facts told CMD that the move by the tech firms to sever ties with ALEC shows that climate change is becoming a priority for major American firms. "The vast majority of Americans know that climate change is a reality and tech companies realize the issue is important to their customers. The departure of these firms from ALEC shows that denying the facts on climate change, really doesn't have a place in the modern business world," said Olsen.

The Sierra Club’s Michael Brune told the Chronicle that there is a disconnect between what many tech companies say about climate change and how their corporate parents lobby politically. “If you look at most of the employees in these companies — these are smart people who believe in climate science and they believe in clean energy technology,” Brune said. “And yet some of the institutions that their companies associate with are knuckle-dragging climate deniers. The government affairs office isn’t coordinating with the executive office."

Common Cause, Forecast the Facts, Sierra Club, Stand up to ALEC, Roots Action, Sum of US, People for the American Way, Progress Now, the Center for Media and Democracy and many other citizen groups and organized labor groups sent a formal letter to Google September 3 asking the firm to quit funding ALEC. In addition to thousands of emails generated by the groups, an untold number of postcards distributed by the Center for Media and Democracy were sent directly to Google corporate headquarters after the cards were handed out at the annual grassroots festival "Fighting Bob Fest," named for Wisconsin Senator "Fighting Bob" La Follette. Groups protested Google's ALEC membership at its headquarters in February, and Public Citizen spearheaded an action at Google's corporate shareholder meeting in May, and continues to demand that Google sever its ties with the U.S. Chamber of Commerce.

Over 80 firms -- including some of the largest Fortune 500 firms in the nation -- have dumped ALEC since CMD started launched ALECexposed.org in 2011. See the list of ALEC corporate members here.

Update: After this story was published on September 24, Yahoo issued a statement affirming that it was also leaving ALEC.

Even in this, the concept of Planned obsolescence runs brazenly rampant in the mobile technologies industry. It would be nice to see these companies shine some light on that as well, as it is an exploitation of consumer trust and rapidly fills our land fields with pollutants as well as "precious materials" put to callous waste to perpetuate the throw away culture it has created, serving only to help line the pockets of ethically-deficit capitalists. Google deserves much praise here on behalf of in their attempts to create modular mobile devices. Lets hope this is a step toward recognizing and holding accountable companies that depend on deception with no regard for the detriment, in order to maintain their presence.