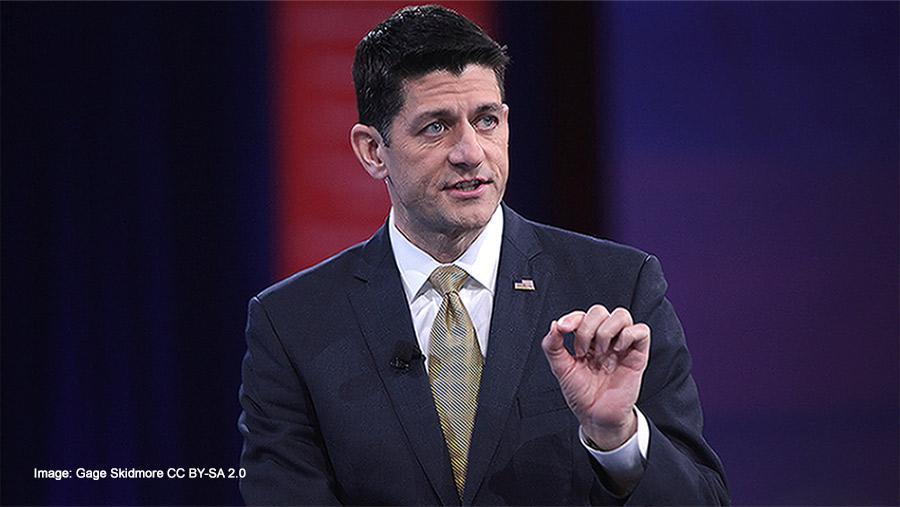 MADISON -- One day after Donald Trump spoke to a crowd of 20,000 in Cincinnati, Speaker Paul Ryan spoke to a group of about 100 undergraduates, 50 reporters and a phalanx of cameras on the "Failures of Liberal Progressivism" in a heavily controlled and scripted event in Madison on Friday.

The students were members of the College Republicans of UW-Madison, a student group led by Gov. Scott Walker's son Alex Walker.

Acknowledging that the election has taken "a dark turn," Ryan quickly pivoted to his hallmark message of fiscal austerity and his Better.GOP site, a website and policy plan first unveiled in June.

"The worst thing about the liberal progressive agenda is that it hurts the people it claims to protect," said Ryan. "We are in the weakest recovery since the Great Depression. 94 million Americans are out of work or not even looking." Ryan decried "a welfare system that pushes you down a conveyor belt, that keeps people down instead of helping them break free."

But you didn't hear any talk of the Wall Street meltdown that threw the economy off track or the reckless deregulation pursued by both Democrats and Republicans in the 1990s that set the stage for the financial meltdown. No Ryan prefers to talk about today's "liberal progressive agenda" that pushes "schemes" like overtime pay and retirement planning "when there is no money left."

The invitation-only speaking engagement and managed "Q&A" at the Madison Masonic Center Foundation followed a tumultuous week for Ryan which began last Friday with the release of an Access Hollywood audio tape in which Trump brags about his ability to grope women. When you're a star, "they let you do anything," said Trump.

The following day, Ryan rescinded Trump's invitation to his annual "Fall Fest" in his congressional district. But Ryan was booed and heckled by some of Trump's grassroots supporters and even called a "traitor," according to news accounts. On Monday, Ryan said in a conference call with House Republicans that he will no longer defend Trump, nor campaign for him, over the objections of some.

For those running for re-elect, Ryan's advice was effectively "every man for himself." "You all need to do what's best of you and your district," he said.

Trump responded by slamming the Speaker as a "weak and ineffective leader." He tweeted "It is so nice that the shackles have been taken off me and I can now fight for America the way I want to."

Ryan would like to change the topic, but last he spoke in Madison new accusations of groping were leveled by a woman against Donald Trump in the Washington Post.

Ryan made it clear that his priority is defending the Republican majorities in Congress, but with three dozen GOP leaders jumping from the Trump train this week and with a month to go, Ryan has his work cut out for him. Nancy Pelosi is crushing him in fundraising and the New York Times says big donors are urging the RNC to cut ties with Trump.

But if Ryan is battling for the soul of the Republican Party he picked a strange battleground and a strange message for students saddled with college debt. Ryan had a hard time scraping up even a small audience in liberal Madison and kept members of the public from attending. He took some questions from the audience, all submitted in advance and screened by his staff, prompting some to call it a "farce" of a Q&A.

Without irony the Speaker of the U.S. House of Representatives stated "our country is on the wrong path." Without irony he stated "instead of lecturing us, our leaders listen to us and offer positive solutions to tackle our problems."

One wonders what he would have heard from Wisconsin's youth had he met with them without the carefully managed stagecraft of a scripted photo op.

Paul Ryan remind's me of an Ivy League version of SNL's "Drunk Uncle"...lots of pontification with seemingly no knowledge on the subjects of which he preaches...there IS no real "welfare" anymore! Actual cash payments are small and limited in time, food stamps have been reduced to crumbs, housing assistance has waiting lists of YEARS...so he preaches and preaches ad nauseum on "welfare" and only if you know NOTHING about it can you listen to it and think he makes sense! If you look at 6 functions of the Wisconsin State budget-pensions, healthcare, education, welfare, protection and transport- Education and healthcare are at the top by far-welfare is at the very BOTTOM. LEARN FACTS. usgovernmentspending.com do you know where your tax dollars are?
There you go again. Facts. Just like climate change, whenever a Republican is making a case, someone comes along and rains on the parade with this "facts" argument. Sheesh. The real welfare is the obscene free ride given to corporations and the super rich - not to mention our crazily bloated military, but when you are bought and sold by those very interests, facts tend to get in the way.
How can a career politician like Paul Ryan not understand the functions of a democratic government? It's there to allow us a means to work together and serve ourselves. It's how we take responsibility. Why does he insist on standing in the way?