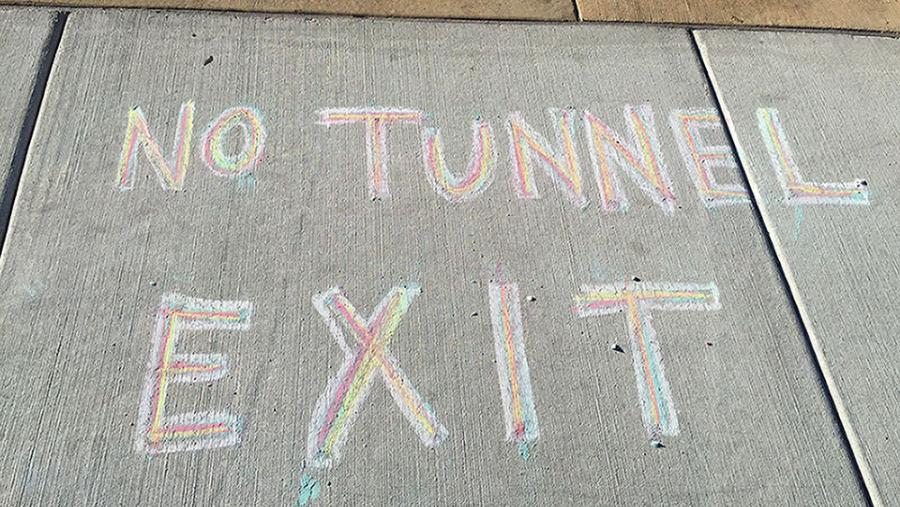 Scott Walker had it all, plenty of money from a cadre of billionaire backers, the Koch Brothers' blessing, 90 full-time staff and a passion for campaigning. The 47-year old career politician had tackled 25 primary and general elections in 25 years. So how is it possible that this battled-hardened veteran could go from leading the Iowa race in July to three percent in September? A CNN poll had him hovering near zero.

Scott Walker had a fatal flaw. He believed his own spin.

Union-busting is Popular: Walker's theme was "Unintimidated." The name of his book, the name of his Super PAC. Yet while Wisconsin GOP legislators had to face the ire of the public all during the ACT 10 showdown over collective bargaining, Walker hid from the public nonstop. He stopped going to public events; he stopped having regular press conferences; he famously used a previously unknown tunnel to bring in friends to his inauguration. On the national scene he doubled down. He likened his constituents to ISIS, he hailed PATCO as a foreign policy victory, his answer to every question was "big union bosses." Even after it was clear he needed to re-boot his campaign, he rolled out a $7 million ad-buy in Iowa based on a similar theme and a extremist plan to crush unions at the federal level.

If he actually spoke to anyone beyond his narrow circle, he may have discovered that beating up teachers, nurses and firefighters and ladling on more and more austerity not only harms the economy, it's just not that popular. "The American people have rejected Scott Walker's anti-union brand," said Wisconsin AFL-CIO leader Phil Nuenfeldt. Support for unions is growing in America--58 percent of Americans approve of unions--61 percent now say they want unions to maintain their influence or develop more. Americans have dramatically more negative attitudes toward politicians, corporations and banks than they do toward unions. The union-busting Iowa ads failed to budge his numbers sufficiently or he would not have dropped out.

Winner in a "Blue State": Team Walker ceaselessly parroted the talking point that the Governor repeatedly won in a blue state. But Wisconsin is one of the most competitive states in the nation, purple not blue, and Walker's three state-wide races were never in a presidential year with maximum turnout. "Winning three times in a blue state" implies that a herd of Democrats were attracted to his message, but Walker won by 52 percent in 2010 a Republican wave year, 53 percent in 2012 with a $36 million dollar war chest, and 52 percent in 2014, failing to expand his base and standing in stark contrast to former Governor Tommy Thompson who won his last two elections with 67 percent and 60 percent of the vote.

Unlike other candidates, as Walker's national profile rose, his Wisconsin numbers tanked. As Wisconsin pollster Charles Franklin put it: "The falloff in his support, to a 39-percent approval rating, and with only about 37 percent saying he cares about people like them here in the state, certainly shows that voters at the moment don't think he's that into us anymore."

President Obama Isn't a Christian: Early in February, Walker told the national press he wasn't sure if President Obama was a Christian. This "cowardly" "crazy talk" as the Washington Post referred to it at different times, made it clear that Walker was ready to pander to the most extreme element of the party. Evolution? Never heard of it. Abortion? I defunded Planned Parenthood before you defunded Planned Parenthood. Walker performed a full flip-flop on late term abortion, suggesting in a campaign ad before the 2014 election that it was a matter between a woman and her doctor; then championing and signing an extreme abortion bill shortly after the election. He performed a triple flip on birthright citizenship. He considered building a wall in the Upper Peninsula.

His positions on many issues were mean-spirited and downright un-Christian, under-cutting his carefully cultivated image as a nice, steady guy with deep roots in middle America. Later in the campaign he started his "day one" litany. On "day one" he wanted to kick millions off of health care, bust unions, rip up the Iran deal and yes, bomb Iran. The performance was not just feckless, it was reckless. The result? One GOP strategist told National Review: "he abandoned the center of the Republican electorate, so now he's left with neither the center nor the right."

Ready to "Wreak Havoc": Shortly before he dropped out of the race Walker sent out a bizarre press release saying he was known for "wreaking havoc in Madison, and he has a plan to do so in Washington." The release touted his latest union-busting proposal that owed a lot to the American Legislative Exchange Council, but was greeted with an eye-roll and little coverage from the national press. The frat-boy spin was hilarious to the left, which had been working hard to tell the facts about the shaky state of Wisconsin's economy. But it suggested to the right that he was in trouble and not being well-served by his staff. This was confirmed by his equally bizarre exit speech: "I believe that I am being called to lead by helping to clear the field in this race, so that a positive, conservative message can to rise to the top," said Walker.

Translation: Walker was being called by God to lead the losers out the door. This is what campaign managers are for, to rein in this sort of nonsense. The right-wing funders calling for him to dump Rick Wiley came a little too late, but Walker's quick exit did save him the humiliation of being sent to the kids table during the next debate.

The national media delighted in Walker's contortions. They delighted in the protesters who would appear out of the blue at every event. Tweets from national reporters on the campaign trail were priceless. This harsh media spotlight exposed Walker for what he was, not ready for prime time.

In the end, Walker's race lasted half as long as Tommy Thompson's 2008 failed bid.

The Guardian's Jeb Lund wrote Walker's epitaph some time ago: "Scott Walker should've been the Republicans' – or at least the Koch Brothers' – Dark Money Knight, riding manfully to Washington on his union-busting, climate-change-denying Harley. . . Instead, he's looking more like a man destined to return to Madison with a wad of Delta Sky Miles to haunt the capitol tunnels, a wraith occasionally seizing hapless passersby at underground crossroads and demanding they tell him if they've seen Ronald Reagan."

Photos taken outside the Edgewater Hotel in Madison where Walker announced he was leaving the race.

Headline writer take note: The tenses of the verb sink are sink, sank, sunk. So the gramatically correct headline for this story is "Four Whoppers that Sank Scott Walker." Sank is past tense, sunk is past participle. Scott Walker was sunk by four whoppers. They sank him.
I will never make that mistake again.