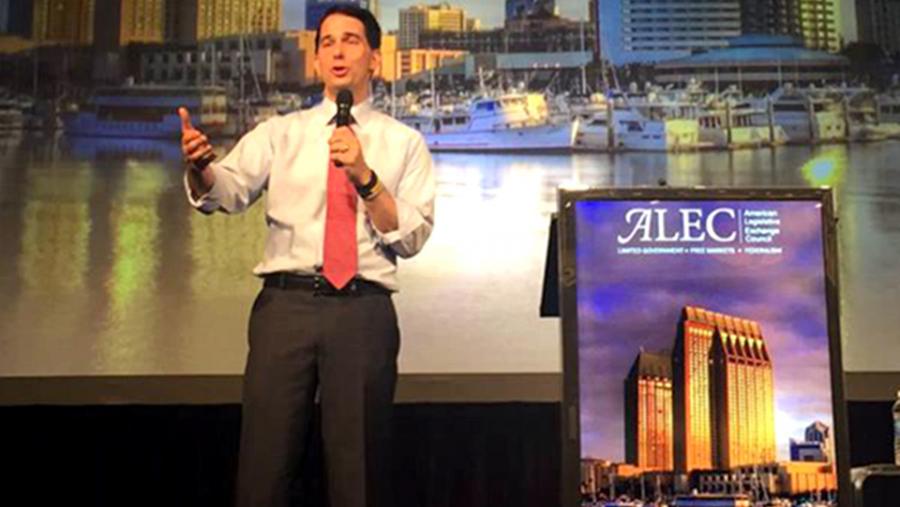 If Scott Walker is elected president, he will enact American Legislative Exchange Council (ALEC) policies on the first day of his presidency.

Walker was an ALEC member as a state legislator, and according to outlets like The Guardian, Walker could be "The First ALEC President."

In a speech today at Eureka College, Walker pledged to "wreak some havoc on Washington," and promised his first day in office would be "one of the busiest the White House has seen in years."

"On Day One, I'm going to stop the government from taking money out of the paychecks of federal employees for political union dues because I don't think any worker in this country should be required to put money into a political fund that doesn't support candidates that they don't support," Walker said.

That policy, described by supporters as "paycheck protection," is a means of draining unions of funding and has long been promoted by ALEC as the "Paycheck Protection Act" (with variations like the "Public Employer Payroll Deduction Policy Act" and the "Public Employee Paycheck Protection Act"). The legislation tilts the political playing field in favor of big electoral spenders like the Kochs and the U.S. Chamber of Commerce--both ALEC funders and Walker backers--by allowing unlimited corporate spending in elections but putting limits on spending by organized workers.

Notably, Walker has no qualms about corporate CEOs secretly using shareholder funds to back politicians that shareholders may not support. During the 2012 recall elections Walker offered CEOs a way to bypass the state's corporate donation bans by giving to the affiliated nonprofit Wisconsin Club for Growth, which he said "can accept corporate contributions and it is not reported." Following Walker's fundraising appeal, Devon Energy CEO Larry Nichols wrote a $50,000 check from the corporate account to the Club. The donation was never publicly reported, and Devon Energy shareholders never knew or approved of their money being used to support Wisconsin Republicans. The donation was only later revealed by a "John Doe" probe into possible campaign finance violations.

Walker has long championed ALEC policies. As a state legislator he pushed ALEC-inspired tough-on-crime measures that ballooned prison populations and helped make Wisconsin the state with the highest rate of incarceration for black men. In his first year as governor Walker signed at least 19 ALEC bills into law, according to a Center for Media and Democracy analysis.

Walker addressed ALEC's most recent meeting in San Diego, where he ticked off a list of his accomplishments as governor, many of which reflected ALEC policies, such as voter ID, a "stand your ground" law, concealed carry, tort reform, and right to work. He also boasts about these policies in his standard stump speech.

"If we can do all those things and more...in a blue state like Wisconsin, there's no doubt we can do it in America with the right leadership," Walker told the ALEC crowd.

Just a few facts that Walker (and possibly ALEC) overlooked. Federal union dues already cannot be used for political reasons by law. The federal workforce is an open shop, which means dues are voluntary.
beware of dan sullivan, carpetbagger from ohio (or d.c., it's hard to tell where he was a voting resident). the kochs got him elected to a senate seat alaska. watch out for this slimeball, he is a pure manchurian candidate. what a lovely trio we have representing alaska in washington...literally, the three koch stooges.