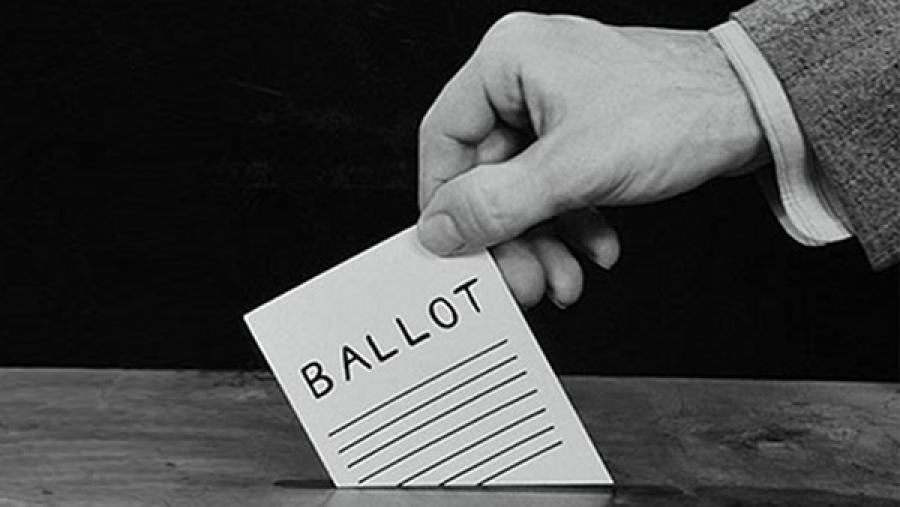 Voters in cities and states across the United States voted on a number of ballot propositions affecting the environment on Tuesday, November 4.

Citizens voted on banning or suspending fracking -- the controversial process for extracting methane gas from shale deposits -- and how to address water use in cities and counties in California, Ohio, and Texas.

Fracking was on the ballot in three communities in Ohio: Athens, Youngstown, and the Village of Gates Mills. It was before the voters of three counties in California: Mendocino County (where the initiative also addresses water usage in the drought-ridden state), San Benito County, and Santa Barbara County.

Denton, Texas, which is located in a very active part of what's known as the Barnett Shale formation, approved an initiative banning fracking within city limits. A pro-fracking group named Denton Taxpayers for a Strong Economy had a war chest of $231,000 as of October 7 -- compared to Pass the Ban's $51,000 -- according to the Texas Observer. Almost all of the pro-fracking funding came from energy companies with natural gas wells in Denton. (It's not clear how much in federal or state taxes those corporations have paid per year, despite the group's name.)

Two anti-fracking initiatives that would have been on the ballot in Colorado were pulled earlier this year after intense public pressure from the fracking industry and its allies, including public relations spinmeister Richard Berman, who was captured on tape talking about how he tries to undermine his clients' opponents through his web of non-profits that enrich his for-profit PR firm.

Marco Gonzalez, Executive Director of the Coastal Environment Rights Foundation, wrote that the proposal "will not mitigate the effects of drought, and does nothing to support long-term water self-sufficiency.... Simply put, Proposition 1 would subsidize more of the same poor water planning that caused our current, precarious water supply paradigm.... Instead of providing substantial funds to help communities save water by replacing aged and leaking water infrastructure, the water bond focuses billions of dollars on Northern California dam building to subsidize corporate agribusiness growing the wrong types of crops, with outdated technology, in the wrong places for decades."

The state of Maine approved the legislatively-referred "Maine Clean Water and Wetlands Bond Issue, Question 6" which will issue $10 million in bonds to ensure clean water, protect drinking water, and restore wetlands. The issue received strong support in both chambers of the state legislature as well as in the media. The Portland Press Herald editorialized that voting "yes" on the question "would help fund projects that will improve and protect the environment and create or maintain hundreds of jobs."

Colorado and Oregon both considered mandating the labeling of genetically modified organisms (GMOs).

Industry funding to defeat Oregon's Measure 92, which would require that buyers be told if grocery products contain GMOs, had reached $19 million as of October 31, according to campaign finance disclosures. The previous state record for spending on a ballot initiative was $12 million for both sides combined, as noted by the pro-labeling advocacy group Center for Food Safety (CFS). Global mega-corporation Monsanto alone contributed more than $3 million to defeating the initiative just in the month of October. As of 11:54 am CST 11/5, the outcome of Oregon's vote was still unresolved.

Colorado's Proposition 105 saw over $16.6 million in opposition funding. Corporations opposed to labeling GMOs spent over $100 million in ballot campaigns in California, Washington, Oregon, and Colorado, according to CFS. The proposition was not approved.

Meanwhile, Maui County in Hawai'i approved a moratorium on growing GMOs, and Humboldt County in California approved a GMO ban.

Opponents to Maui County's initiative raised nearly $8 million. Although the "no" campaign committee is called "Citizens Against the Maui County Farming Ban," almost $7 million of the total raised was contributed by two of the "Big 6" pesticide and GMO corporations, Monsanto and Dow Chemical. Ordinary people supporting the initiative, in contrast, raised about $76,000.

Josephine County, Oregon passed a GMO ban in May 2014. On November 4, voters in that county considered but failed to approve the nation's first Community Bills of Rights citizens' initiative banning heavy pesticide use.

Citizens have been especially concerned about pesticides used in aerial spraying by the timber industry and in roadside spraying by county and state government, according to the Community Environmental Legal Defense Fund (CELDF), which drafted the initiative at citizens' request. According to CELDF organizer Kai Huschke, "On November, 4th, citizens will have the opportunity to say 'no' to heavy pesticides, and 'yes' to clean air, water, and soil. They will have the opportunity to challenge the corporate claimed 'right' to spray poison, and the state's preemption of their right to protect themselves."

In Alaska, voters approved an initiative that gives the state legislature the ability to halt open-pit mining projects in Bristol Bay if activities harm wild salmon within the fisheries reserve. Voters in the Lake and Peninsula Borough of Southwest Alaska have already approved a ban. A similar statewide ballot measure was voted down in 2008.

New Jersey voters voted to amend the state constitution in order to capture a larger percentage of corporate business tax revenues for environmental programs, and a larger portion of those revenues for open space preservation. The amendment had broad bipartisan support in the state legislature, although Governor Chris Christie, a potential GOP candidate for president in 2016, opposed it. A number of local environmental and energy groups supported it.

Additionally, voters in Wisconsin, Texas, and Maryland voted to amend their state constitutions to require revenue generated by transportation fees and taxes to be restricted for car- or truck-related transportation expenditures rather than available for use to support mass transit, greener alternatives, or other state needs. The Texas and Maryland amendments specify use for roads and highways. The Wisconsin amendment confines those revenues to the state's transportation fund, and environmental and public interest advocates like the state chapter of the Sierra Club and WISPIRG are concerned that it will fuel wasteful highway spending at the expense of more environmentally sound alternatives. These ballot measures reflect "model" legislation pushed by the American Legislative Exchange Council (ALEC), as the Center for Media and Democracy, which publishes PRWatch, has reported.

The Maryland amendment did not restrict transit, only the use of transportation funds to be used to balance the state budget.
<p>Correct, transit is included in expenses able to be paid by the Transportation Trust Fund. But the amendment prohibits the transfer of funds to any other fund for any other purpose&nbsp;(education, environmental cleanup, etc.) "<a href="http://www.elections.state.md.us/elections/2014/ballot_questions/Summary%20question%201%20-%20Chapter%20422%20of%202013.pdf" target="_blank">unless</a> the Governor declares a fiscal emergency by executive&nbsp;order and the General Assembly passes legislation by a supermajority vote approving a different&nbsp;use or a transfer of the funds":</p> <p>From <a href="https://web.archive.org/web/20140423160341/http://mgaleg.maryland.gov/2013RS/bills/sb/sb0829e.pdf" target="_blank">the bill</a>: "establish a&nbsp;Transportation Trust Fund to be used only for purposes relating to&nbsp;transportation except under certain circumstances; prohibiting the transfer of&nbsp;funds in the Transportation Trust Fund to the General Fund or a special fund of&nbsp;the State except under certain circumstances"</p> <p>And from the <a href="http://www.elections.state.md.us/elections/2014/ballot_questions/Summary%20question%201%20-%20Chapter%20422%20of%202013.pdf" target="_blank">ballot question</a>: "The Transportation Trust Fund is used to finance operating and capital&nbsp;expenses for highway, transit, aviation, port, and motor vehicle services and projects."</p>