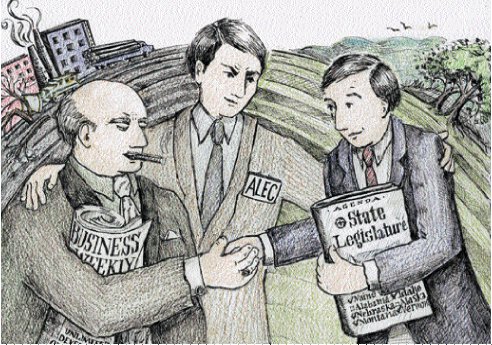 The American Legislative Exchange Council (ALEC) meets in Washington, DC this week for its "States and Nation Policy Summit," which is one of the ways ALEC crafts and pushes its legislative agenda for the coming year. U.S. Senator Ted Cruz -- who helped push the country to the brink of financial default to thwart the Affordable Care Act (ACA) -- headlines the conference on Thursday, December 5. Failed vice-presidential candidate Rep. Paul Ryan (R-WI) and his Senator counterpart Ron Johnson (R-WI) will also address the crowd.

But what will happen behind closed doors during the meeting?

ALEC posted part of its legislative agendas for the meeting for the first time this month, while continuing to hide its funders and corporate authors of special interest legislation, as the Center for Media and Democracy (CMD) has reported. On ALEC's agenda for 2014 are the following priorities and bills (which will become official ALEC "models" once passed by the task forces -- with corporate lobbyists voting as equals alongside state legislators -- and approved by the board of directors):

Opposing U.S. Consumers' Right to Know the Origin of Our Food:

Undermining the Rights of Injured Americans to Hold Corporations Accountable:

CMD will be reporting on any news emerging from ALEC's meeting in Washington, DC this week, so stay tuned to PRWatch.org for more. You can also take action to ask Google to stop funding ALEC by clicking here.

These agenda items all seem fairly mainstream to me. My brother recently faced a huge delay putting in a home foundation because he had to wait for an environmental inspection of a dirt pile to see how removing dirt from it would affect the environment. Why don't Big Business and their lackeys the democrats just decide to outlaw Small Business altogether?
These proposals aren't about small business, they are about allowing big business to make profit with no concern for the effect on people like you or your brother. Big business = big chance of big pollution, big rip off of workers and big rip of customers. So big push by big business for legislation to limit governments power to stop that happening. If small business was a threat to corporations they would be bringing forward legislation to limit small business threat to big business.
Indeed they *are*. You know the real reason for a lot of these burdensome regulations? It makes it nearly impossible for new competitors to enter markets and giving the advantage to big businesses, which can much more easily handle these requirements with their ample legal departments than any small business. The result is less competition, higher prices, lower wages, and more profit for big businesses and their shareholders and executives. Free enterprise my donkey.
right.
So you want to go to an unlicensed doctor. Go right ahead. Hope you have a pre-paid funeral plan
Don't worry, you won't have to use a licensed funeral home, or cemetery, for that matter. A Hefty bag with the trash would work just fine. The non-union trash workers won't care, either, and if they do - they can't complain, or they will be replaced with another minimum-wage person willing to do it - likely an illegal alien, since they ask no questions - at least in English!
Wow your about totally clueless, did you just start paying attention to US politics and economics this year. The GOP has been in the back pockets of big business for the past CENTURY. The left only started to follow the right about 30-40 years ago which is why both parties have moved to the right since the 80's. Your totally clueless, it's hysterical.
Give them time, they are working on that too..
Will someone please announce an updateon how far the IRS has gotten in its belated "investigation" of ALEC? That was announced in 2013! IRS, PLEASE CALL HOME. YOU ARE NOT INVISIBLE, BUT YOU ARE PLENTY SILENT ON YOUR ALEC 'INVESTIGATION'! Bring forth your data and the results of your investigation starting a year or 2 ago.
Hello. The Patient Access and Expansion Act does not call for stopping the licensing and certifying of medical professionals. This statement is not accurate. Thank you.