As concerned workers come together across Michigan in protest, partisan politicians are poised to make one of the strongholds for America's blue-collar worker rights into a so-called "Right to Work" (RTW) state -- in accordance with the ALEC blueprint to change to state laws at the behest of some of the biggest corporations in the world. Yet, 42 corporations, including General Motors, have distanced themselves from ALEC this year after ALEC's role in controversial and divisive legislation was exposed.

RTW -- Brought Home to You by ALEC (and the Kochs, of course)

At issue is a bill spearheaded by ALEC legislators so beholden to their corporate benefactors that they think it's legitimate to vote in secret as equals with corporate lobbyists on model bills like RTW through ALEC "task forces," as the Center for Media and Democracy's PRWatch/ALECexposed has previously reported. Key provisions of the Michigan RTW bills (for instance, HB 4054) are taken almost verbatim from the ALEC template.

That agenda is part of a corporate wish list of Charles and David Koch, the oil billionaires who have spent millions trying to popularize extremist ideas and move them from the fringes into binding law. David Koch's group of political operatives known as "Americans for Prosperity" (AFP) -- which I call "Americans for Greed" -- is backing the divisive legislation in Michigan.

RTW -- Brought to You by Vengeful Partisans and Very Lame Ducks

But the bill rushed through the statehouse for the governor to sign is also poisonous political payback in a state where President Barack Obama beat Mitt Romney by almost 10% of the vote (nearly half a million votes), despite millions spent by the Kochs and other billionaires in campaign donations as well as dark money operations to get Romney in the White House and to get laws changes to their liking.

Michigan was a landslide loss for Republicans, who also lost seats in the state legislature in Lansing, a loss which will take effect when the next class of legislators is sworn in this January.

The get-out-the-vote (GOTV) effort in Michigan was built on workers banding together to knock on doors, make phone calls, and get people to the polls on election day. Volunteers from organized labor unions were not the only ones working to get people to vote. AFP and others backing Republicans knocked on doors too, and Romney won the vote of 50,000 more Michiganians than John McCain did in 2008, but fell far short of winning the state's 16 electoral votes.

When the dust settled from last month's election, a vindictive and diminished majority in the state legislature decided to push through a bill to weaken not just American workers' power to negotiate effectively with corporate managers but also to weaken organized workers as a political force at the ballot box.

It's a sour, petty, reprehensible maneuver.

It's especially arrogant to push it through at the last minute of a "lame duck" legislature whose authority is about to expire, and it is especially deceptive to do so after Governor Rick Snyder assured voters he would not pursue RTW in the state.

It's also a calculated move that demonstrates a palpable disdain for the will of the people in a state whose prosperity was built on private sector manufacturing jobs, with wages and benefits negotiated by labor unions. Those were good paying jobs that gave hard-working families financial security and a real chance to achieve the American dream and help their children have opportunities to be better off than their parents started off.

But those were the glory days before David Koch's prior group of operatives, dubbed "Citizens for a Sound Economy" (CSE) and his allies at the U.S. Chamber of Commerce, started pushing hard in the 1980s for trade agreements that forced American workers to compete with third world wages and that shipped jobs overseas. And, it was before Koch's CSE launched the inside-the-beltway push in D.C. in the late 1980s to repeal the Depression Era Glass-Steagall protections against banks speculating in the stock market, a repeal that made the Wall Street stock market crash of 2008 possible, if not inevitable. (Koch Industries also lobbied against the modest Dodd-Frank reforms of derivatives trading in the 2009-2010 congressional session.) 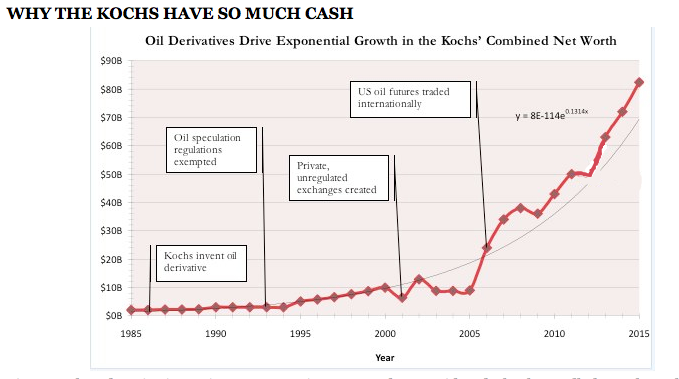 Koch-backed ideas like these -- along with passing RTW, privatizing Social Security, thwarting efforts to address climate change -- have been very good for the Kochs. Some have already benefitted the Kochs' operations, including their speculation on oil prices and trading of oil derivatives. Such investments have helped make these two billionaires even richer. Since the Wall Street meltdown began in 2008, "the Kochs have exponentially increased their wealth by 58% while median family net worth dropped 40%," according to the research of the International Forum on Globalization.

But, such policies are very bad for ordinary Americans.

Wages for workers are lower in RTW states.

People who work in states that have bought the economic snake oil, like RTW, sold by the Koch-fueled hucksters from ALEC, along with their buddies at stink tanks like the Mackinac Center, make less than Americans in states that have not embraced this backward thinking.

It should come as no surprise that when private sector unions are weakened that this weakens the negotiating power of unions and also weakens the competitive wages offered by companies that are not unionized.

RTW is like a receding tide that lowers all boats.

Almost 75 years ago, Congress passed the National Labor Relations Act (NLRA) to help protect American workers' rights to organize and negotiate the terms of employment with corporations, helping to level the playing field between powerful corporations and individual workers with little leverage to get better wages, benefits, and working conditions. The NLRA specifically authorized the contracts collectively negotiated by labor unions to require all workers benefitting from the contract to pay dues to the union that negotiated the contract, a fair procedure called a "union security agreement" that helps protect against freeloading and also keep a union's power to enforce the contract strong. 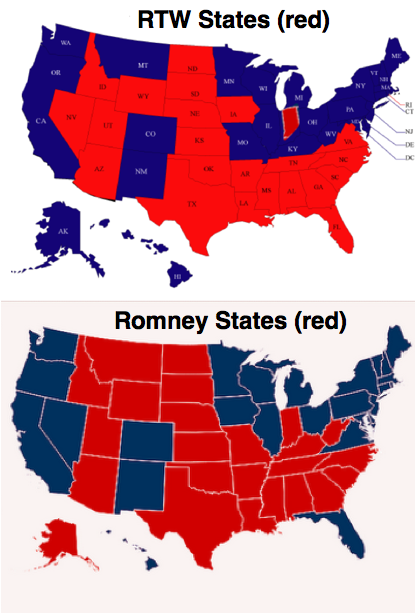 But in 1947, Congress under pressure from corporations amended that law to allow states to opt out of those procedures through what proponents call RTW laws. Other than the heart of the old confederacy -- which enacted RTW laws in the same period that states were trying to suppress the civil rights movement, which included many unions acting in solidarity -- most of the states in the country have not adopted RTW.

In fact, only three states have passed RTW in the past 25 years (Idaho in 1995, Oklahoma in 2001, and Indiana in 2012); the 20 other states that passed such legislation largely make up the deep south and a red swath west of the Mississippi. The 2012 presidential election map of "red" states looks strikingly close to the RTW map.

But the vast majority of blue states, like Michigan, have not embraced the long-standing ALEC agenda item of RTW. And, Oklahoma's experience over the past decade since the law passed has not been a poster child for higher wages and economic security for families.

RTW -- Scrooge, but What Will Christmas Future Bring?

It seems that whomever got to Governor Snyder and convinced him to suddenly help ram RTW through is more interested in turning Michigan red than in making sure Michigan workers have a better shot at better wages, a strong wage base that would be spent in local communities and thus help to rebuild the state's economy.

But, this political calculation could backfire at the ballot box because workers in Michigan were not voting this November or Novembers past for policies that result in even lower pay and fewer protections for the health and financial future of their families.

Repealing more than 75 years of protections for private sector unions in the Wolverine State in a matter of hours -- and in disregard of the state's culture of private sector unionization and the lack of public support for this action -- is likely to have many adverse consequences, some intended and some unintended. Just ask Romney's Ohio allies who saw first-hand the public backlash against political machinations to make it harder for Americans there to vote.

Still, there is no doubt that if Governor Snyder signs the RTW bill, Michigan workers will be hurt and unions in the state will be hurting, in the near term.

RTW in Michigan this holiday season -- it's a bill only Ebenezer Scrooge, or his modern day equivalent, could love.

Republican politicians are doing what they were hired to do. People could have voted against them. Maybe they did, but perhaps there were too few to defeat them. Regardless, they need an easier way to participate between elections, and a way hold politicians accountable for implementing solutions that benefit all of us. www.at10us.com
I appreciate your analysis of ALEC but I'm troubled by how little this article actually discusses the law in question
Someday, hopefully, the middle class will realize that it owes its existence to organized labor and that the only answer to stopping the downhill slide of the middle class is to rebuild the unions into a unified force able to withstand the assault by the corporate moguls like the Koch Brothers and their sinister organization A.L.E.C. So far A.L.E.C. is winning and so many middle class people are shooting themselves in the foot by criticizing unions.
I agree... I really dont think that corporations would supply the benefits of a job had it not been for unions. Only when it's all gone will people wake up & regret what had happened... These Corps are using their money to persuade & buy off state republican legislators & Governors to do their bidding...this has been going on for awhile now..They've learned that politics has consequences @ the local & state levels...it's been past time for Democrats to awaken to this situation & fight back
The World Bank, known for being notoriously conservative, released a report in February stating labor unions are good for the economy. Information gathered from over a thousand studies on the effects of labor unions and collective bargaining on the performance of national economies showed that workers who were members of trade unions earn higher wages, received more training and worked fewer hours. High rates of unionization also lessens inequality of earnings, especially for women and minority groups. Their report sited: Unions and Collective Bargaining: Economic Effects in a Global Environment. The study also found that countries fare better economically if large numbers of workers belong to trade unions.More specifically the study shows that high unionization rates are associated with lower unemployment and inflation, higher productivity, and speedier adjustments to economic shocks. The World Bank's Managing Director stated "Good industrial relationships between labor and business lead to an economy that is stable and productive." The middle class better get a clue right that unions are not the bad guys. The misinformation that has been fed to the public about unions was intentional and the misinformed have bought it lock, stock and barrel.