The Sunlight Foundation has documented that the Finance, Insurance and Real Estate (FIRE) industries have a huge stake in everything that happens in the committee and they invest heavily in certain committee members. Just take a look at this chart by Sunlight and Opensecrets.org: 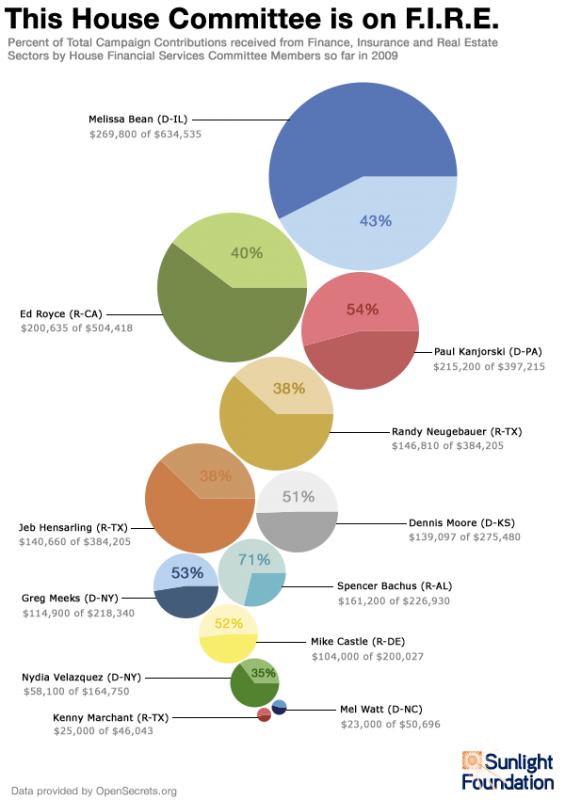 Take Congresswoman Melissa Bean (D-IL), for instance, she is the top recipient on the committee of FIRE campaign finance dollars in 2009. She is also one of the biggest threats to meaningful reform. Evidently, Bean's take away from the financial crisis -- which threw 7 million Americans out of work and cost taxpayers $3 trillion -- is that consumers need less protection not more. According to watchdogs at Public Citizen, Bean is planning to introduce an amendment to the CFPA bill tomorrow which would take away the right of states to protect consumers more aggressively than the feds.

That's what got us into this mess in the first place.

Many years before the 2008 financial crisis, state attorneys general (AGs) noticed a big problem in their communities. Angry consumers descended upon their offices to complain about a new type of predatory-lending in the housing sector. Consumers were being offered deceptive teaser rates on mortgages that later skyrocketed. There was a raft of undisclosed charges and fees. The interest rates eventually ballooned beyond their ability to pay, and they started losing their homes.

Many state AGs started investigating, demanding answers and cracking down on abusive mortgage lenders. As early as 2002, a group of AGs went to court to force one of the worst offenders, Household International, to repay customers a record breaking $484 million and reform its lending practices. These state top cops recognized the predatory lending boom as a national problem, demanding a national response.

Some looked to Washington, D.C. for help. But rather than jumping on board to clamp down on the phony mortgage machine, federal regulators went in a different direction. The Federal Reserve and the Security and Exchange Commission looked the other way. Worse, in 2003, authorities at the obscure Office of the Comptroller of the Currency issued new rules that preempted many state enforcement actions and protected the banks.

Yup that's right, top bank regulators in Washington sided with the crooks and not the cops. Just think if it all could have been stopped in the first year or two that the scams was unveiled. Just think if consumers had an advocate for them in Washington, D.C. working hand and hand with the authorities at the state level. Maybe the whole mortgage meltdown could have been avoided.

It's time to put out the FIRE on Capitol Hill. The House Financial Services Committee needs to pass a strong bill, one that does not preempt states and polices both banks and nonbanks offering a wide range of financial goods and services to consumers. Anything less will surely lead to the next conflagration.

your article its really good given a very knowledgeable information good work.